Please ensure Javascript is enabled for purposes of website accessibility
Log In Help Join The Motley Fool
Free Article Join Over 1 Million Premium Members And Get More In-Depth Stock Guidance and Research
By Neha Chamaria - Updated May 3, 2021 at 10:35AM

These renewable energy stocks are growing at a rapid rate and are perfectly poised to benefit from the trend.

Renewables are projected to become the largest source of energy by 2025 , supplying nearly one-third of electricity worldwide, according to the International Energy Agency (IEA). This global transition from fossil fuels to cleaner, renewable sources of energy is clearly a massive secular growth trend, one that investors in stocks might want to cash in on. Here are three renewable energy stocks that are growing rapidly and poised for even bigger things in coming years.

NextEra Energy (NEE -1.86%) owns the largest regulated utility in the U.S., Florida Power & Light company. It also owns a competitive energy subsidiary, NextEra Energy Resources, which is the world's largest producer of solar and wind energy today. The latter's gigantic hold and growth in the renewable energy industry is largely why NextEra Energy investors have made so much money in recent years. The best part is that NextEra is already setting itself up for the next leg of long-term growth. 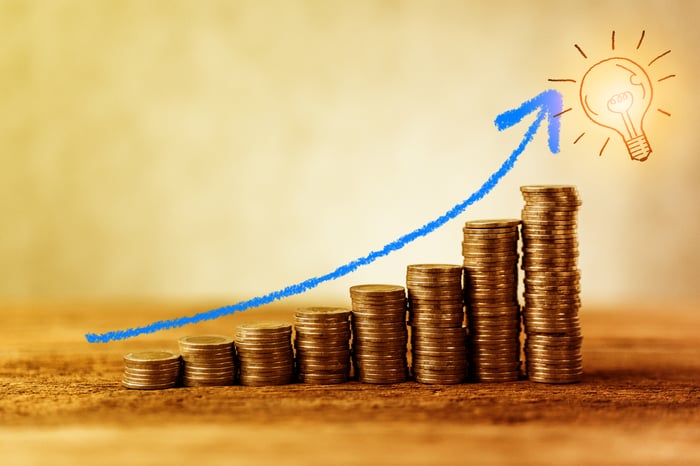 The thing is, NextEra has the financial clout to capture a bigger pie of the renewable energy market. Aside from access to external funds, NextEra can also source funds from its affiliate NextEra Energy Partners (NEP -1.92%), to which it sells renewable energy assets to raise capital to invest in growth. With NextEra's total renewable energy backlog surpassing 15 GW in its latest quarter, funding for growth shouldn't be a concern.

NextEra sees its adjusted earnings per share growing roughly 7% at the midpoint in 2021, and at the top of its 6%-8% guidance range through 2023. With operating cash flow expected to grow in line with earnings, NextEra could also easily dole out annualized dividend increases of around 10% over the next couple of years atleast – NextEra is already a rare renewable energy dividend breed given its Dividend Aristocrat status. Combined, that level of earnings and dividend growth could ensure market-beating returns for NextEra Energy shareholders.

Growth at this company is picking up

The torrid run-up in Brookfield Renewable (BEP -2.18%)(BEPC -2.91%) shares in recent years wasn't a fluke -- the company's growing rapidly, and this could just be the beginning. 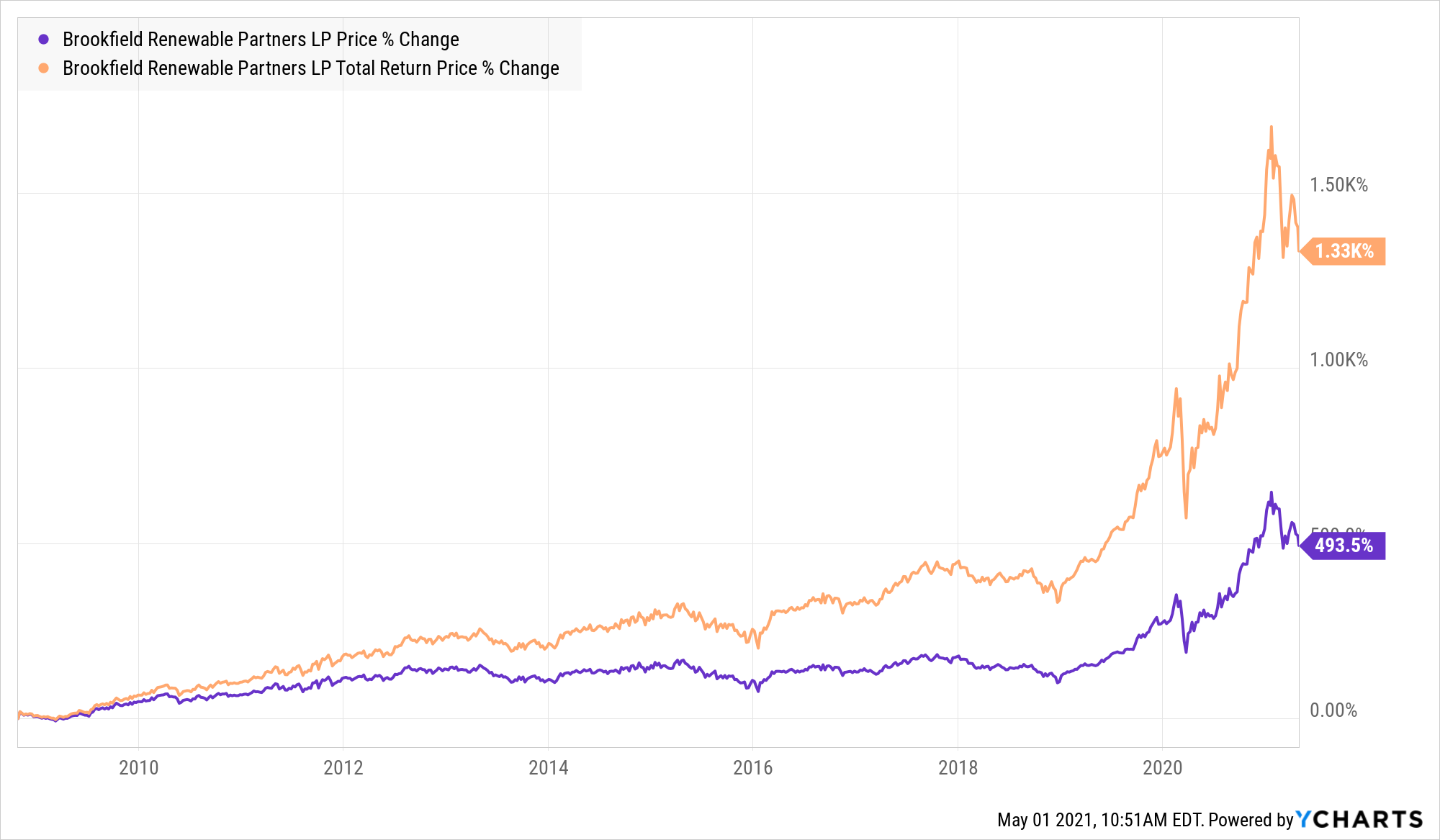 After growing its funds from operations (FFO) per unit at a 10% compound annual rate between 2010 and 2020, Brookfield has even bigger plans for the future -- it is targeting 10%-16% annualized growth in FFO through 2025. Management's plans includes pumping $3.7 billion into mergers and acquisitions at target funding cost as low as 5% to add 4%-5% to FFO over the next five years while it develops its pipeline of nearly 23 gigawatts. That's massive, as it's more than double Brookfield's existing capacity. While hydropower continues to be its largest contributor, Brookfield is diversifying aggressively into solar energy.

The 10%-plus growth visibility in FFO and the potential dividend growth that should come along with it makes Brookfield Renewable a top-notch renewable energy growth stock to have on your radar.

You've probably never heard of Azure Power Global (AZRE -9.02%), but if the prospect of renewable energy growth in the world's second most populous nation excites you, this one's for you. Azure is, in fact, the first energy company from India to list on a U.S. stock exchange.

India is on the verge of a renewable energy revolution, with plans to grow its solar and wind capacity nearly sixfold by 2030. Although coal remains the dominant source of power in the country, solar has surpassed it to become the cheapest source of energy. The setting is perfect for Azure Power, India's second-largest solar energy producer with 2 GW of solar generation capacity. But here's the real deal: Azure has 1 GW under construction and 4 GW of committed projects. That gives great visibility into the kind of revenues the company can generate in coming years.

In fact, Azure's revenues and operating income have grown at a dizzying pace in the past five years. A major competitive advantage is that nearly 85% of Azure's energy sales go to government-backed utilities and companies at fixed, predictable prices. 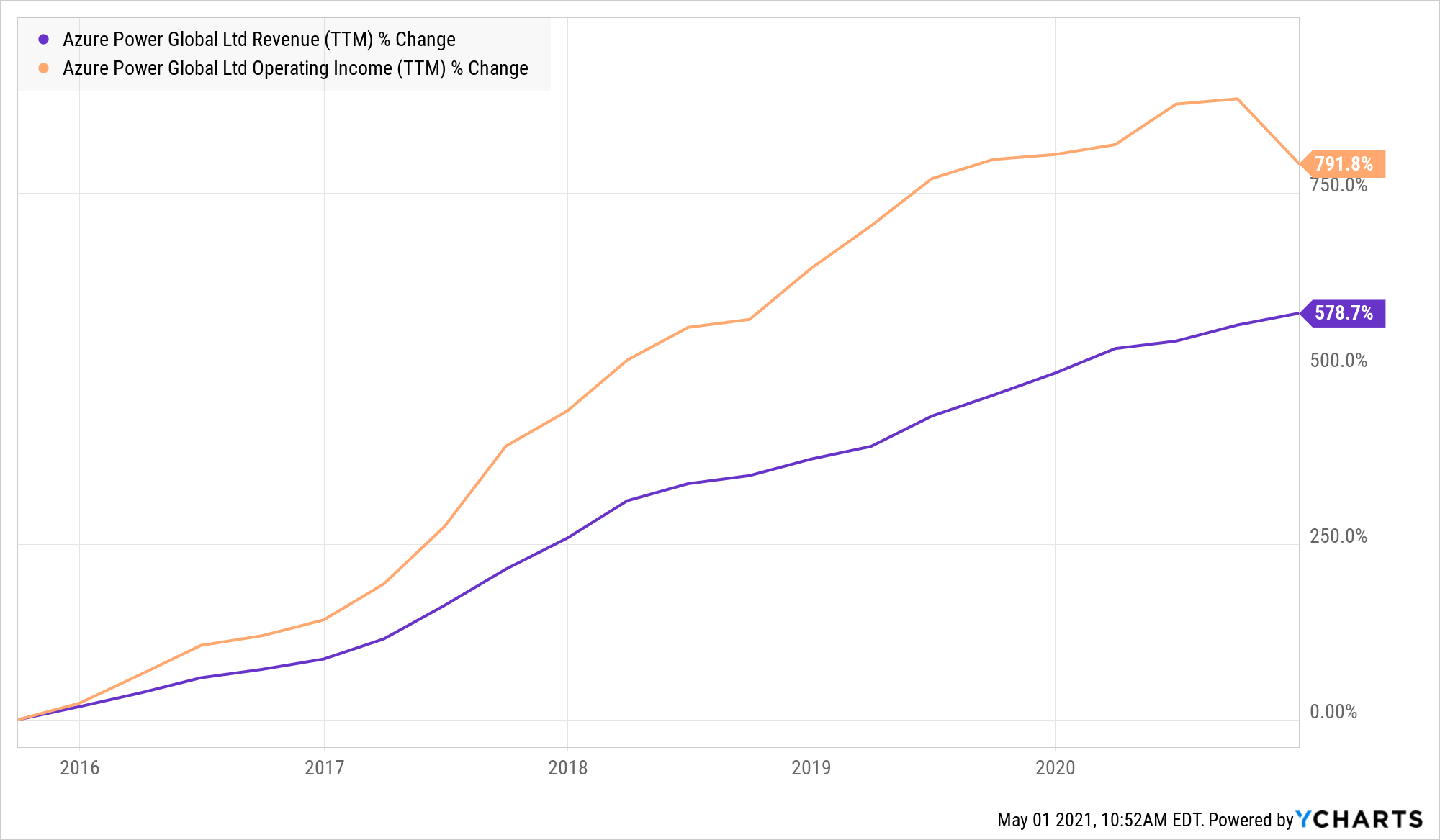 Azure projects its operational capacity to grow at a compound annual rate of 24% through 2026 and aspires to be the world's lowest-cost producer of solar energy. The latter might sound ambitious, but Azure's growth potential is undeniably big.