Please ensure Javascript is enabled for purposes of website accessibility
Log In Help Join The Motley Fool
Free Article Join Over 1 Million Premium Members And Get More In-Depth Stock Guidance and Research
By John Ballard - Updated May 7, 2021 at 11:53AM

With a third of revenue coming from "Call of Duty" last year, is Activision too dependent on this best-selling title?

That's quite a high percentage coming from a single franchise. While current engagement trends look very strong, investors must wonder if Activision Blizzard's top-selling video game is at risk of being disrupted by competition.

Strong engagement from Q1 is flowing into Q2

The dependence on Call of Duty might look like a risk, but it reflects the success of management's recent initiatives to overhaul its major franchises. Call of Duty was the first to get an overhaul, with Overwatch and Diablo coming next. 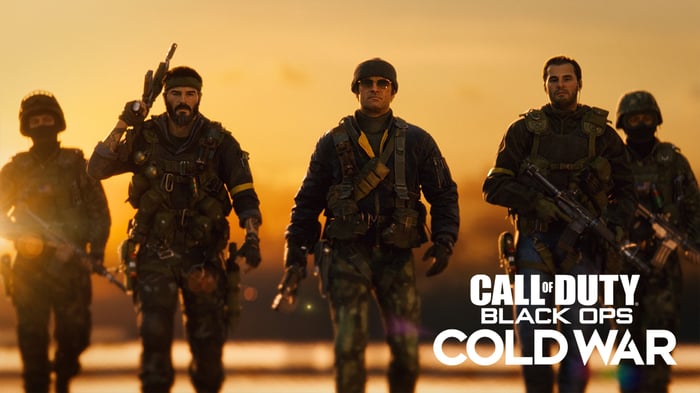 Over a year ago, Activision released free-to-play and mobile experiences to stimulate more engagement in its best-selling first-person shooter. The result is that the Activision segment now has a record 150 million monthly active users -- triple the level from two years ago.

What Activision has done is use free-to-play experiences -- Call of Duty: Mobile and Call of Duty: Warzone -- as a hook to reel in millions of new players. But as usually happens, once players get in the game, they start having fun and spend money on extra stuff that enhances the gaming experience. Activision made a whopping $4.8 billion on in-game spending in 2020 across all its franchises.

Moreover, Activision recently integrated Warzone into the premium release of Call of Duty: Black Ops Cold War that retails for $60 on PC and console. Since integrating these experiences in December, Activision has seen strong conversion to the premium game. This contributed to a 72% increase in revenue for the Activision segment in the first quarter.

While Activision benefited from millions of people staying home during the pandemic, the high engagement in Call of Duty is carrying over to the second quarter.

During the first-quarter earnings call, CEO Bobby Kotick said: "The current season of Call of Duty: Mobile is tracking as the best yet in terms of player investment in the West."

In its earnings release, the company said the first three seasons of Black Ops Cold War and Warzone were among the best seasons in Call of Duty history, as measured by in-game bookings. The third season just launched in April and is sustaining that trend.

Still, there's always the threat that an innovative new take on the first-person shooter could derail Call of Duty's momentum. Yet, the franchise has showed incredible staying power over the last year, even as a new shooter from Chinese tech giant Tencent (TCEHY -1.52%) launched its own esports title that has gained a big following.

How Call of Duty fits in the competitive landscape

The video game industry is full of creative talent that is always thinking up the next big release. For example, Tencent's Riot Games released Valorant a year ago, which might have pulled a few players away from Blizzard's Overwatch. But Call of Duty: Warzone has held its own in an increasingly competitive market.

During the Q1 earnings call, Kotick announced that the company was planning to hire 2,000 new developers by the end of next year. Kotick mentioned these plans in the context of discussing two things:

Fortnite and Valorant are currently the most popular shooters, as measured by viewership on Amazon's Twitch. Both titles rank in the top five most-watched games on the live game streaming site. But even with that competition, Call of Duty: Warzone is right on their heels in the top 10.

In fact, data from TwitchTracker shows that the average daily concurrent viewers for Warzone recently hit a new high in late April. This matches up with the recent start of season three and the launch of new free content available in the game.

The first-person shooter has been one of the most popular genres in the video game industry for decades. Activision benefits by having multiple titles in the Call of Duty franchise available across all platforms as both free-to-play and premium experiences.

Activision delivered a strong first-quarter earnings report. With new players still coming into the gaming market, and with major new releases under development on the Blizzard side, this top video game stock should remain a good investment.