This top game maker is entering a major growth cycle.

Activision Blizzard (ATVI 0.33%) has benefited enormously from the shift to the digital distribution of games over the last decade, which has boosted profits and driven a market-beating stock performance. The company's non-GAAP operating margin reached a record high last year, but going forward, Activision is targeting more revenue growth.

To accomplish that, management is accelerating its long-term plan to reach 1 billion monthly active users (MAUs) across all its games. Activision Blizzard is already seeing progress, with MAUs increasing to over 400 million in 2020, but there is much more potential in a growing video game industry. 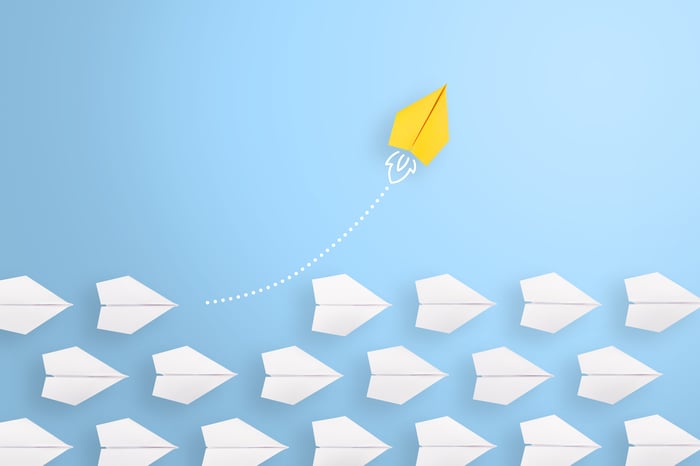 The blueprint for more growth

Activision Blizzard has several ideas to continue improving the performance of its current franchise lineup. During the fourth-quarter conference call, management mentioned several opportunities to expand across geographies, introduce new ways for players to invest in the franchises they love, and release content more frequently to keep engagement up.

Chief Operating Officer Daniel Alegre, who left Alphabet's Google to join the game producer last year, explained that, as they execute this strategy, the company "can continue to grow at an accelerated pace."

To facilitate this expansion plan, Activision Blizzard is ramping up its hiring of new engineering talent to bulk up its game production efforts. It started two years ago with Call of Duty, which translated to three new games launching within that franchise in the span of six months. With these new offerings, the franchise reached a record $3 billion in bookings in 2020.

That performance was a result of the number of players who played a Call of Duty title tripling from 70 million in 2018 to over 250 million last year. The opportunity is crystal clear: Players want more content, and management is going to give it to them.

Management is particularly excited about the opportunity to expand into mobile games. It's not only because mobile is the largest and fastest-growing category of video game sales, but that Call of Duty: Mobile was such a huge success, with the release contributing to an increase of 93 million MAUs in the fourth quarter of 2019.

The only hurdle for Activision Blizzard as it pursues the mobile market is that games like World of Warcraft and Diablo don't have quite the following of a first-person shooter like Call of Duty. Still, President of Blizzard Entertainment Jay Brack says there are many players who would be interested, for instance, in a Warcraft mobile game.

During the fourth-quarter call, Brack said: "[W]hen I think about our near and long-term development pipelines, when you look at just the Warcraft franchise alone, there are hundreds of millions of players around the world who have either played or interacted with Warcraft through different games or different expressions in that universe."

Brack is talking about potentially reaching hundreds of millions of players for a segment that had just 29 million MAUs in the fourth quarter, which has been gradually slipping by a few million per quarter lately.

Blizzard hopes to turn that around, with major projects underway, including Diablo 4, Diablo: Immortal on mobile platforms, and Overwatch 2. Brack says if Blizzard gets these games right, "[W]e think that there's a lot of potential far beyond where we are today."

If the Activision segment can grow from just 36 million MAUs in the third quarter of 2019 to over 100 million from a few releases, there's potential for Blizzard to accomplish a similar result across three major franchises.

The reward could be significant

In the near term, management believes its growth initiatives for Call of Duty, World of Warcraft, and Candy Crush will lead to strong operating results again in 2021.

"We have more new content being created than in any time in our history," Alegre said on the fourth-quarter call. "And we expect our content-related investment in 2021 to be almost 40% higher than in 2019."

It's important to keep in mind that these investments, along with the previously mentioned increases in engineering talent, are going toward existing franchises, which already have a dedicated player base of millions of players. It's not like management is throwing money at wholly new franchises that may not gain traction in the marketplace.

These are relatively low-risk, high-reward investments that will immediately tap into a large sales opportunity. That is why there is still so much return potential for this top video game stock over the long term.