Activision Blizzard (NASDAQ:ATVI) continues to perform well in 2020. Profits more than doubled year over year in the third quarter, as the trio of Call of Duty titles released over the last year have led to a big jump in digital bookings.

While some of this performance can be credited to players spending more time at home during the pandemic, it's becoming clear that Call of Duty is emerging as a growth franchise for Activision. Management believes the franchise will continue to grow next year and beyond. 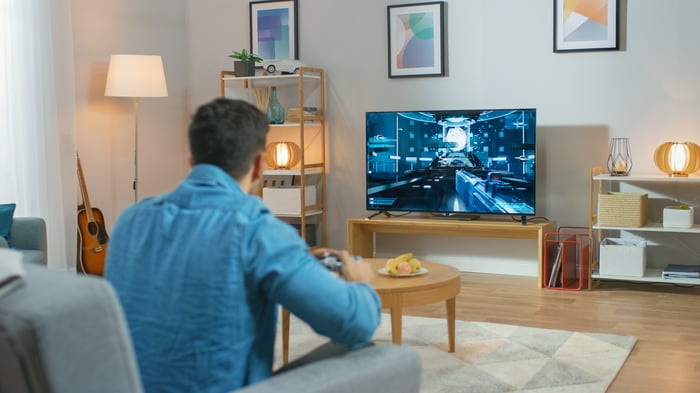 Call of Duty is a social network

Activision stock initially dropped on the earnings news, likely because of the sequential decline in monthly active users in the Activision Publishing segment, which includes results from Call of Duty. Monthly active users for the Activision segment declined by 14 million in the third quarter, now at 111 million in total. That seemed to contribute to a sequential decline in revenue from the segment. Even though segment revenue surged 270% year over year, it dropped from $993 million in the second quarter to $773 million in Q3.

But this shouldn't be concerning. To grow, Call of Duty doesn't need to increase its monthly active users every quarter. With video games, that's an unrealistic expectation, since players may try different games, causing results to be lumpy. What matters is that the most active players continue to spend money on virtual items, such as Call of Duty points, to unlock more content while playing.

Activision credited its third-quarter performance to higher in-game spending in Call of Duty: Warzone, which is free to play, and higher sales of the premium Call of Duty: Modern Warfare experience.

Most importantly, the strong results this year show how multiplayer games, like Call of Duty, are behaving similarly to social networks. Over two-thirds of players in Call of Duty play with groups of friends online, and that fuels in-game spending. "As the community engages, they consume more content," CEO Bobby Kotick said during the conference call.

The franchise has more opportunities to maintain momentum heading into 2021, starting with the release of Call of Duty Black Ops Cold War this month. During the latest conference call, management outlined a few reasons why Call of Duty should continue growing.

Activision Blizzard plans to copy its strategy with Call of Duty with other franchises, which should naturally generate more growth down the road. But for now, Call of Duty remains the company's main growth driver heading into 2021. There are three reasons management provided during the conference call that point to further growth in the franchise.

The next premium Call of Duty title, Black Ops Cold War, releases on Nov. 13. It will launch into the largest base of players in the franchise's history. It will also support cross-platform play, so that players across PC and current- and next-generation consoles can play together online. The game is anticipated to perform well, given that more players participated in the public beta testing than last year's release of Modern Warfare.

Activision is also integrating the in-game content across Modern Warfare and Black Ops Cold War, which could incentivize more players to upgrade without the worry of losing any content from the hours of play time they invested in last year's title.

Finally, Call of Duty: Mobile has been downloaded more than 300 million times worldwide, which has expanded the franchise's reach to new geographies. The game is about to launch in China, where more than 50 million players have pre-registered. During the call, Kotick said: "We see a clear path to continue growing Call of Duty's reach, engagement, and player investment on mobile in the largest mobile gaming market in the world."

It is clear that management has a strategy to grow this franchise, and it is executing. Activision Publishing President Robert Kostich said that with the plans to grow the franchise on mobile platforms, coupled with the momentum on console and PC, Call of Duty is "well-positioned for growth next year and well into the future."

Activision Blizzard should finish the holiday quarter strong. It updated its full-year outlook and now expects bookings and adjusted earnings per share to grow 26.8% and 33.3%, respectively, over 2019. With the initiatives in place to copy the Call of Duty formula to other franchises, Activision Blizzard remains a top video game stock to buy ahead of the new console launches.