Please ensure Javascript is enabled for purposes of website accessibility
Log In Help Join The Motley Fool
Free Article Join Over 1 Million Premium Members And Get More In-Depth Stock Guidance and Research
By John Rosevear - May 10, 2021 at 3:13PM

The company recorded a huge net loss after its stake in Lordstown Motors was crushed.

Workhorse Group (WKHS -11.63%) reported first-quarter revenue this morning that was much lower than Wall Street had expected, as its production of electric delivery vans got off to a slower start than planned.

Workhorse said its revenue rose to about $521,000 in the first quarter, from about $84,300 a year ago, as it delivered just six of its new C-Series electric vans to customers. Wall Street analysts polled by FactSet had expected revenue of $2.3 million, on average.

On an operating basis, excluding noncash adjustments, Workhorse's first-quarter loss widened to $16.5 million from $9.1 million a year ago. That was somewhat better than expected: Analysts on average were looking for a loss of $19.8 million.

The company also announced a new development agreement with J.B. Poindexter, a maker of specialized truck bodies for commercial vehicles. 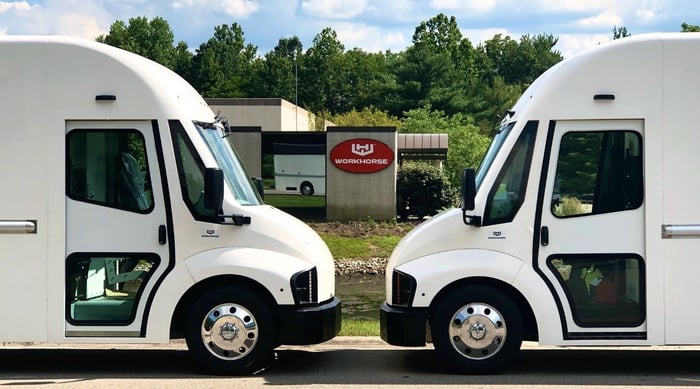 What Workhorse's CEO had to say

CEO Duane Hughes said that supplier issues and production snags limited its ability to complete vehicles in the first quarter.

"Bottlenecks within the global supply chain and offshore shipping delays of commodity raw materials and components as well as our initial stages of production limited our capacity to produce during the first quarter," Hughes said. But things are improving: "We have had a step-function improvement in production in the last month."

Workhorse said that because of the delays it faced in the first quarter, it now expects to produce just 1,000 of its C-Series vehicles in 2021. That's lower than expected; the company had said at the beginning of March that it had an order backlog of about 8,000 vehicles.