Please ensure Javascript is enabled for purposes of website accessibility
Log In Help Join The Motley Fool
Free Article Join Over 1 Million Premium Members And Get More In-Depth Stock Guidance and Research
By David Jagielski - May 12, 2021 at 5:35AM

The cannabis company is expecting lots of growth soon -- but is management too optimistic?

Since then, the stock price has gone downhill significantly. Last week, the Canopy Growth closed at just $25.26. Over the past month, it has fallen by 19%. Over the same period, the sector-benchmark Horizons Marijuana Life Sciences ETF, declined by 15%.

The cannabis giant's next earnings report is due out on June 1, and what investors learn then will likely determine whether the stock's sell-off continues or reverses. But in the meantime, investors should ask themselves whether Canopy Growth's stock has fallen far enough that it's worth taking a chance on? 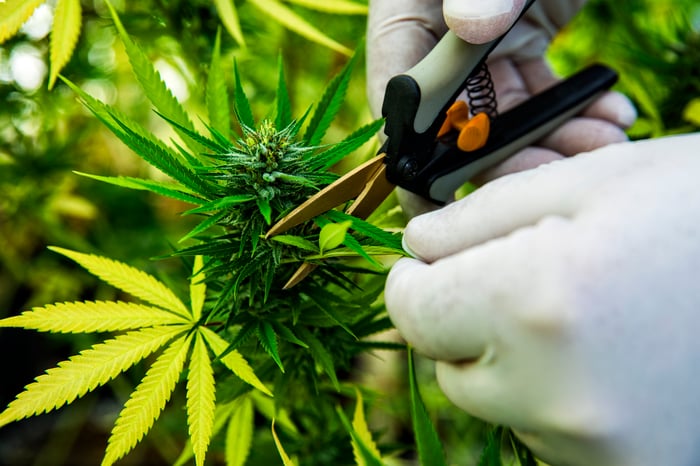 A look at its current valuation

Although Canopy Growth has lost a large chunk of its value, it has historically traded at high premiums. And that's why it is important to put its recent decline into context. Here is how it compares to rivals Aurora Cannabis, HEXO, and Tilray in terms of price-to-sales (P/S) ratios. 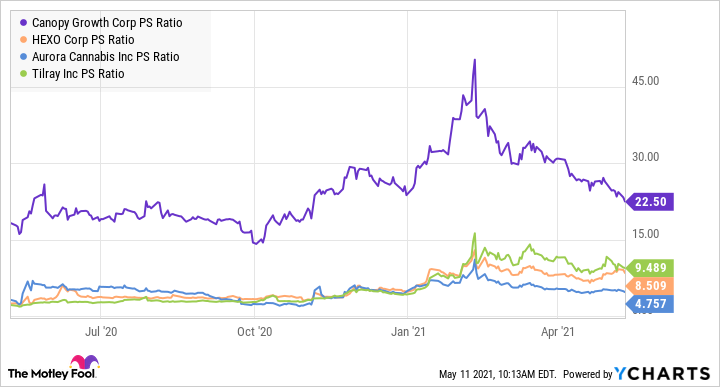 The stock has traded at a high multiple when compared to its peers in the industry for some time now, and it still does, even after its recent slide. Investors are likely paying those sizable premiums due to the stock's relative safety -- an attribute that's in part a consequence of alcoholic beverage giant Constellation Brands having purchased a 38.6% stake in the business. The large investments made by Constellation make it unlikely that Canopy Growth will run out of money any time soon.

Investors are likely also pricing into the stock the boost that the business will get when and if federal marijuana legalization in the U.S. takes place. Canopy Growth's CEO predicts that will happen within the next 12 months. Once cannabis is fully legal at the federal level, Canopy will be able to close its long-pending acquisition of Acreage Holdings and become a multistate operator overnight.

There's one more reason why investors may be willing to pay more of a premium for this company than they are for its peers: its ambitious goals.

Aiming for some aggressive targets

When the company released its fiscal Q3 numbers, it included some medium-term financial targets that -- if it achieves them -- will be downright impressive. Canopy projects that in the second half of its fiscal 2022 (which began in April), it will post positive adjusted EBITDA. It also says that from fiscal 2022 through fiscal 2024, its net revenue will grow at a compound annual rate of 40% to 50%. In addition, management forecasts that operating cash flow in fiscal 2023 will be positive, and that it will deliver positive free cash flow in the following year.

The goal that appears to be most realistic is for positive adjusted EBITDA in H2 fiscal 2022. This is a non-GAAP number, and while it would be great for the company to reach profitability by that metric, the company has fairly wide discretion about what it includes adjusted EBITDA. That's why I would take it with a grain of salt. In fiscal Q3, Canopy Growth reported an adjusted EBITDA loss of 68 million Canadian dollars, which was an improvement from the CA$97 million loss it reported a year earlier.

The more important metric to watch is operating cash flow, and the company's target there might be the longest shot of the three for it to hit. Over the past 12 months, Canopy Growth burned through CA$579 million in cash from its day-to-day operations. Let's assume that it does expand into the U.S. in 12 months, after which it ramps up its efforts to hit its lofty growth objectives and increase revenue by 50% per year. If the company is pursuing such an aggressive growth strategy, it's unlikely that it will be able to simultaneously improve its operating cash flow. And it's not as if the company is anywhere near positive operating cash flow today.

Generating 40% to 50% sales growth is possible, but Canopy Growth will likely need the U.S. to legalize marijuana for that to happen. In fiscal Q3, its sales were up 23% year over year. And while it will get bigger now that it is acquiring Supreme Cannabis, consistently growing at close to a 50% annualized rate is no easy task.

It's possible that Canopy may hit one or two of these targets. I wouldn't count on it hitting all of them.

Should you take a chance on Canopy Growth stock?

Canopy Growth is a risky investment because it is far from a cheap pot stock, and it has created some high expectations for its future. If it achieves all of its medium-term targets, it could definitely produce some exceptional returns for shareholders. But that's a big "if." As an investor, I'm wary when it comes to companies that make projections that appear far too bullish or optimistic, and that's how I would categorize Canopy Growth's currently stated targets. If you want to tap into the growth potential of the burgeoning U.S. cannabis market, you are probably better off just investing in one of the many multistate operators out there today.