Please ensure Javascript is enabled for purposes of website accessibility
Log In Help Join The Motley Fool
Free Article Join Over 1 Million Premium Members And Get More In-Depth Stock Guidance and Research
By David Jagielski - Apr 21, 2021 at 6:55AM

The company is targeting profitability in the second half of fiscal year 2022.

Canopy Growth (CGC -1.40%) has struggled to break even for years. Under then-CEO Bruce Linton, the company focused primarily on generating sales growth and uncovering more opportunities for the long term. However, now that sales growth is harder to achieve, and the pandemic shining a light on struggling businesses, investors aren't as willing to overlook a poor bottom line.

That is putting pressure on a company like Canopy Growth to start delivering better results. It has laid off staff and shut down some of its facilities in an effort to get leaner. Most recently, the company announced plans to acquire Supreme Cannabis (SPRWF), a move that it says will help it achieve its goal of getting to profitability. Should investors believe it? 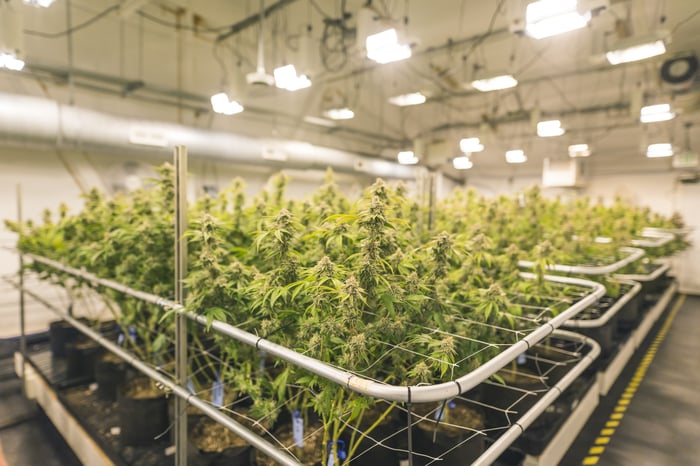 On April 8, Canopy Growth announced that it will acquire Supreme Cannabis for 435 million Canadian dollars ($348 million) in a stock-based deal. One of the key benefits of the deal for Canopy Growth is the acquisition of Supreme's brands, including 7ACRES, which it identified as one of the "leading premium brands" in Canada. Supreme's low-cost hybrid greenhouse in Kincardine, Ontario is another reason Canopy Growth investors may expect to see a boost to the company's bottom line. By selling more premium brands and operating with better margins, the business could deliver stronger results. Within two years, the companies expect to achieve cost synergies of CA$30 million.

Supreme released its second-quarter results for fiscal 2021 on Feb. 11, reporting a positive adjusted EBITDA of CA$3.6 million for the period ending Dec. 31, 2020. In the period prior to that, its adjusted EBITDA profit was a little over CA$300,000. Its gross margin (before fair value adjustments) in Q2 was a healthy 46% of net revenue, which is certainly a lot better than the 16% margin that Canopy Growth reported on Feb. 9 in its third-quarter results, also for the last three months of 2020.

But Supreme hasn't been consistent in its results. In the first quarter, which ended Sept. 30, 2020, its gross margin was a negative CA$2.2 million after impairment charges of CA$8.4 million pulled the company into the red. However, the silver lining is that after adjusting for that, its gross margin before fair value adjustments was 53%, higher than the 41% margin the company achieved a quarter earlier.

The data certainly suggests that the acquisition of Supreme can help improve Canopy Growth's financials. But the impact on the Canadian cannabis producer's bottom line may still not be all that significant. Over the past two quarters, Supreme has only generated CA$30.2 million in net revenue. In just its last quarter alone, Canopy Growth's net revenue was more than five times that tally -- CA$152.5 million.

Given the smaller stature of Supreme, simply incorporating the business into Canopy Growth's operations probably won't be enough to make the Canadian pot giant profitable. In Q3, Canopy Growth's adjusted EBITDA loss was CA$68.4 million. Even with Supreme's higher-margin products, the acquisition alone won't get Canopy Growth anywhere near breakeven. While it may be true that it will improve the company's prospects for profitability, I don't see a material impact unless Canopy Growth tries to increase the scale of Supreme's production. And that of course would add more cost and negate some of the additional revenue growth.

Canopy Growth still has a lot of work to do in cleaning up its own operations to reach its goal of positive adjusted EBITDA by the second half of fiscal 2022, which is roughly a year away.

Should you invest in Canopy Growth based on this acquisition?

Supreme adds some value to Canopy Growth's business and could help improve its operations over the long term. However, the stock is still incredibly overvalued: Investors are currently paying more than 25 times revenue for it. Even if you add the CA$80 million run rate in revenue that Supreme is at right now, that would only bring down its multiple to just under 23.  By comparison, rivals Aphria and Aurora Cannabis trade at multiples of around nine and five, respectively. Although this acquisition is a positive move forward for Canopy Growth, the pot stock is still too expensive to buy at its current valuation, especially since profitability is by no means a guarantee.