Please ensure Javascript is enabled for purposes of website accessibility
Log In Help Join The Motley Fool
Free Article Join Over 1 Million Premium Members And Get More In-Depth Stock Guidance and Research
By Herve Blandin - May 13, 2021 at 9:30AM

The identity specialist has significantly improved its cloud-based offering.

Following its disappointing fourth-quarter report back in February, shareholders of Ping Identity Holding (PING 0.11%) were wondering if the identity security specialist would be able to improve upon the disappointing revenue results from the last quarter of 2020 and the soft guidance for 2021. Based on last week's first-quarter earnings report, Ping Identity may be taking a turn in the right direction.

Founded in 2001, Ping Identity provides identity security solutions for enterprises to control access to applications and data for their employees and customers. And with the shift to cloud computing over the last several years, the tech company updated its portfolio to offer such services in any combination of cloud and on-premises environments.

With the strong demand from enterprises during the first quarter, the company posted encouraging results. Annual recurring revenue (ARR), a better measure of performance than revenue for subscription-based businesses such as Ping Identity's, grew 16% year over year to $266.3 million, slightly ahead of the guidance range of $263 million to $264 million. And given its confidence for the rest of the year, management raised its full-year outlook with anticipated annual recurring revenue in the range of $298.5 million to $300.5 million, 15.6% year-over-year growth at the midpoint.

However, because of its legacy footprint in on-premises environments and its lack of competitive cloud-native solutions, the company's performance paled in comparison to much larger rival Okta's (OKTA 0.05%). Thanks to its innovative and easy-to-use software-as-a-service (SaaS) offering, Okta generated stronger revenue growth, at a larger scale, over the last several quarters. 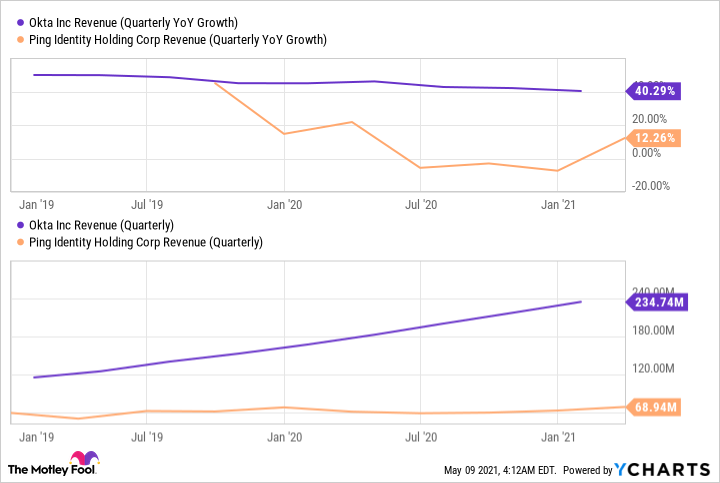 Of course, Ping Identity has been developing cloud-based capabilities over the last several years to capture a part of the large and growing cloud identity opportunities management market estimated at more than $25 billion last year. And during the first-quarter earnings call, CEO Andre Durand even announced the company has reached feature parity between its recent SaaS offering and its legacy on-premises solutions.

That's a significant milestone for Ping Identity. It can now provide its existing customers with the possibility to leverage the cloud to consume its complete range of services, such as single sign-on (one identity to access multiple applications) and other advanced security and management features. More importantly, Ping Identity can now compete with Okta to address enterprises' cloud-native identity requirements.

Yet Ping Identity's offering will remain differentiated from Okta's. Indeed, Ping Identity will stay focused on its easy-to-integrate unified solution to manage the identities of enterprises' customers and workforces, which will compete with Okta's core products.

In contrast, Okta is diversifying its portfolio. For instance, it's developing identity governance and administration features (to deal with identity lifecycles) and privileged access management capabilities (to manage accounts that require special credentials, such as administrator rights). In addition, following its recent $6.5 billion acquisition of Auth0, it will maintain Auth0's developer-friendly solution in addition to its core platform.

It remains to be seen whether Ping Identity's focused approach together with its enhanced SaaS offering will lead to improving results over the long term.

Granted, a part of Okta's richer valuation is due to its much stronger revenue growth. But given Ping Identity's improved SaaS offering and lower relative valuation to Okta's, investors looking for exposure to the vast identity market should keep Ping Identity on their watch lists.

Why Ping Stock Got Demolished Today