Please ensure Javascript is enabled for purposes of website accessibility
Log In Help Join The Motley Fool
Free Article Join Over 1 Million Premium Members And Get More In-Depth Stock Guidance and Research
By Dan Caplinger - May 17, 2021 at 5:31PM

Forget cryptocurrency -- those looking for a store of value went old school.

The stock market was in a down mood on Monday, although major market benchmarks finished near their best levels of the day as investors seemed to regain their footing as the session progressed. The Dow Jones Industrial Average (^DJI 0.09%), S&P 500 (^GSPC -0.15%), and Nasdaq Composite (^IXIC -0.16%) all suffered losses, but the small-cap Russell 2000 managed to gain a bit of ground, and even among large-cap indexes, declines were modest.

The past few months have been turbulent for stocks, but cryptocurrencies have experienced a lot of volatility. Many people have seen crypto as a store of value and a hedge against inflationary impacts on traditional currencies. Yet Monday showed that when it comes to fighting inflation, many investors want something with a history that's longer than a dozen years. Below, we'll look more closely at this Monday winner, but first, let's look at the numbers.

Major stock indexes were in the red on Monday. After having been down more than 1% at times during the day, though, the benchmarks managed to close the session with much smaller losses.

A good day for precious metals

Cryptocurrencies were down over the weekend, and some are currently off their highs by 25% or more. However, Monday was a good day for the precious metals market, which has a much longer track record as a go-to investment for those looking to protect themselves from stock market volatility in hard assets.

Gold prices climbed $21 per ounce to $1,865, which was the yellow metal's highest level since February. Silver prices saw even bigger gains on a percentage basis, jumping $0.70 per ounce to move above the $28 mark. Gains for platinum-group metals were more modest, with platinum climbing $14 per ounce to $1,236 and palladium finishing higher by $5 per ounce at $2,804. 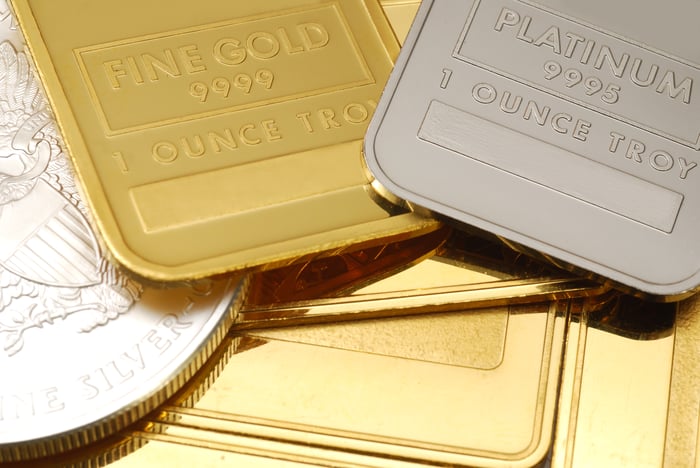 Is there really a link between gold and cryptocurrency?

On their face, the markets for crypto and precious metals are very different. Gold, silver, platinum, and palladium all have various industrial uses in addition to their status as collectibles. Some cryptocurrencies have benefits attached to them, but others are merely a vehicle for exchange. As such, there's no reason to expect a relationship between how cryptocurrency and gold would trade.

For now, though, many investors seem to see precious metals and cryptocurrencies as substitutes for each other. It's therefore possible that they'll have inversely related performance at least in the short run. Today's move up for gold as cryptocurrencies fell is just one potential example of that phenomenon, and that trend could persist in the future.

Has This Market Winner Lost Its Luster for Good?

Here's Where the New Year's Stock Market Celebration Was on Monday