Even as tech stocks rebounded, one part of the financial markets plunged.

Friday was a topsy-turvy day for the stock market, marking a fitting end to a tumultuous week. Although the Dow Jones Industrial Average (^DJI 0.03%) suffered huge declines, the drop in the S&P 500 (^GSPC 0.01%) wasn't nearly as bad. The Nasdaq Composite (^IXIC -0.30%), meanwhile, saw a nice push higher to rebound from outsized losses earlier in the week.

Yet arguably, the biggest news on Friday happened outside the stock market. Other financial markets saw big moves, with bond yields reversing lower, oil prices giving back about $2 per barrel to $61.50, and cryptocurrencies remaining under pressure. One key part of the commodities market saw the biggest hits, and that has some observers questioning whether gold has lost its shine.

Gold prices were under pressure again on Friday, building on recent losses. Gold bullion prices fell $46 per ounce, dropping to $1,729. That might not seem like a huge move, but it marked the lowest level for the yellow metal in eight months. 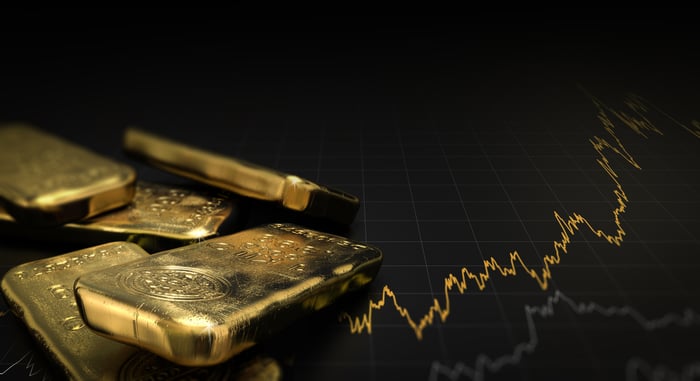 The relationship between gold and other financial markets is complex. Although bond yields eased lower on Friday, they've been pushing sharply higher since the beginning of the year. Higher bond yields do two things to hurt gold: They tend to boost the value of the U.S. dollar in which many major gold futures contracts are valued; and they make it more expensive for investors and speculators to finance purchases of the precious metal. Both of those factors played a role in pulling gold down.

To put the move in perspective, it was only last August that gold prices pushed above the $2,000 per ounce mark. Bullish investors called for a return to the same speculative frenzy that caused a 12-year bull market for the yellow metal. With concerns about the state of global monetary policy and rock-bottom interest rates, the gold market saw considerable support to keep prices higher. Now, things look a lot different, and some wonder if gold will see a repeat of the bearish conditions of the mid-2010s that pushed prices down almost all the way to $1,000 per ounce.

For some gold investors, that might seem like a good opportunity to go bargain hunting. But even though many gold miners are down substantially from their peaks last summer, they're still at elevated levels compared to where they traded in recent years. For instance, Wheaton is down by nearly 40% from its peak levels in July and August 2020, but it's up more than 20% from where it started 2020. There's no guarantee gold stocks won't see lower levels before they rebound, especially if bonds and the U.S. dollar continue their recent trends.

It's far too early to conclude that the upward move in gold prices that we've seen over the past several years has come to an end. However, with the prospects for a more adverse environment for precious metals gaining traction, it would be prudent to look at your portfolio and be aware of the potential risks if you have outsized exposure to gold and silver.

Here's What the Stock Market Truly Valued on Monday

Here's Where the New Year's Stock Market Celebration Was on Monday