Please ensure Javascript is enabled for purposes of website accessibility
Log In Help Join The Motley Fool
Free Article Join Over 1 Million Premium Members And Get More In-Depth Stock Guidance and Research
By Howard Smith - Feb 1, 2021 at 10:38AM

The price of silver is up by double digits today, and miners are joining the ride up.

Retail traders who drove up shares in the likes of GameStop and AMC Entertainment last week have shifted their focus today. Participants in the Reddit forum WallStreetBets seem to be targeting a short squeeze in iShares Silver Trust (SLV 0.72%) which is driving the price of silver almost 10% higher and bringing miners along for the ride. As of 11 a.m. EST, shares of several silver mining companies are trading higher:

Spot silver prices jumped about 10% today, the biggest single-day gain in 11 years. Several discussions about the commodity were active on WallStreetBets on Sunday night, according to CNBC. The hashtag #silversqueeze has also been increasingly trending online.

Silver miners often trade along with the price of the commodity itself as well as mining production results. 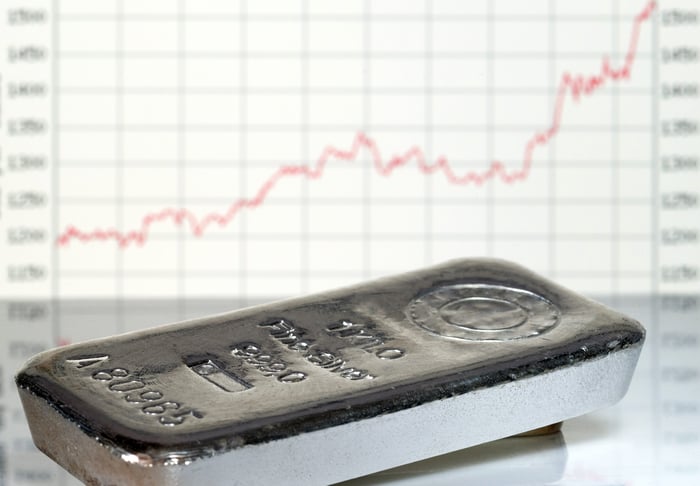 The rise in silver and associated miners' stocks actually began last week. The potential of additional fiscal stimulus moved the commodity even prior to the concerted online effort to drive prices up. But the attempted short squeeze might not be as easy to accomplish with such a large marketplace.

Investors in the sector should differentiate between the commodity and the specific miners. A rising price generally will lift all miners, but this attempt at a short squeeze isn't based on the metals' fundamentals.

As for the businesses themselves, Hecla Mining reported a 7% increase in production in 2020, representing the second-highest level ever and the highest since 2016. The miner also made progress reducing its debt load in 2020. Pan American Silver said its 2020 silver production fell below previous guidance due to pandemic impacts including suspended operations. Wheaton Precious Metals hasn't announced full-year 2020 results yet, but in November it declared a 20% increase in its dividend based on average cash generated by operating activities in the previous year.

Investing in mining stocks certainly means believing in the commodity itself. But today's moves don't reflect underlying value. The miners additionally rely on production and pricing of other metals, including gold, lead, and zinc. Investors trying to trade the Reddit-induced move today should be aware that share price moves inspired by Reddit alone will likely not hold.