Please ensure Javascript is enabled for purposes of website accessibility
Log In Help Join The Motley Fool
Free Article Join Over 1 Million Premium Members And Get More In-Depth Stock Guidance and Research
By Rich Duprey - May 18, 2021 at 8:07AM

Should you fall in love with Bumble (BMBL -4.88%), even though the market clearly did not after the female-focused dating app reported first-quarter results?

It was the first earnings report for Bumble as a publicly traded company following its February IPO, and its shares opened 4% lower after it released what otherwise appeared to be a strong performance that beat analyst expectations. So, let's see whether the market fumbled the Bumble news. 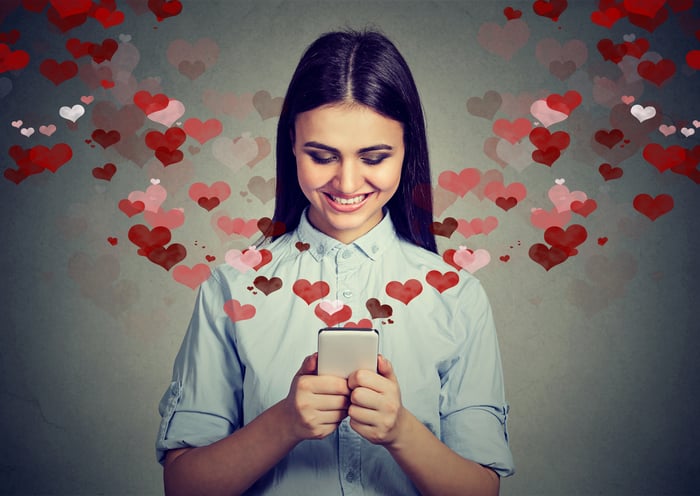 The dating app, which requires a woman to make the first move in selecting a potential partner to connect with, saw revenue for the three-month period ending March 31 rise 43% from the year-ago period to $170.7 million. On a consolidated basis -- that's Bumble and its sister app Badoo, plus other paying users -- total number of users jumped over 30% to 2.8 million, while average revenue per paying user (ARPPU) rose 13% to $19.99.

It seems Bumble has been able to reverse a lot of the concerns investors had with the business that has weighed down the stock since its IPO.

Although it had a successful launch into the public markets as it began trading at $76 a share, or 73% above its $43 per share offer price, the stock has fallen steadily since then. It closed Wednesday before the earnings release at a little over $47 a share, or slightly above the offer, but almost 40% below where most investors were able to buy the stock.

That's because despite 2020 offering perfect conditions for online dating -- locked-down, stay-at-home people looking for love and turning to mobile apps to make connections -- Bumble and Badoo didn't make nearly the dent they should have. Certainly, they did little to encroach on the dominance of Match Group (MTCH -2.49%), which did take advantage of the pandemic-driven conditions.

And with vaccinations spreading, the economy reopening, and people returning to work and public spaces, if that was the best Bumble could do, it would have a rocky relationship with the public markets.

The first-quarter results may allay some of those fears.

The Bumble business, which is the smaller of the two in terms of users, but which generates more revenue because of the premium it charges for the service, saw app revenue rise 61% in the period compared to last year, with paying users jumping 44%.

That led Bumble's ARPPU alone to rise 12% to $27.75, up from $24.84 last year, but flat sequentially as there were fewer days in the current quarter compared to the fourth quarter.

The Badoo business, which is popular in Europe and Latin America, but operates more like a traditional dating app without the woman-first focus and also has more of a social network slant for people looking for friends -- saw revenue rise 18% to $58 million on a 19% increase in paying users. This led to a 4% rise in Badoo ARPPU.

CFO Anu Subramanian said the results of both left her "confident in the strength of our business, our ability to grow users, monetize, and deliver results."

The market remains unsure, though. To a certain extent, Bumble is being weighed down by the market's general assault on tech stocks, but also the dating app needs to prove it can continue growing the number of app downloads as much as it has engagement and time spent on the app.

Match Group, which owns just about every other dating app on the market, including the top Tinder app, has over 11 million users, a 12% increase in users as Tinder users jumped 15%. Match had tried to buy Bumble once, and the app has to show it wasn't a mistake to reject the overtures.

With Match's stock also gaping lower at the open, the market's reaction to Bumble is not necessarily related to earnings. But shares aren't cheap either. It sports implied valuations equivalent to Match (which itself is elevated) and doesn't have the depth or breadth of product to match its rival.

While its female-focused orientation is trendy, it might not be enough to carry Bumble higher. There may be a lot more downside for its stock, and investors may want to wait for this recent IPO to stumble a bit more before putting a ring on it.

2 Stocks That Can Make You Richer in August