Please ensure Javascript is enabled for purposes of website accessibility
Log In Help Join The Motley Fool
Free Article Join Over 1 Million Premium Members And Get More In-Depth Stock Guidance and Research
By George Budwell - Updated May 19, 2021 at 8:41PM

Aurinia Pharmaceuticals and Agenus might be poised for a healthy growth spurt.

Biotech stocks are officially in a slump. After a rip-roaring 2020 fueled by the advent of COVID-19 vaccines and therapeutics, the iShares Nasdaq Biotechnology ETF has now lost 10% of its value in the past three months.

The industry has suddenly lost favor with investors because of a confluence of headwinds, including an apparently stricter Food and Drug Administration (FDA), the politics of the never-ending drug pricing debate, and the specter of rising interest rates and higher capital gains taxes. Seasoned biotech investors, though, know that downturns in the space are typically an outstanding buying opportunity.

Which biotech names should bargain hunters have on their radars right now? Aurinia Pharmaceuticals (AUPH 3.06%) and Agenus (AGEN 11.24%) are two small-cap biotech companies that could be downright steals at current levels. In fact, there's a decent chance that both of these names could more than double in value within the next 12 to 24 months. Here's what investors need to know about these promising biotech growth plays. 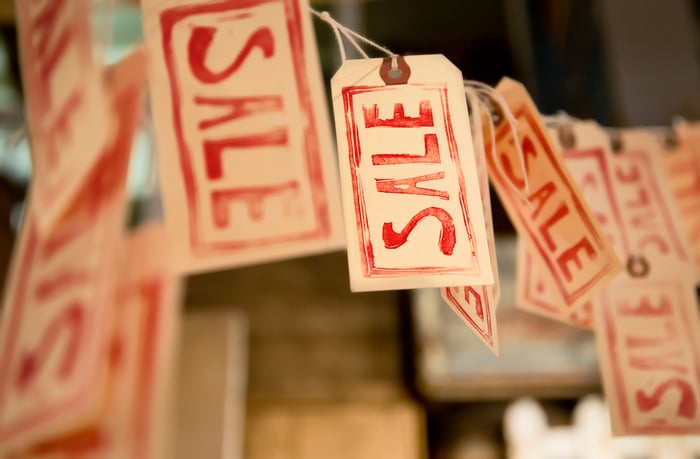 Aurinia: A possible franchise-level medication in the making

Aurinia's value proposition rests squarely on its newly approved lupus nephritis medication, Lupkynis (a.k.a voclosporin). Lupkynis is the first and only orally administered therapy for lupus nephritis, a complication arising in individuals with systemic lupus erythematosus resulting in inflammation of the kidneys.

The lowdown is that Aurinia's brain trust thinks this novel medication could generate sales in excess of $1 billion per year at peak. That's not an unreasonable forecast, given that the drug is expected to net approximately $65,000 per year per patient, and there are an estimated 100,000 adults in the U.S. who are currently afflicted with this potentially deadly autoimmune disorder.

In effect, Lupkynis would need to capture only around 16% of the target patient population to become a blockbuster product. Eventually, Aurinia -- even as a newbie to the commercial arena -- should be able to achieve this rather modest sales benchmark.

To put this peak sales forecast into the proper context, Aurinia's market cap is hovering around $1.66 billion right now. So there's definitely a strong case to be made that Aurinia's shares are indeed trading at a steep discount at present. After all, a fair number of other biopharmas with intriguing new commerical products trade at over 5 times peak sales estimates. Aurinia, in short, may be poised for a major move to the upside.

Why is the market not awarding Aurinia a richer premium? There are a few clear reasons for this discrepancy. First and foremost, Aurinia doesn't have much experience in the marketing and sales department. That's a major red flag for many biotech investors in light of the fact that most small-cap companies have trouble realizing the full commercial potential of their lead products on their own.

Second, Lupkynis is competing against GlaxoSmithKline's injected/infused lupus nephritis medicine Benlysta. Even though Lupkynis has a clear-cut advantage by being orally administered, it did get tagged with a black-box warning label from the FDA during the approval process. Glaxo's rival therapy, in turn, might sport a more compelling safety profile in the eyes of some patients and doctors.

What are the key takeaways? Aurinia is unproven as a commercial entity, and its lead product didn't get the cleanest label possible. But the biotech should still be able to rack up decent sales for Lupkynis over the next 24 months because of the well-documented need for new treatment options for lupus nephritis. Stated simply, Aurinia's upside potential arguably far outweighs its downside risk -- making it an ideal stock for aggressive, growth-oriented investors.

Agenus: The start of something big

Agenus, a small-cap immunotherapy company, posted a noteworthy gain Tuesday afternoon following a $1.56 billion licensing agreement with pharma heavyweight Bristol Myers Squibb for its bispecific antibody AGEN1777. While this licensing agreement with a top pharma company is definitely a step in the right direction, the investing community has long overlooked Agenus' other clinical assets.

As proof, Agenus' market cap has stood at less than $700 million for the majority of 2021 -- despite the company's sporting two advanced clinical candidates in balstilimab and zalifrelimab, respectively. Keeping with this theme, the biotech recently submitted a biologics licensing application to the FDA for balstilimab as a treatment for second-line cervical cancer. Agenus is also working with the FDA to file a second regulatory application for zalifrelimab plus balstilimab as a combo anti-cancer therapy. The market, in effect, doesn't appear to appreciate the company's underlying value proposition.

The bottom line is that this small-cap biotech could have two FDA-approved anti-cancer agents on the market, along with a major licensing deal with Bristol Myers Squibb, in the not-so-distant future. Bargain hunters, therefore, may want to take a closer look at this incredibly cheap growth stock soon.