Please ensure Javascript is enabled for purposes of website accessibility
Log In Help Join The Motley Fool
Free Article Join Over 1 Million Premium Members And Get More In-Depth Stock Guidance and Research
By Courtney Carlsen - May 20, 2021 at 5:05AM

Cryptocurrencies have taken the world by storm. Since 2013, the value of all cryptocurrencies in circulation has soared from $1.6 billion to more than $1.6 trillion at Wednesday's prices, and roughly $1.4 trillion of that value was added in the past year, according to CoinMarketCap.

Bitcoin (BTC 0.25%) has been the leader of the pack, thanks to its first-mover advantage as the original cryptocurrency. However, in recent months, Ethereum (ETH 0.27%) has stolen Bitcoin's thunder. In the past year, Ethereum has gained roughly 1,600%, while Bitcoin is up 300%.

The DeFi movement can't be ignored

One of the biggest innovations spurred by the Ethereum network is DeFi. DeFi uses smart contracts on the Ethereum blockchain to offer traditional financial products, like insurance or loans, without the need of intermediaries like brokerages or banks. 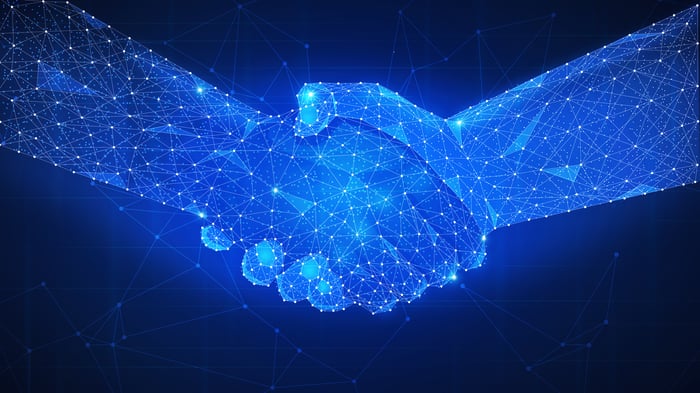 These smart contracts eliminate the need for a trusted third party to verify the transaction. Nick Szabo, an early pioneer of digital currencies, likened them to digital vending machines. Smart contracts are programmable contracts between two parties that self-execute when specific conditions are satisfied. The third party is eliminated because the contract is programmable and exists on the blockchain, a secure and decentralized form of digital ledger technology.

The ultimate goal of DeFi is to eliminate third parties and make financial products such as loans, insurance, and trading more accessible to underserved markets. According to World Bank, 1.7 billion adults across the globe lack access to banking services. However, two-thirds of those do have access to a mobile phone and internet connection, and could benefit from DeFi. Given the problem it looks to solve, DeFi is a very attractive space right now.

Etherisc sees insurance as one industry ripe for disruption by utilizing smart contracts, saying they could make the purchase and sale of insurance more efficient, lower operational costs, and provide greater transparency into the industry.

Leading the NFT trend, too

The Ethereum ecosystem is perfect for another purpose as well: non-fungible tokens.

One of the problems in the digital age is the ease with which we can duplicate digital assets like images, videos, and songs. NFTs aim to make digital products more like physical ones, by giving them scarcity, uniqueness, and proof of ownership.

NFTs have exploded in popularity in the past year. According to NonFungible, there were nearly $67 million in sales related to NFTs in 2020. So far in 2021, sales are an astounding $840 million, representing over 11 times growth from last year's total -- and the year isn't over yet. Comparing the full month of April to the same month last year, NFT sales were up 82-fold. To say NFTs have exploded is an understatement.

Ethereum is my favorite cryptocurrency

While Bitcoin was the original cryptocurrency, I think the smart contracts built into the Ethereum network make it a better cryptocurrency to invest in over the long haul. After all, there's no denying the popularity of DeFi apps and NFTs -- which are largely hosted on the Ethereum blockchain.

However, when dealing with cryptocurrencies, investors must be careful of a potential bubble, especially in the NFT space. According to NonFungible, the average sale price for crypto art had dropped 60% from its February high through the end of April. If the NFT bubble does pop, Ethereum and other cryptocurrencies will take a hit.

As an investor, it's important to understand the volatility of cryptocurrencies and allocate your capital accordingly. Despite how much I like Ethereum, I also know the price could potentially correct 40% to 60% or more due to rampant speculation in the space.

Ethereum vs. Bitcoin: Which Is the Better Buy?

Ethereum Is Up 24% in a Month. Is It a Good Investment?

What's the Difference Between Bitcoin and Ethereum?

Are NFTs a Fad or Are They Here to Stay?