Please ensure Javascript is enabled for purposes of website accessibility
Log In Help Join The Motley Fool
Free Article Join Over 1 Million Premium Members And Get More In-Depth Stock Guidance and Research
By Rhian Hunt - May 21, 2021 at 11:38AM

The market has been treating this pet food maker like a top stock, but is the bullishness justified?

FreshPet (FRPT -3.43%) posted its first-quarter financial results on May 3, and the purveyor of fresh, healthy cat and dog food came up well short of analysts' expectations on at least one critical metric. While its revenue popped year over year, the company coughed up a hairball when it came to the bottom line.

In the immediate wake of its drastic earnings miss, FreshPet share prices plunged by almost 9% in after-hours trading, and two weeks later, the stock continues to trade below its late April peak -- a thumbs-down from investors that's hard to argue with, given the company's current situation.

Here are three key takeaways from the earnings report that suggest that FreshPet might not be the best consumer staples stock to add to your portfolio right now. 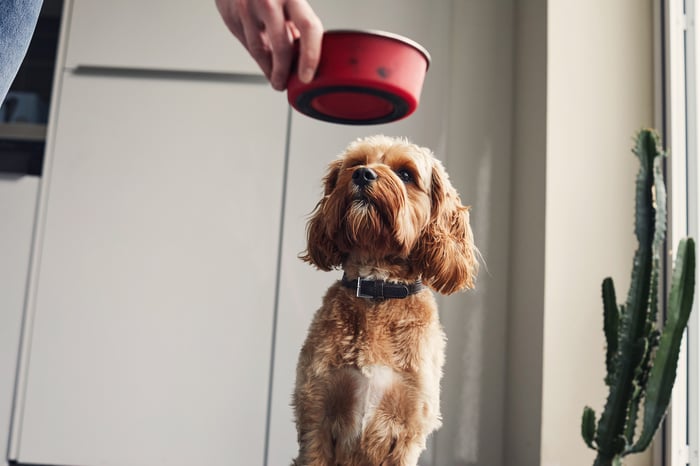 FreshPet delivered plenty of top-line sizzle last quarter as revenue jumped by 33.3% year over year to $93.4 million. Its adjusted EBITDA rose by 35.3%, and it is now selling to 4 million households. "We are in position to deliver our 2021 guidance," said CEO Billy Cyr, "and remain bullish on our 2025 'Feed the Growth' goals of 11 million households, $1.25 billion in net sales and a 25% adjusted EBITDA margin."

His bullishness notwithstanding, however, that success wasn't mirrored on the bottom line, where FreshPet generated a significantly negative earnings surprise, according to data gathered by Zacks Equity Research. Wall Street analysts' consensus expectation was for a $0.02 loss per share, but FreshPet delivered a $0.26 loss per share instead. The loss also exceeded the $0.10 per share loss it booked in Q1 2020, showing that the company's profitability is sagging despite its sales growth.

Generating losses isn't unusual for the company. In Q4 2020, FreshPet's $0.08 per share loss sharply contrasted with Wall Street's consensus forecast for a profit of $0.07 per share. By nearly every profitability metric besides sales, the company is underperforming the consumer staples sector overall, whether it's in EBITDA margin (6.3% versus the sector's 14.7%), or net income per employee (a $17,700 loss against the sector's $24,700 gain).

2. FreshPet's valuation is high for a pet food company

FreshPet's market cap, currently about $7.43 billion, ranks it among the more valuable companies in the pet food business. It is, for example, valued a billion dollars higher than Petco Health and Wellness (WOOF 1.82%), which in its most recently reported quarter (its fiscal Q4 2020, which ended Jan. 30) registered a 16% year over year rise in revenue to $1.34 billion. Petco also managed to turn those sales into profits, delivering an adjusted EPS of $0.17. Somehow, despite Petco's far greater revenue and actual profitability, investors are giving FreshPet a higher valuation.

At the end of 2020, FreshPet was trading at a forward price-to-earnings ratio of just below 240, and 13 times its projected 2021 sales. In order for its earnings to catch up to this sky-high valuation, FreshPet would need to grow its earnings by 50% every year for a half-decade, according to some estimates.

Investors are effectively gambling on the notion that FreshPet's earnings will head explosively higher and stay on a steep growth trajectory for an extended period, thus allowing the company's actual performance to eventually match the immense optimism already priced into its shares. At this point, however, FreshPet is actually generating a steady series of losses, the most recent of which was deeper than previous ones. This company appears to be moving further from that speculative period of prolonged, powerful earnings growth, not closer to it.

3. FreshPet may be struggling to fund its operations

Driving its top-line growth without significant profits is potentially putting FreshPet into something of an awkward position, given the expenses it's incurring to drive its rapid expansion. According to Cyr, despite spending hundreds of millions building new "Kitchens," as the company calls its food factories, it is still not managing to keep its products consistently in stock at the retailers that carry them. He notes a significant number of customers "have to search high and low for the FreshPet products that their pets have become accustomed to" because of failure to refill store inventories.

FreshPet had no debt outstanding as of March 31, but it will have to fund the launch of its under-construction Kitchen 3.0 somehow. The estimated price tag for that project: $300 million. With the company's potential profits getting eaten up by its expenses, and its apparent aversion to debt, it appears to be raising the funds it needs by selling common stock. In late February, it sold 2.1 million shares, gaining approximately $332 million by doing so.

This would appear to create a bind for the company. If it can only maintain the high growth that is supporting its high stock price by building expensive new facilities, it must obtain the money either through the sale of stock or taking on debt. Yet every new issue of stock dilutes the value of already-existing shares, which will undermine its ability to raise more money by selling stock in the future. On the other hand, if it eventually takes on debt, it avoids stock dilution but adds the costs of servicing that debt to its expenses -- not an ideal result when the expenses it already has are causing it to generate net loss after net loss.

Despite its string of bottom-line losses and its recent stock dilution, FreshPet remains a favorite of both investors and analysts; some major firms have written research notes with bullish predictions that they justify based on the company's sales record and projections. With the CEO asserting his confidence that the company will achieve a $1 billion sales run rate by next year, FreshPet shares could head even higher.

However, the disconnect between valuation and bottom-line performance could also be a warning sign. The company will have to make some massive improvements in efficiency and slash its expenses if it's going to bring its operations in line with its valuation. While its vigorous growth may be enough to drive those changes, FreshPet could also simply be overvalued. There could be an element of speculation behind its current stock price, with the exuberance of its reception leading shareholders to believe that there is less risk here than there actually is. Investors looking to add to their holdings of consumer staples stocks might still benefit from buying FreshPet stock, but they should recognize that it's a fairly risky investment with a moderate chance of a steep price drop in the short to medium term.