Please ensure Javascript is enabled for purposes of website accessibility
Log In Help Join The Motley Fool
Free Article Join Over 1 Million Premium Members And Get More In-Depth Stock Guidance and Research
By Taylor Carmichael - May 10, 2021 at 8:05AM

Pet food is a boring, sluggish industry with growth rates historically under 5%. Freshpet (FRPT 3.47%) is an anomaly in that its refrigerated dog and cat food is growing fast and taking market share. For its first quarter, the company reported that revenue had grown 33% year over year to $93.4 million.

That's clearly a standout result for the industry, but what's really exciting is that management is positioning itself to generate as much as 75% revenue growth by the fourth quarter. And this is not a one-time phenomenon. The company could even reach a $1 billion dollar annual run rate on its top line by 2022. Here's why Freshpet sales are set to soar higher. 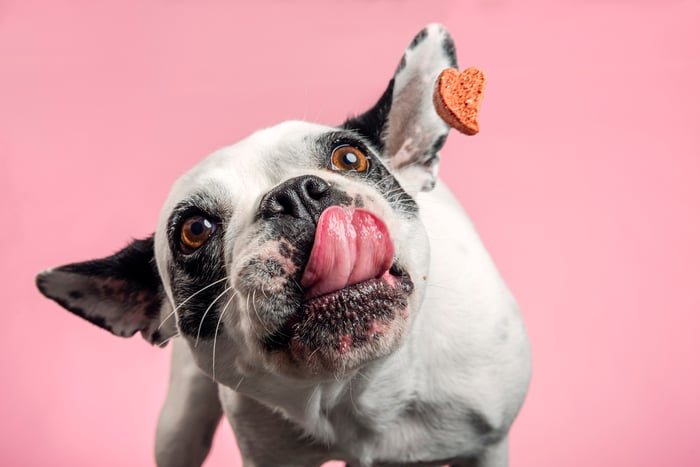 Fifteen years ago, Freshpet introduced its refrigerated food for dogs and cats. If you think about the importance of refrigeration for human food, it's a no-brainer that refrigerated pet food is also going to taste better. Several years ago, the company even conducted a human taste test on their food, and yes, people liked it too.

As an early disruptor in this industry, the company had a big head start over its peers, and Freshpet used its first-mover advantage to grab valuable shelf space in major grocery store chains, including Walmart, Target, Kroger, and Publix. In many of these stores, you will find one refrigerator in the pet food aisle, and that fridge belongs to Freshpet. Overall, the company has placed 22,890 fridges in grocery stores and pet stores.

While the company faces competitors who also use refrigeration, rival offerings are often limited to pet stores or online delivery. Recent data from sales and marketing agency Acosta showed "mass retailers" made up the largest single destination for dog and cat food shoppers. When pet owners shop for groceries, the convenience of picking up pet supplies in the same trip is important, and this is where Freshpet's established footprint in grocery stores gives the company such a lasting advantage.

Indeed, demand has been so strong, Freshpet has had trouble keeping its fridges stocked with food. As Cyr explained on the first-quarter call:

We are incredibly grateful to the customers and consumers who have stood by us during the supply challenges we had over the last six months. We know it is frustrating [...] for consumers to have to search high and low for the Freshpet products that their pets have become accustomed to. Our team has done everything they could to catch up to demand under very challenging circumstances.

Supply is rising to meet demand

Last year, Freshpet opened Kitchens 2.0, a new manufacturing facility for its dog and cat food. And the company implemented double shifts in its original facility, Kitchen South. Unfortunately, COVID-19 threw a wrench into its production plans. Cyr said on the call, "Despite those additions, our total output did not go up, i.e., we lost just as much output in our existing kitchens due to COVID testing and quarantine as we gained from these incremental operations."

Now that the pandemic is loosening its grip on the U.S., supply is rising. In April, the company reported a production rate that was 45% higher year over year. "We have now demonstrated the ability to produce at a level that will support the significant growth we are guiding to this year," Cyr added.

Management expects to "have the capacity to support a $590 million revenue run rate business by the end of this year", and that figure will jump to $1 billion by the fourth quarter of 2022. In other words, with continued strong demand, Freshpet will be able to support revenue levels of approximately $150 million and $250 million in the final quarters of 2021 and 2022, respectively.

Regarding management's official outlook for 2021, the company is guiding for revenue to hit $430 million this year. And Freshpet has already broken ground on a third production facility, Kitchens 3.0, in Ennis, Texas. That facility is scheduled to open in the third quarter of 2022. The three facilities will give Freshpet the necessary production footprint to clear $1 billion of annual revenue.

Just a year ago, Freshpet projected the company would hit $1 billion in revenue by 2025, but it now looks like this high-flying growth stock may be able to reach that milestone even sooner than expected.