Please ensure Javascript is enabled for purposes of website accessibility
Log In Help Join The Motley Fool
Free Article Join Over 1 Million Premium Members And Get More In-Depth Stock Guidance and Research
By Keith Speights - Updated May 21, 2021 at 10:32AM

Some appear to be well positioned for long-term success. But not all of them.

Many Robinhood investors are seeing green these days, and not because of their stock gains. Instead, it's a reference to the kinds of stocks that are popular on the trading platform. Of the 100 most widely held stocks on Robinhood, seven of them are pot stocks.

Which of these stocks are worthy of consideration and which should be avoided? Here are the most popular marijuana stocks on Robinhood ranked from best to worst. 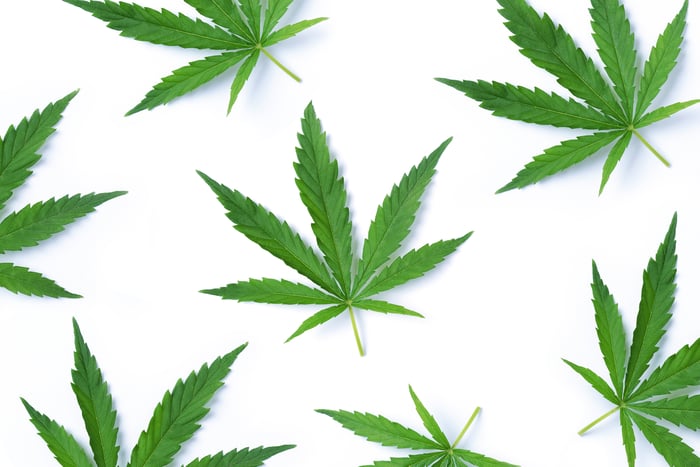 Canopy Growth (CGC -4.57%) takes the top spot among the popular Robinhood marijuana stocks for three key reasons. First, it's already a major player in the global cannabis market. Canopy is one of the leaders in the Canadian recreational market as well as the German medical cannabis market.

Second, Canopy seems to have a clear path to profitability with a hefty cash stockpile to tap in the meantime. The company expects to generate positive adjusted earnings before interest, taxes, depreciation, and amortization (EBITDA) during the second half of its fiscal year 2022, which ends on March 31, 2022. It projects positive operating cash flow for full-year fiscal 2023 and positive free cash flow for full-year fiscal 2024. Canopy's cash stockpile stood at $1.59 billion as of Dec. 31, 2020.

Third, Canopy is in the best position in the huge U.S. market. The company already markets CBD products in the U.S. It owns options to acquire U.S. cannabis operator Acreage Holdings and to buy a significant stake in Terrascend if and when federal cannabis laws are changed. Canopy also has a big partner (and largest shareholder), Constellation Brands, that can help it achieve success in the U.S. market.

HEXO sports one of the most attractive valuations among Canadian cannabis companies. Its shares trade at less than seven times trailing-12-month sales.

Tilray (TLRY -4.89%) recently closed its merger with Aphria to create, in its words, "the world's largest global cannabis company." The company ranks as a market leader in Canada's adult-use market as well as Germany's medical cannabis market.

Both Tilray and Aphria generated positive adjusted EBITDA in their most recent quarter prior to the merger. However, Aphria (which was the dominant player in the transaction) saw its revenue fall compared to the previous quarter.

The "new" Tilray already has a presence in the U.S. market with hemp foods maker Manitoba Harvest and craft beer maker SweetWater Brewery. It won't be surprising if the company makes additional acquisitions to position itself for a potential entrance into the U.S. cannabis market when federally permissible.

Unlike the top three companies on the list, OrganiGram Holdings (OGI -2.52%) doesn't have significant operations outside of Canada yet. However, OrganiGram has been successful in the Canadian adult-use market and is beefing up its position in the Cannabis 2.0 market with its acquisition of The Edibles and Infusions Corporation.

Admittedly, OrganiGram has been through a tough season. Its revenue fell in the second quarter in part due to COVID-19-related issues. Greg Engel recently stepped down as the company's CEO.

However, the stock trades at around nine times sales -- a bargain compared to many of its peers. OrganiGram also has a big partner, British American Tobacco, which owns close to 20% of the company. This relationship could open up new opportunities for OrganiGram going forward.

Cronos Group (CRON -11.87%) is another Canadian cannabis producer with a connection to a tobacco giant: Altria owns 45% of Cronos. The big investment by Altria gave Cronos a nice cash stockpile to use in expanding.

Thanks to its 2019 acquisition of Lord Jones, Cronos has a strong presence in the U.S. CBD products market. It also has another key partnership with U.S.-based Ginkgo Bioworks to develop cannabinoids using fermentation processes.

However, Cronos isn't anywhere close to profitability yet. It isn't even moving in the right direction to generate positive adjusted EBITDA.

Sundial Growers (SNDL -1.78%) vaulted into the limelight earlier this year thanks mainly to the Reddit community. The Canadian pot stock skyrocketed more than 500% at one point before giving up much of its gain.

The chief problem for Sundial is that its sales continue to decline. In its latest quarter, the company reported that its revenue slid 29% year over year and 30% quarter over quarter. However, Sundial posted positive adjusted EBITDA thanks to its investments.

Investing in other cannabis companies could enable Sundial to be successful over the long run. However, those investments come at a steep price for shareholders: The cash used for investing comes from stock offerings that dilute the value of existing shares.

Aurora Cannabis (ACB -3.64%) comes in last on the ranking of Robinhood marijuana stocks primarily because it appears to be heading in the wrong direction on several fronts. The company's revenue fell 25% year over year in its latest quarter. Aurora yet again reported a huge net loss.

Most importantly, Aurora isn't on a clear path to profitability. This has forced the company to dilute its shares to raise additional cash more frequently than most, if not all, of its peers.