Please ensure Javascript is enabled for purposes of website accessibility
Log In Help Join The Motley Fool
Free Article Join Over 1 Million Premium Members And Get More In-Depth Stock Guidance and Research
By Keith Speights - Updated May 28, 2021 at 9:21AM

Don't worry that two of them are well off their highs.

Imagine if you quit watching movies before their finish. Then Rocky Balboa would never win a boxing match, the empire would prevail over the rebel forces in Star Wars, and Snow White would never wake up.

Some investors might be ready to write off Cathie Wood. Most of her ARK Invest exchange-traded funds (ETFs) are well off their highs, with some of Wood's favorite stocks performing dismally in recent months. However, the story is far from over.

Like Rocky, Luke Skywalker, and Snow White, several of the top ARK Invest ETF stocks might be temporarily down but still have great futures ahead. Others are performing well, with a good chance that their momentum will continue. Here are three practically unstoppable Cathie Wood stocks you can buy right now. 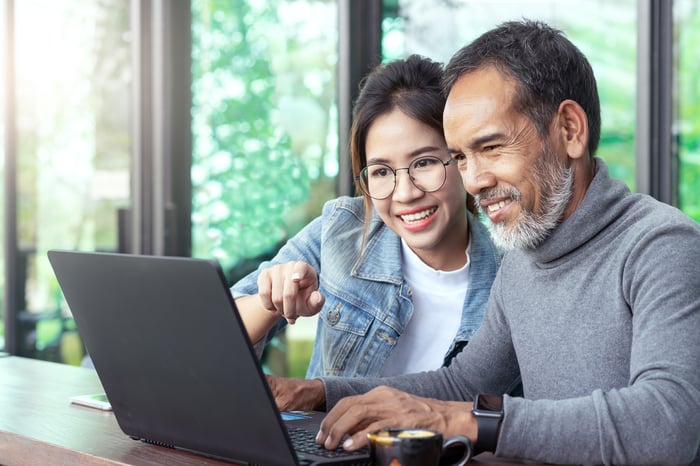 Teladoc Health (TDOC 6.13%) is close to 50% below its peak set earlier this year. Wood doesn't seem concerned about the decline, though -- she's continued buying shares of the healthcare stock for three of her ARK Invest ETFs in recent weeks.

That optimism should pay off over the long run. Teladoc has an enormous growth opportunity in the U.S. telehealth market. The company has nearly as many potential users at existing clients as it does active members. And there are many more Americans who don't currently use telehealth services than there are that do.

However, Teladoc's opportunities aren't just limited to telehealth or just the U.S. The company's acquisition of Livongo Health last year gave Teladoc a fast-growing digital health platform for chronic-disease management. Teladoc also has tremendous growth prospects in international markets. For example, the company recently signed a partnership with Generali Hong Kong that will make its virtual-care products available to the insurer's members across Asia.

Sure, Teladoc provided guidance in its Q1 update that indicated slowing growth. A slowdown is to be expected, though, after the sizzling momentum from last year fueled by the COVID-19 pandemic. Virtual care should enjoy increased demand over the next decade and beyond, and Teladoc is the company that's best-positioned to win in this market.

Square (SQ 2.28%) has taken investors on a roller-coaster ride so far this year. The fintech stock is down close to 20% from its February high. Like Teladoc, though, Square has remained one of Wood's favorites, as she has scooped up more shares for three of her ARK Invest ETFs in May.

The company's Cash App continues to deliver outstanding growth. Gross profit from Cash App soared 171% year over year in the first quarter to $495 million. Square has expanded its Cash App ecosystem to include the popular Cash Card credit card, support for buying and selling Bitcoin, and allowing users to send Bitcoin to their friends and family.

Don't forget Square's seller ecosystem, though. It's also growing briskly after navigating turbulent waters with the pandemic. The company is pursuing ways to integrate its seller and Cash App ecosystems, which should drive even more growth. For example, in the first quarter, it integrated the customer loyalty rewards program Square Loyalty with Cash App.

Square is expanding into full-fledged banking services, as well. Bloomberg recently reported that the company plans to introduce business checking and savings accounts for its customers. Look for Square to find even more avenues to generate growth in the future.

Not all of Wood's top stocks have fallen off their lofty perches in 2021. Alphabet's (GOOG 2.36%) (GOOGL 2.39%) shares are up close to 40% year to date, setting a record high. Although the ARK Autonomous Tech and Robotics ETF has sold some shares of Alphabet in recent weeks, the tech giant remains firmly in the ETF's top-five holdings.

Alphabet makes most of its money by selling ads on Google, YouTube, and its other platforms. That core business is absolutely rocking right now. But the company has other growth drivers, too.

Google Cloud continues to enjoy strong momentum. Alphabet's expertise in artificial intelligence and machine learning is especially helping provide added value to its cloud customers. Although the company's "other bets" initiatives aren't contributing significantly to Alphabet's bottom line yet, that could change in the future. Self-driving car unit Waymo, in particular, could deliver in a major way over the next decade.

What about the possibility that antitrust regulators could break up Alphabet? Maybe it will happen. However, the sum of the company's parts might even be worth more than Alphabet's current market cap. Alphabet should still be an unstoppable winner for investors, regardless of what regulators decide.