Please ensure Javascript is enabled for purposes of website accessibility
Log In Help Join The Motley Fool
Free Article Join Over 1 Million Premium Members And Get More In-Depth Stock Guidance and Research
By Dan Caplinger - Updated May 28, 2021 at 2:45PM

Surprising news from either of these much-followed companies could move the markets.

Stocks were moving higher on Friday, and the Nasdaq Composite (^IXIC 0.00%) looked to be on course to cap a good week with a modest gain. As of 2 p.m. EDT, the Nasdaq was up by about a third of a percent.

As summer approaches, it's clear that some investors have already checked out for the holiday weekend and are looking ahead. With that in mind, a couple of key stocks are going to be on Wall Street's radar next week, because the data they'll provide about how their most recent quarters went will give some indications about the state of the broader economy. Both Zoom Video Communications (ZM 3.39%) and lululemon athletica (LULU 2.69%) are set to report next week, and you can bet that a lot of people will be watching to see what they have to say.

Due for a Zoom higher?

Zoom is set to deliver its next earnings report after the end of Tuesday's trading session. The software-as-a-service stock was up almost 2% in mid-afternoon trading on Friday, but it's still a long way below the record high it hit last year.

In its last reported quarter, Zoom's amazing growth continued. Sales were up a whopping 369% during its fiscal Q4, closing a year in which revenue quadrupled. Earnings rose eightfold year over year, and the number of clients with more than 10 employees using Zoom jumped by more than five times. Metrics like net dollar expansion rates and the count of big-ticket customers bringing in at least $100,000 in revenue also jumped sharply.

However, that growth didn't prompt a big stock-price gain back then, and most people expect Zoom's growth will keep slowing this quarter. Those following the stock currently expect more than $900 million in fiscal Q1 revenue, which would be around 175% higher than year-ago levels. However, it would be just a few percentage points higher than Zoom's sales in Q4, and that kind of stagnation is exactly what investors don't want to see. The same is true on the earnings front.

Regardless of what Zoom says, some will be skeptical about its prospects. With many jurisdictions in the U.S. reopening their economies fully, the need for the company's services will be tested in the months to come. Some worry that Zoom's best days might already be behind it, despite the groundbreaking achievements that it made during the pandemic.

A big stretch for Lululemon

Meanwhile, Lululemon's stock was down almost 1% on Friday afternoon. However, the yoga and fitness apparel retailer is aiming to capitalize on rising demand as people in much of its target market start to see improving pandemic conditions that will free them to return to gyms and yoga centers. Its next financial report is due out after the close of trading on Thursday. 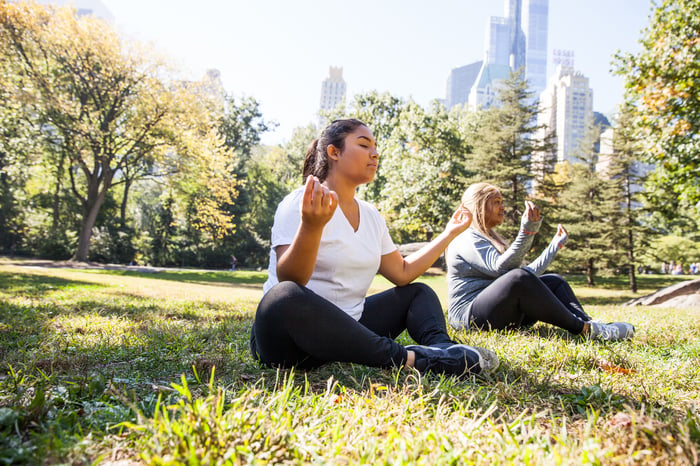 Lululemon's last earnings report, for the quarter that ended on Jan. 31, continued to show its resilience even in the face of the pandemic. Revenue jumped 24% on a 21% rise in comparable sales, as the company took full advantage of its direct-to-consumer business to make up for weakness in its brick-and-mortar retail operations. Earnings rose by 13% on an adjusted basis.

For its fiscal first quarter, investors are hopeful that they'll see Lululemon keep gaining steam. Projections for a 63% jump in revenue reflect the store closures that occurred this time last year, and shareholders anticipate that earnings will start to move back toward their pre-pandemic levels. Despite considerable competition on the athleisure front, Lululemon maintains advantages in profit margin that could boost its results well into the future.

Considered together, Zoom will offer a look at how companies that thrived during the pandemic might fare in the current environment, while Lululemon will offer a hint at what the future could hold for those businesses that struggled. The combined view could be very useful for investors across the stock market.