GM got more chips, so it can build more pickup trucks, which will make its Q2 profits fatter.

Shares of General Motors (GM -0.20%) were moving higher on Thursday after the company said that it will boost production of pickup trucks and now expects to beat its prior guidance for first-half earnings.

GM said that it will increase production at two U.S. factories that make pickup trucks: Its Flint, Michigan, facility, which produces heavy-duty versions of the Chevrolet Silverado and GMC Sierra, will build an additional 1,000 trucks a month; its midsize-pickup plant in Wentzville, Missouri, will deliver an additional 30,000 trucks by mid-July.

The added trucks from Wentzville -- Chevrolet Colorados and GMC Canyons -- were among the vehicles that GM built with missing computer chips and held until chip supplies improve. GM, like most other automakers, has had to trim production in recent months because of an ongoing global shortage of semiconductors, the result of high demand for computers and consumer electronics amid the COVID-19 pandemic. 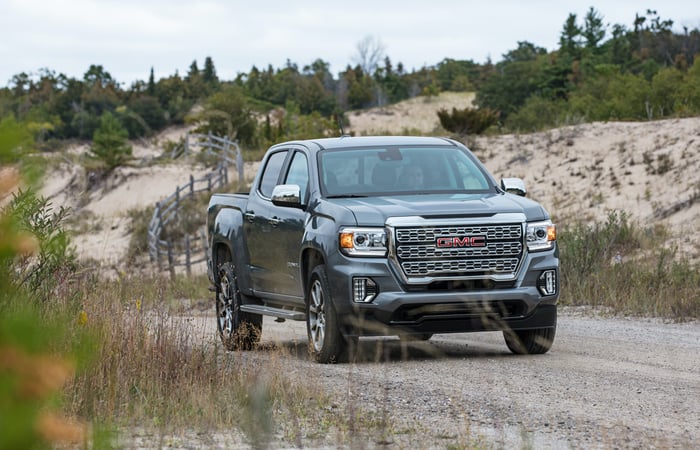 GM will ship an additional 30,000 of its popular midsize pickups by mid-July. The trucks have been held in GM lots while awaiting computer chips, which have been in tight supply. Image source: General Motors.

GM said on Thursday that it has been able to secure extra supplies of key chips, including a big order that it was able to "pull ahead" into June from later in the year. GM now expects to have enough chips to finish and deliver those trucks at Wentzville, as well as smaller numbers of other models being held at other U.S. factories, over the next six weeks or so.

As a result of the improved chip supplies and continued strong pricing at retail, GM said, auto investors can now expect its first-half adjusted earnings before interest and tax ("EBIT-adjusted" in GM-speak) to come in above the $5.5 billion it guided to in early May. The company might also beat its full-year guidance, which calls for EBIT-adjusted between $10 billion and $11 billion.

GM reported EBIT-adjusted of $4.4 billion in the first quarter. It's expected to report its second-quarter results in late July or early August.