Please ensure Javascript is enabled for purposes of website accessibility
Log In Help Join The Motley Fool
Free Article Join Over 1 Million Premium Members And Get More In-Depth Stock Guidance and Research
By John Rosevear - Updated May 5, 2021 at 5:02PM

While other automakers have faltered, GM has mostly managed to stay on course.

General Motors (GM 4.16%) surprised Wall Street with a first-quarter net profit of $3 billion, up from just $294 million a year ago, despite a series of production disruptions amid a global semiconductor shortage.

On a per-share basis, excluding one-time items, GM earned $2.25 per share in the first quarter, crushing the $1.04 per-share average estimate from Wall Street analysts surveyed by Thomson Reuters. GM's revenue, $32.5 billion, was roughly in line with estimates -- a sign that Wall Street underestimated GM's ability to generate a strong profit margin amid the chip shortage.

On a similar note, GM also said that it now expects its full-year pre-tax profit to hit the high end of its guidance range.

What GM said about the chip shortage

In a letter to shareholders, CEO Mary Barra cited "the speed and agility of our team" as a key factor in GM's ability to navigate through the chip shortage relatively unscathed.

"Our supply chain and manufacturing teams are maximizing production of high-demand and capacity-constrained vehicles," Barra wrote. "Our engineering teams are creating effective alternative solutions, and our sales teams, together with our dealers, are finding creative ways to satisfy customers despite lean inventories."

Barra said that while GM does expect to have more production cuts in the current quarter, it still expects its overall first-half results to be quite strong. She also reiterated GM's prior guidance for the full year, which calls for an adjusted operating profit between $10 billion and $11 billion -- and said that the company now expects its result to come in at the "higher end" of the range. 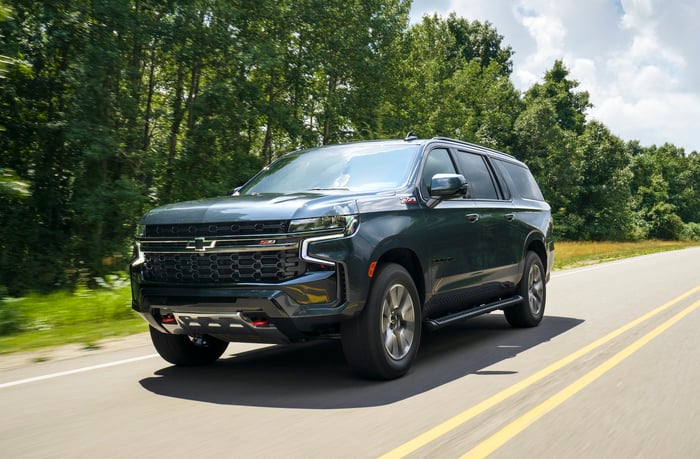 GM has prioritized production of the all-new versions of its biggest SUVs. That helped drive a very strong profit in the first quarter, despite revenue that was down slightly year over year. Image source: General Motors.

GM took no significant special items in the first quarter of 2021. A year ago, it booked $489 million in one-time charges related to restructuring in Australia, New Zealand, and Thailand.

Looking ahead: GM reiterated its 2021 guidance with an upbeat note

As I mentioned above, GM reiterated the full-year guidance it provided in February, with a new note that it now expects its results to come in at the high end of the ranges. For reference, here's what GM told auto investors to expect in 2021:

That guidance includes GM's current estimate of the net impact of the ongoing semiconductor shortage, $1.5 billion to $2 billion of EBIT-adjusted, and $1.5 billion to $2.5 billion of adjusted automotive free cash flow. But, GM said, the chip shortage will not affect its electric-vehicle and longer-term growth plans, and the company will continue to prioritize production of pickups, its new full-size SUVs, and electric vehicles in the near term. 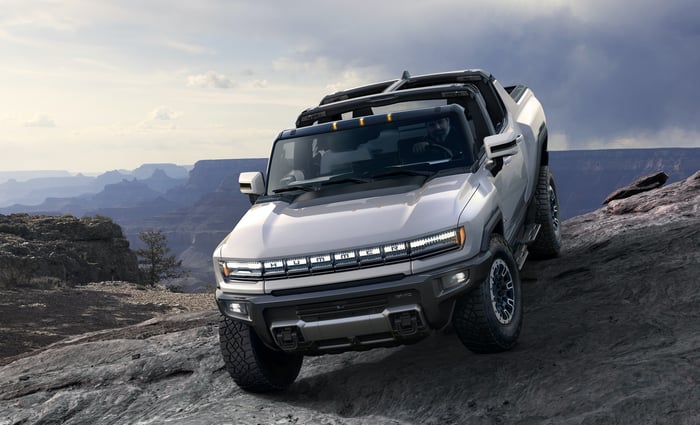 GM reiterated that its upcoming wave of electric vehicles, including the GMC Hummer EV, remain on schedule despite the chip shortage. Image source: General Motors.