Please ensure Javascript is enabled for purposes of website accessibility
Log In Help Join The Motley Fool
Free Article Join Over 1 Million Premium Members And Get More In-Depth Stock Guidance and Research
By John Rosevear – May 6, 2020 at 3:53PM

Ford and FCA both posted losses, but GM made money. Here's how.

General Motors (GM -0.94%) surprised Wall Street with a first-quarter net profit of $294 million, as strong demand for its profitable new pickups more than offset the severe impact of factory shutdowns amid the coronavirus pandemic.

GM also confirmed that it plans to restart many of its factories in the U.S. and Canada on May 18, with extensive safety measures in place to protect workers.

GM's shares surged in early morning trading after the news was released.

How GM managed a profit amid a pandemic

This was an extraordinary quarter for GM, of course. The COVID-19 outbreak forced GM to idle its factories, first in China and then in most of the rest of the world, depriving it of much of its revenue for parts of the quarter.

During GM's earnings call, CEO Mary Barra emphasized that had it not been for the pandemic, this was shaping up to be a very good quarter for the company. I think most auto investors would agree that under the circumstances, it still was a good quarter: GM managed a net profit, while Detroit rivals Ford Motor Company (F -0.67%) and Fiat Chrysler Automobiles (FCAU) both swung to losses.

How did it do that? The key seems to have been good sales of GM's new-for-2019 full-size pickup trucks. Combined sales of the light-duty versions of the Chevrolet Silverado and GMC Sierra were up 31.9% from a year ago, in a quarter when sales of many of GM's mainstay crossovers were down year over year. New heavy-duty versions of the GM Sierra also did very well. 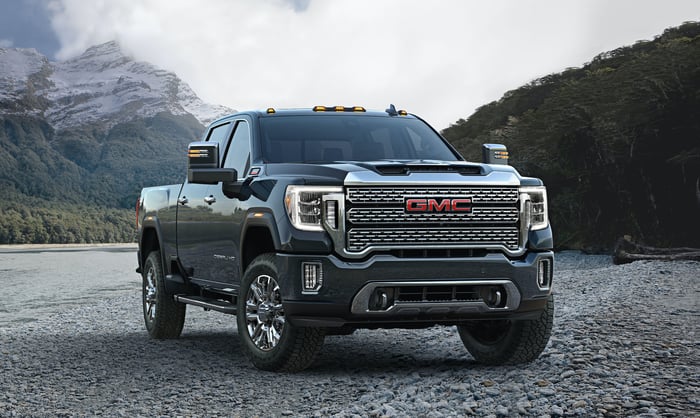 The upshot? Good margins in GM's most important region. Despite the factory shutdowns and lower dealer traffic in March, GM managed $2.2 billion in EBIT-adjusted in North America, good for an 8.5% EBIT-adjusted margin.

That more than offset a $551 million EBIT-adjusted loss from GM's rest-of-the-world International unit, which was hit hard by the earlier timing of the pandemic's impact in China, as well as a drop in pre-tax income from GM Financial to $230 million from $359 million a year ago.

GM's special items in the first quarter consisted of $489 million in one-time restructuring charges, much of that related to an earlier decision to shut down factories and engineering offices in Australia and Thailand as part of its ongoing global restructuring.

As of March 31, GM had $32.1 billion in cash on hand and additional available credit lines of $1.4 billion, for a total of $33.4 billion in liquidity available to its automotive business. Against that, after drawing down most of its lines of credit in March, it had $30.3 billion in debt.

CFO Dhivya Suryadevara said that even without restarting production, GM has sufficient cash right now to maintain operations well into the fourth quarter. She noted that the capital markets remain open to GM, and the company might choose to raise additional cash to cushion its balance sheet.

Looking ahead: No full-year guidance, but factories will open soon

Suryadevara said that GM will wait to provide investors with updated guidance for 2020 until the level of demand for new vehicles becomes clearer in the U.S. (She noted that GM's sales in China were up year over year in April.)

GM confirmed that, like FCA, it is planning to restart some of its factories in the U.S. and Canada on May 18. (Negotiations with officials in Mexico about restarting production are ongoing, Barra said.) In the near term, GM will prioritize production of pickups and its new full-size SUVs, ramping up its factories' outputs as market demand and its suppliers' production allow.