Please ensure Javascript is enabled for purposes of website accessibility
Log In Help Join The Motley Fool
Free Article Join Over 1 Million Premium Members And Get More In-Depth Stock Guidance and Research
By John Rosevear - Updated Apr 29, 2020 at 10:03AM

But the company has enough cash to hold out until at least the end of 2020.

Ford Motor Company (F 2.13%) said that its second-quarter operating loss could exceed $5 billion, but it has enough cash to stay afloat at least through year-end, even if can't reopen its factories.

As expected, Ford reported a net loss of $2 billion for the first quarter, following the abrupt shutdown of most of its factories in mid-March as COVID-19 spread around the world. On an adjusted basis, excluding one-time charges, Ford lost $0.50 per share.

There were few surprises in the automaker's first-quarter earnings report. But there were some items of note in Ford's review of actions taken since its factories were idled, and in its outlook for the next few months.

Strong sales of the new Explorer helped Ford to a small profit in North America, despite the effects of the coronavirus pandemic. But Ford's other regions all lost money in the first quarter. Image source: Ford Motor Company.

Despite the costs of the factory shutdowns, Ford's North America unit was able to post EBIT of $346 million, as strong sales of SUVs and steady demand for trucks helped offset the high costs. But that profit was more than offset by EBIT losses in Ford's other regional units: $113 million in South America; $143 million in Europe; $241 million in China, where the pandemic peaked in the middle of the quarter; and $26 million in its rest-of-the-world International Markets Group.

The automaker took a total of $287 million in one-time charges in the first quarter, most related to its ongoing European restructuring and some provisions in the new United Auto Workers contract signed late last year.

The company raised an additional $8 billion via a bond issue on April 17, much of which appears to have been used to cover the unwinding of its working capital. As noted above, it had about $35 billion in cash remaining as of April 24. 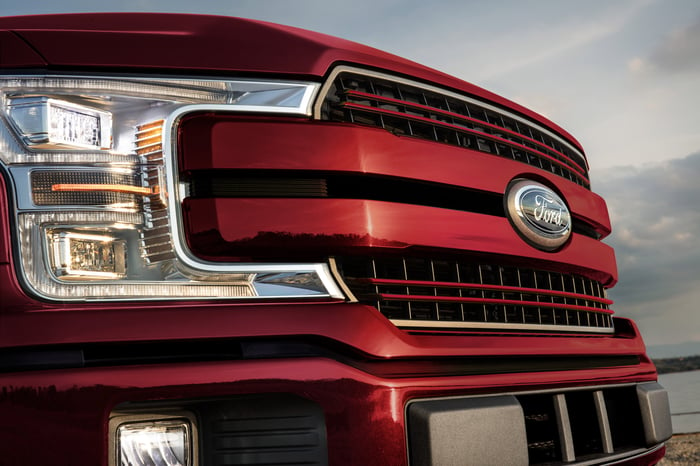 Ford's guidance for the next few months

As noted above, Ford warned auto investors that its second-quarter adjusted EBIT would likely be a loss of more than $5 billion. It summarized the items that went into that estimate:

Official first-quarter results were in line with the preliminary results it released earlier this month. For the record, here they are: