Please ensure Javascript is enabled for purposes of website accessibility
Log In Help Join The Motley Fool
Free Article Join Over 1 Million Premium Members And Get More In-Depth Stock Guidance and Research
By John Rosevear - Apr 26, 2019 at 5:54AM

Ford Motor Company (F 3.89%) said on April 25 that it earned net income of $1.1 billion in the first quarter of 2019, down 35% from a year ago on nearly $600 million in one-time charges related to overseas restructuring efforts.

But the profit decline arguably wasn't the real story. Excluding those one-time charges, Ford earned $0.44 per share, well ahead of the $0.26 per-share average estimate from Wall Street analysts polled by Thomson Reuters, as the company's adjusted operating income rose 14% to $2.4 billion.

Ford's automotive segment revenue of $37.2 billion also came in ahead of the analysts' $37.05 billion average estimate, despite a 14.3% decline in wholesale shipments. 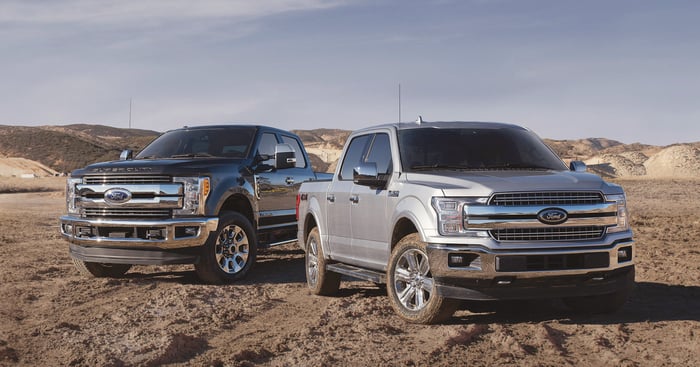 Here's a look at how each of Ford's business segments performed in the first quarter of 2019. Note that all financial results in this section are reported on an EBIT basis, except as noted.

North America: Ford earned $2.2 billion in North America, up $270 million from a year ago on an improved "mix" of vehicles. Simply put, Ford's sales of (lower-margin) cars fell significantly, while sales of higher-margin F-Series and Ranger pickups and Transit commercial vans were strong. The upshot: An improvement in profit despite a 5% drop in overall sales.

Ford's EBIT margin in North America, a widely watched number, improved to a healthy 8.7% from 7.8% a year ago.

South America: Ford lost $158 million in South America in the first quarter, a bit worse than the $149 million it lost in the first quarter of 2018. Strong pricing gains and incremental cost improvements were offset by unfavorable exchange rates and local inflation. During the quarter, Ford announced that it will close a truck factory in Brazil by the end of 2019, incurring total charges of about $460 million. Ford said that move will pay for itself in about two years.

Europe: Ford earned $57 million in Europe in the first quarter, down from $119 million in the year-ago period on unfavorable changes in the value of the euro versus the dollar. While Ford's wholesale shipments in the region dropped 13% from a year ago, pricing improvements more than offset the financial impact of the sales decline. Costs were roughly flat from a year ago, aided by some early gains from an ongoing restructuring effort.

China: Ford lost $128 million in China in the first quarter, an improvement of $22 million from a year ago. Hefty cost reductions and (for once) a favorable exchange-rate swing more than offset the effects of a 48% year-over-year sales decline. Equity income from Ford's joint ventures with Chinese automakers was negative, a loss of $41 million versus a $138 million profit a year ago.

Asia Pacific: Ford Asia Pacific (which now excludes China) earned $19 million in the first quarter, down from $31 million a year ago. While the region remained profitable, unfavorable exchange-rate movements more than offset gains from improved sales and cost reductions.

Ford Credit: Ford Credit generated profit before tax (EBT) of $801 million, a 25% improvement from a year ago. Lower depreciation on leased vehicles and improvements in credit losses drove the gains.

About those one-time charges

Ford's strong improvement in adjusted EBIT was more than offset by $592 million in one-time charges. Much of that total -- $514 million, to be exact -- was related to a series of cost-reduction actions in Europe and South America, including the closure of that truck factory in Brazil and a wind-down of some of Ford's operations in Russia. Much of the remainder was related to Ford's decision to cancel production of the next-generation Focus in North America.

All but $136 million of the one-time charges were non-cash accounting charges, Ford said.

Looking ahead: Ford's guidance for 2019

Ford elaborated somewhat on the vague guidance it gave in January. It now expects revenue, adjusted-EBIT margin, and adjusted return on invested capital to improve in 2019 versus its 2018 results. The company is still declining to give specific targets for 2019, though CFO Bob Shanks did say in an interview that costs related to new-product launches and Ford's ongoing restructuring will weigh against earnings as the year unfolds.

Long story short: While Ford's adjusted EBIT was quite good in the first quarter, Shanks said that it may be less impressive as the year goes on -- but the full-year result in 2019 will be better than 2018.