Please ensure Javascript is enabled for purposes of website accessibility
Log In Help Join The Motley Fool
Free Article Join Over 1 Million Premium Members And Get More In-Depth Stock Guidance and Research
By John Rosevear - Updated Apr 17, 2019 at 10:00AM

Ford Motor Company (F 3.89%) said that it has decided to stop selling passenger vehicles in Russia. Ford and its Russian joint-venture partner will restructure their deal, ending production at three factories in the country while continuing to produce commercial vans.

Of particular interest to Ford shareholders: Ford said the moves will lead to a series of one-time charges that could total as much as $500 million.

Check out the latest earnings call transcript for Ford. 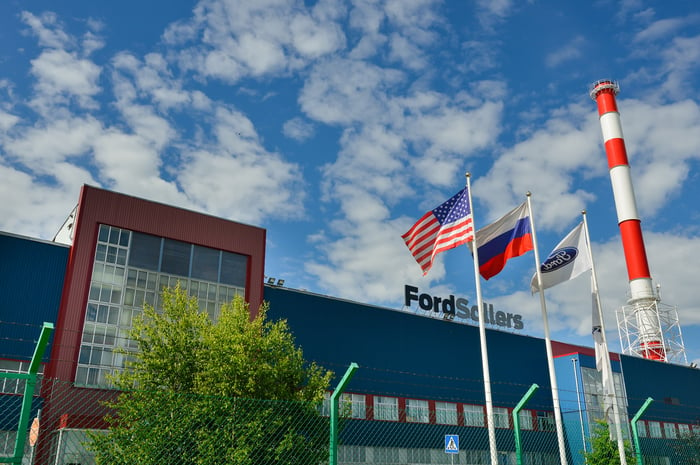 This factory near St. Petersburg builds Ford's Focus and Mondeo sedans for Russian customers. Ford and its Russian joint-venture partner will soon close the factory and two others because of slow sales. Image source: Ford Motor Company.

What Ford said about its plan to shutter 3 Russian factories

Simply put, today's news is that the joint-venture partners have reworked their deal, all but the Transits will be discontinued in June, and three of the venture's four factories will be closed.

Sollers will own 51% of the joint venture as the partners focus on expanding sales of Ford's commercial vehicles in Russia.

"This represents an important step toward Ford's target to deliver improved profitability and a more competitive business for our stakeholders," Armstrong said, noting that the focus on commercial vehicles should help Ford earn better returns on its invested capital.

About those one-time charges

Ford said that these moves will generate between $450 million and $500 million in one-time pre-tax charges. Those will include roughly $250 million to $300 million of "non-cash" accounting charges related to accelerated depreciation and amortization of Ford's facilities and inventory in Russia.

The remainder, roughly $200 million, will be cash charges related to separation payment for workers at the three factories slated to close, and termination payments due to suppliers of parts for the vehicles that have been discontinued.

Most of these charges will be recorded in 2019, Ford said.

Ford has said that its global restructuring effort will generate a total of about $11 billion in charges over the next few years, with about $7 billion of those charges being cash charges; these Russia-related charges are included in those totals.

For Ford shareholders: Is this good news?

Ford has been making moves around the world to cut less-profitable lines of business while investing in new products and businesses that had the potential to generate better margins over time. As part of that process, back in January, Ford said that it had begun a "strategic review" of its Russian business, with results to be announced in the second quarter of 2019.

If anything, this review was overdue. Ford Sollers' sales and profits have been under pressure for several years. New-car sales in Russia have been slow to recover after an economic downturn a few years ago, and the Russian consumers who are buying new vehicles have increasingly favored lower-priced -- and less profitable -- vehicle types.

This isn't the first time that Ford and Sollers have reworked their deal. About a thousand jobs were cut in 2014 after heavy losses, and Ford took control of the joint venture a year later, after rival General Motors (GM 5.55%) announced that it would exit the Russian market.

But Ford's nearly decade-old Russian joint venture hasn't been worth the effort. Ford Sollers' factories are still underutilized, and Ford has never come close to generating the returns it had expected on its invested capital.

With sales of commercial vehicles the only bright spot in a picture that has been bleak for years, today's announcement isn't much of a surprise. In that sense, it's good news for investors -- as well as a reminder that Ford has more work to do around the world.