Please ensure Javascript is enabled for purposes of website accessibility
Log In Help Join The Motley Fool
Free Article Join Over 1 Million Premium Members And Get More In-Depth Stock Guidance and Research
By John Rosevear - May 5, 2020 at 2:11PM

The company has plenty of cash, but said that it might raise more.

Fiat Chrysler Automobiles (FCAU) said that it lost 1.7 billion euros ($1.85 billion) in the first quarter, down from a profit of 1.1 billion euros a year ago, as the coronavirus pandemic disrupted its production and sales in key markets around the world.

Fiat Chrysler Automobiles (FCA), which suspended its guidance for 2020 when it shut down U.S. factories on March 18, didn't provide revised guidance for the year with its earnings report. But it did say that it is "fully prepared to restart production" around the world as conditions allow, and that it has ample liquidity to ride out the COVID-19 storm.

What happened at FCA during the first quarter

Here's how things played out at each of FCA's business units.

This happened after the end of the first quarter, but we should note here that in April, FCA and its banks agreed to a new revolving line of credit for 3.5 billion euros.

There might be more liquidity-enhancing moves to come. FCA said in a statement that investors should expect it to raise more cash if needed: "We continue to assess all funding options and expect to access funding as and when available on reasonable terms to further strengthen our balance sheet and enhance our liquidity to optimize our financial flexibility." 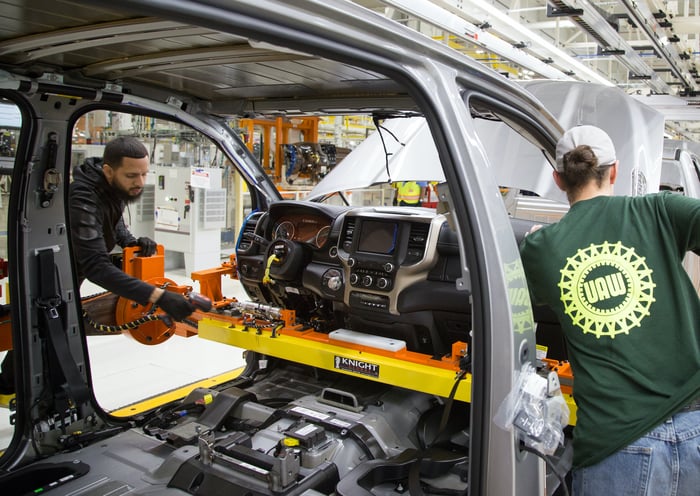 FCA said that it expects to reopen all but one of its U.S. factories during the week of May 18. But the UAW hasn't yet agreed to that plan. Image source: Fiat Chrysler Automobiles.

When will FCA reopen its factories?

(The March 31 debt and liquidity figures don't include that new credit line for 3.5 billion euros that FCA set up in April.)

Looking ahead: FCA's expectations for 2020

FCA didn't provide auto investors with updated guidance for 2020, citing the continuing uncertainties amid the pandemic. But it did provide its outlook for the overall industry in its four key regions around the world.

For the full year, FCA currently expects that: