Please ensure Javascript is enabled for purposes of website accessibility
Log In Help Join The Motley Fool
Free Article Join Over 1 Million Premium Members And Get More In-Depth Stock Guidance and Research
By John Rosevear - Updated May 7, 2019 at 8:34AM

Operating profit fell 29% as sales slowed in the U.S. and Europe. 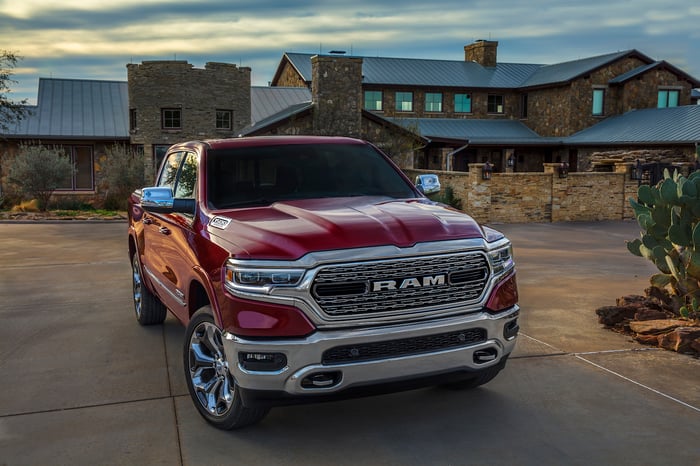 A note about the sale of Magneti Marelli

In a deal that was first announced last year, FCA sold its parts subsidiary, Magneti Marelli, to Calsonic Kansei. Although the transaction closed in the second quarter (on May 2), FCA presented its first-quarter results on a "continuing operations" basis, as if Magneti Marelli had been sold before the quarter began.

FCA received 5.8 billion euros in cash for Magneti Marelli. Some of that will be passed on to shareholders: FCA's board directors approved a one-time dividend of 1.30 euros per share. That dividend will be paid on May 30.

How FCA's business units performed in the first quarter

NAFTA: FCA's North American unit earned 1.044 billion euros, down 14% from a year ago on a 14% decline in shipments. In the year-ago period, FCA was selling new-generation Jeep Wranglers alongside deeply discounted outgoing models, boosting overall Jeep volumes and making for an unfavorable comparison. Chrysler and Dodge sales volumes also fell in the quarter, though an increase in Ram truck sales partially offset those declines.

APAC: FCA's Asia, Pacific, Africa, and China region lost 9 million euros in the first quarter, versus a profit of 10 million euros in the year-ago period. It was arguably a good result under the circumstances: Combined shipments, which include results from FCA's joint ventures with Chinese automakers, fell 30%; FCA was able to offset some of the decline with cost cuts and a somewhat more profitable mix of products sold.

EMEA: FCA's Europe, Middle East, and Africa region lost 19 million euros in the first quarter, down from a profit of 220 million euros a year ago. The story here wasn't good: Shipments fell 12%, in part because of a planned product shuffle; pricing pressures and increased costs related to regulatory compliance also weighed on results.

LATAM: FCA's Latin America unit continued to buck the regional trend, posting a profit of 105 million euros (up 31%) while rivals including Ford suffered losses. FCA's shipments in the region fell 9% on weakness in Argentina, but pricing gains and a one-time tax benefit in Brazil helped keep revenue roughly flat.

Maserati: FCA's luxury-vehicle brand, which reports results globally, earned 11 million euros in profit in the first quarter, down from 85 million euros a year ago. FCA reduced production in the quarter to help dealers clear out inventories; that led to a 41% drop in shipments and a 38% year-over-year decline in revenue.

FCA took a total of 246 million euros in restructuring-related one-time charges in the first quarter. Those charges were partially offset by a 164-million-euro one-time credit related to a reversal of tax liability in Brazil; the upshot was a net charge of 103 million euros against first-quarter earnings.

Looking ahead: FCA is maintaining 2019 guidance

FCA reiterated the mostly upbeat full-year guidance it gave in January. For 2019, it still expects: