Strong pricing on new pickups -- and a big gain on its stake in Lyft -- helped GM to a good quarter.

General Motors (GM 0.87%) said on April 30 that its first-quarter net income nearly doubled from a year ago, to $2.1 billion, as strong pricing on trucks and SUVs -- and a boost from GM's investment in Lyft (LYFT -1.50%) -- helped offset production disruptions and ongoing weakness in China. 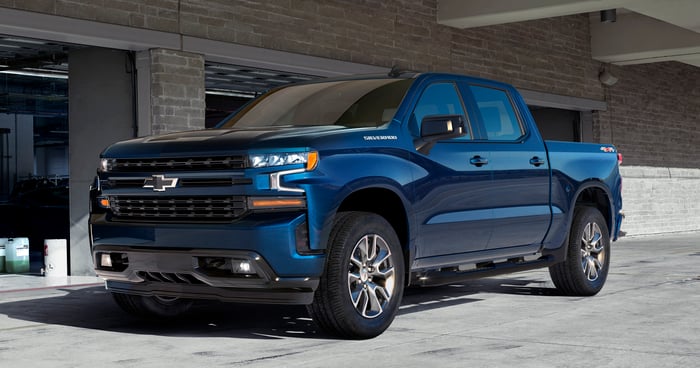 Data source: General Motors. Global deliveries include all vehicles delivered by GM's joint ventures with Chinese automakers and are rounded to the nearest thousand. "EBIT-adjusted" is GM's non-GAAP expression of earnings before interest and tax minus one-time items and with some other small adjustments. "Automotive operating cash flow" excludes results related to GM's captive-financing subsidiary.

What helped and hurt

Here are the key factors that drove (and mitigated) GM's 11.5% year-over-year decline in EBIT-adjusted.

How GM's business units performed in the first quarter

Note that all financial results in this section are presented on an EBIT-adjusted basis, except where noted.

North America: GM earned $1.9 billion in its home market in the first quarter, down from $2.2 billion a year ago. The impact of lower sales volumes was exacerbated by the SUV factory shutdown, offset somewhat by strong pricing on the company's new light-duty pickups and an ongoing cost-reduction effort.

GM's EBIT-adjusted margin in North America, a widely watched number, fell to 6.9% from 8% in the first quarter of 2018.

GM International: GM's catch-all overseas division earned just $31 million in the first quarter, down from $189 million a year ago. Incremental improvements driven by last year's restructuring in Korea and good pricing performance in Argentina were more than offset by exchange-rate movements and a sales slump in China.

Equity income from GM's joint ventures with Chinese automakers fell to $376 million in the quarter from $597 million a year ago. The company was able to use cost reductions to somewhat offset the effects of lower sales volumes and competitive pricing pressures.

GM Cruise: GM's self-driving subsidiary lost $169 million in the first quarter, versus a loss of $166 million in Q1 2018. Cruise isn't earning any money yet; it's working to get its technology ready for the launch of a self-driving taxi service. Asked about the timing of that launch during the earnings call, CEO Mary Barra emphasized that the service will launch when GM determines that Cruise's self-driving system is sufficiently advanced to be safe -- which may or may not happen by the end of 2019.

GM Financial: GM's captive-financing subsidiary generated $359 million in adjusted pre-tax earnings in the quarter, down from $443 million in the year-ago period. Good growth in the unit's portfolio was offset by higher interest costs and lower auction values for vehicles returned as leases ended.

GM had a net gain of $67 million from one-time items in the first quarter. A charge of $790 million for global restructuring (which the company terms "transformation activities") was more than offset by a tax gain of $857 million related to a favorable court judgment in Brazil.

As of March 31, 2019, GM had $15.8 billion in cash available to its core automaking business, down from $19.6 billion at year-end as the company spent cash ahead of new-product launches later this year. In addition to its cash, GM had $16.8 billion in lines of credit available to its automotive business, for total automotive liquidity of $32.6 billion.

Looking ahead: GM reiterated its 2019 guidance

CFO Dhivya Suryadevara reiterated the upbeat guidance that GM gave in January. For the full year, the company still expects its adjusted earnings per share to come in between $6.50 and $7.00, with adjusted automotive free cash flow of between $4.5 billion and $6.0 billion.

Suryadevara said that the first quarter would probably be GM's worst of the year from an earnings perspective, because of the SUV factory downtime and the continued ramp-up of production of the new pickups. She said that the company expects the second quarter to be better than the first, despite planned downtime at GM's heavy-duty pickup factory, and both the third and fourth quarters to be better than the second as production of new products hits full speed.