GM's production of pickups and big SUVs won't be affected by the semiconductor shortage, but the bottom line will be.

General Motors (GM 5.55%) reported a fourth-quarter profit that beat Wall Street's estimates, but said that an ongoing shortage of semiconductors could shave up to $2 billion from its profits in 2021.

GM's guidance for 2021 calls for an adjusted operating profit between $10 billion and $11 billion, taking into account the net impact of between $1.5 billion and $2 billion resulting from the worldwide chip shortage.

GM said on Tuesday that it will extend shutdowns at three of its North American assembly plants until at least mid-March, amid a shortage of chips that has hit auto production in factories around the world. The chip manufacturers have struggled to keep pace with a sharp rise in sales of personal computers amid the COVID-19 pandemic.

CEO Mary Barra said on Wednesday that GM is prioritizing production of its pickup trucks and big SUVs, profitable products that are in high demand. The company expects manufacturing of those products to remain on plan through the year, Barra said, and the supply disruptions won't have any impact on its future-product efforts.

On an adjusted basis, excluding one-time items, GM earned $1.93 per share in the fourth quarter on revenue of $37.5 billion. Both numbers exceeded the average estimates of Wall Street analysts polled by Thomson Reuters, which called for adjusted EPS of $1.63 on revenue of $26.12 billion.

GM's results were a significant improvement on the fourth quarter of 2019, which began amid a United Auto Workers strike that idled the company's U.S. factories. The improvement was driven by good results in North America, as sales of its newest products remained strong despite the pandemic.

GM's automotive business ended 2020 with $22.3 billion in cash and an additional $18.2 billion in available credit lines, for total liquidity of $40.5 billion. Against that, it had $17.5 billion in debt, and another $12.4 billion in underfunded pension liabilities.

The company said that it expects "no significant mandatory contributions" to its U.S. pension plans over the next five years. The plans were underfunded by $5.4 billion as of Dec. 31.

GM has repaid the full balance of the revolving account it drew down in the spring of 2020, when it idled most of its factories amid the first wave of the pandemic. In addition, it paid off about $800 million of unsecured debt in South America, it said.

The automaker had several small one-time items in the fourth quarter, including some small credits and charges related to overseas restructuring and buyouts of some Cadillac dealers that chose not to participate in the brand's transition to electric vehicles. The net impact was a credit of $5 million. 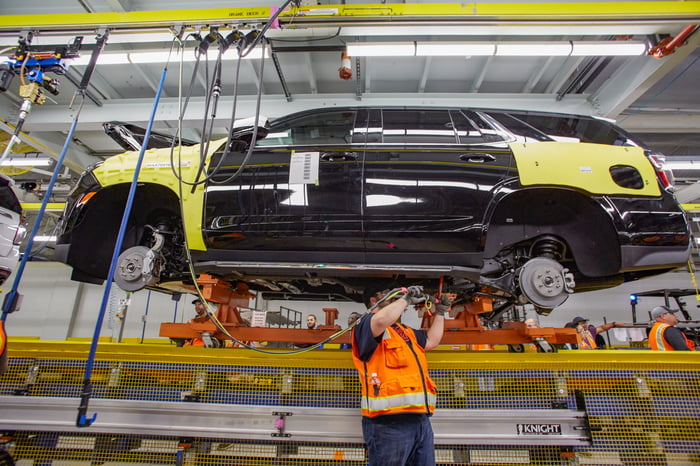 GM said that production of its big (and hugely profitable) SUVs will remain on track this year, despite a semiconductor shortage. Image source: General Motors.

For 2021, the company said that auto investors should expect: