It's a deal but not yet a done deal.

After more than four weeks on strike, the United Auto Workers union has a tentative deal with General Motors (GM -4.78%) on a new four-year labor agreement.

It's a deal, but it's not yet a done deal; some big hurdles remain. Here's a look at what comes next and at some of the implications for investors in GM and the other Detroit automakers.

What the UAW said

In a statement, the UAW said that its negotiators have reached a "Proposed Tentative Agreement" with GM that "represents major gains for UAW workers."

Neither the union nor GM, which confirmed the existence of the agreement, gave any details about its provisions. 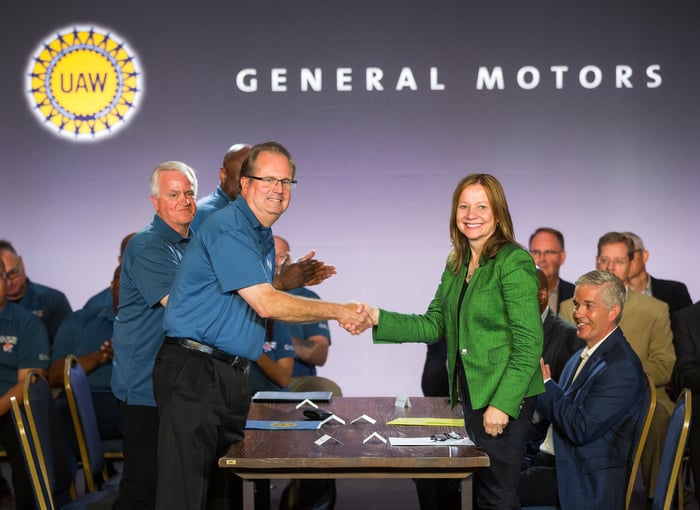 Under the UAW's rules, the so-called proposed tentative agreement has to pass two rounds of voting in order to become an agreement.

First, the UAW's leadership will present the deal to a council of union leaders from GM plants around the country. That group, called the UAW GM National Council, is set to meet on Thursday, Oct 17.

Has the strike ended?

Not yet. As of this writing, the UAW's leadership has told workers to remain on picket lines for the time being. The union said that it will update workers after the National Council meets on Thursday.

How long will this all take?

If all goes smoothly, it will take roughly two weeks to present the deal to workers and to collect and tally votes.

What if all doesn't go smoothly?

If either the National Council or the workers reject the deal, then GM and the UAW go back to the bargaining table. It's hard to say how much time that would add, but there would be intense pressure on both sides to get to a workable deal quickly.

What are the key issues?

In a nutshell, the UAW wants GM to offer temporary workers a path to full-time employment; a shorter path from entry-level wages to full wages for employees; commitments to build new products at GM's idled and underutilized U.S. factories; and no increase in worker healthcare costs.

GM, concerned about rising costs and its competitiveness, has reportedly resisted making concessions around wages and temporary workers.

We don't yet know what the proposed deal includes.

How does this affect Ford and FCA?

The union has been negotiating with Ford Motor Company (F -3.52%) and Fiat Chrysler Automobiles (FCAU) in separate sessions. The union is reportedly close to agreement with both Ford and FCA on everything but so-called economic issues, meaning workers' pay and benefits. Once a GM agreement is approved by workers, the UAW will push to get both Ford and FCA to agree to the same terms.

That might not be as simple as it sounds, as each of the automakers has different priorities and concerns. For example, Ford is said to be very concerned about rising healthcare costs. If GM agreed to keep workers' healthcare contributions at current (very low) levels, as has been reported, it's possible that Ford will object.

So is the proposed tentative agreement good news for investors?

It's promising news for investors in all three of the Detroit automakers, particularly GM. While GM hasn't revealed anything about the costs of the strike, the Center for Automotive Research estimates that it could be costing GM as much as $450 million per week. The Center notes that as time has passed and lost production has accumulated, the weekly costs of the strike have risen significantly.