Please ensure Javascript is enabled for purposes of website accessibility
Log In Help Join The Motley Fool
Free Article Join Over 1 Million Premium Members And Get More In-Depth Stock Guidance and Research
By John Rosevear - Updated Feb 9, 2021 at 8:43AM

General Motors (GM -5.96%) will report its fourth-quarter and full-year 2020 earnings before the market opens tomorrow, Feb. 10. What should we expect?

Both would be substantial improvements over GM's results in the fourth quarter of 2019, which began amid a strike that idled its plants in the United States. GM earned just $0.05 per share on revenue of $30.8 billion in that year-ago period.

How GM performed in the fourth quarter of 2020

The takeaway for investors: This was a very good quarter for GM in its two most important markets. 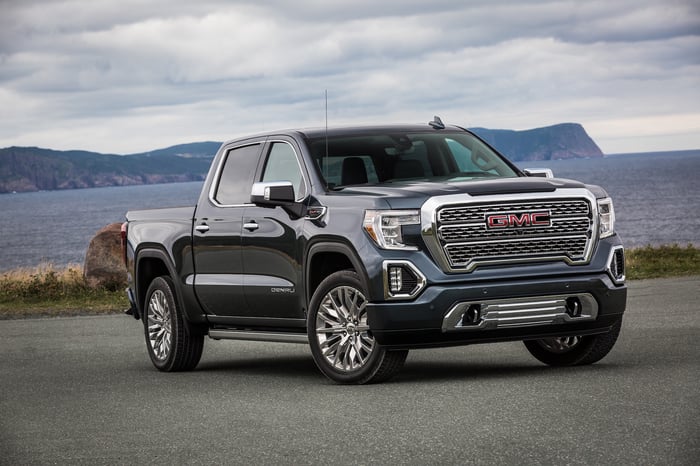 Sales of GM's new full-size pickups, the Chevrolet Silverado and GMC Sierra, were up a combined 11% from a year ago on strong retail demand. Image source: General Motors.

What GM told us to expect

GM didn't give us explicit guidance for the fourth quarter. But during GM's third-quarter earnings call, acting CFO John Stapleton said investors should expect the company's second-half adjusted earnings before interest and taxes ("EBIT-adjusted," in GM-speak) to fall between $8.5 billion and $9.5 billion, with adjusted automotive free cash flow between $11.5 billion and $12.5 billion. Stapleton also warned investors to expect GM's fourth-quarter result to come in below its third-quarter result, as additional costs related to new-product launches would weigh.

We can't translate that EBIT-adjusted range to adjusted earnings per share with great precision. But we can apply a back-of-envelope estimate: Call it $1.60 to $2.10, give or take.

What to expect when GM reports earnings

I think there are some good reasons for auto investors to expect GM to beat Wall Street's earnings-per-share estimate of $1.63, which seems a bit conservative given GM's strong sales results (and particularly strong sales of higher-profit products) in the U.S. and China in the quarter.

Yes, some costs will weigh -- GM is preparing to launch a slew of new electric vehicles, after all. But I think the stage is set for a nice upside earnings surprise when GM reports on Wednesday morning.