Please ensure Javascript is enabled for purposes of website accessibility
Log In Help Join The Motley Fool
Free Article Join Over 1 Million Premium Members And Get More In-Depth Stock Guidance and Research
By John Ballard - Jun 5, 2021 at 10:30AM

These stocks can outperform GameStop over the long term.

GameStop (GME -3.80%) has been in the spotlight after the share price soared to the stratosphere earlier this year. Normally, stocks make big moves when business is booming, but in this case, GameStop's surge had nothing to do with actual business performance. Instead, it was caused by a group of buyers that banded together to buy the stock, forcing a short squeeze that boosted the share price.

Many investors are wondering if they should buy shares of GameStop. Keep in mind, the video game retailer is facing tremendous competitive pressure from e-commerce giants and the shift to digital distribution of video games. In 2020, GameStop reported that comparable store sales fell 9.5%. This is not a stock I would want to risk my money on.

A smarter way to grow your money is to identify companies that are delivering robust growth in revenue and still have opportunities to keep growing. Tencent Holdings (TCEHY -0.03%) and Advanced Micro Devices (AMD -4.47%) are two stocks that have already delivered big gains for investors and are positioned to deliver more market-beating returns. 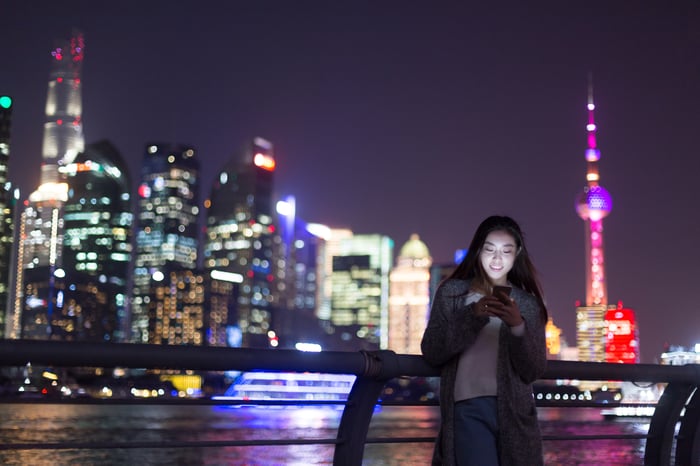 The Chinese tech giant has entered several fast-growing markets that should deliver market-beating returns to investors. Tencent operates the Weixin and WeChat social media platforms in China, with over 1.2 billion monthly active users. It's also the leading provider of video games in the world by revenue. In the first quarter, total revenue grew 25% year over year, consistent with the last several quarters, led by strong growth in social media and gaming.

Tencent saw faster growth from its fintech and business services, where revenue jumped 47% year over year in the first quarter. Management sees further growth opportunities in this segment. With respect to business services, the company is planning to invest behind the growing demand for enterprise software and cloud services.

It's also ramping up investment in big-budget games to pull in more players globally. Tencent's Riot Games launched Valorant last year, which is now one of the most popular titles globally.

Tencent's revenue and profits have more than tripled over the last four years. Likewise, the stock price has soared 235% over that time. The biggest risk here is the intense regulatory environment in China, but even with those regulatory risks, Tencent has rewarded investors with a massive return over the last decade, and with the growth opportunities still ahead, I would much rather own shares of Tencent than GameStop. 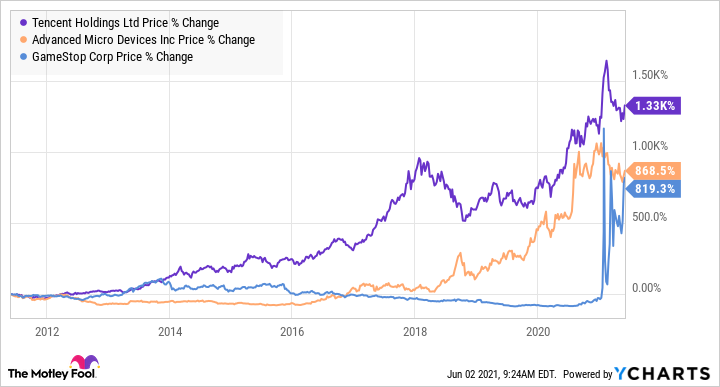 AMD entered the year with its strongest-ever product lineup across consumer PC processors, enterprise server chips, and gaming chips, and the latest financial results didn't disappoint. Revenue nearly doubled year over year to $3.4 billion in the first quarter, with earnings per share more than tripling to $0.45. It was a strong quarter for PC sales and game consoles, which was great news for AMD, since it supplies custom processors for Sony's PlayStation 5 and Microsoft's Xbox Series X/S, which launched last year.

Part of the strong growth had to do with lower PC sales in the year-ago quarter at the start of the pandemic. But the current chip shortage across the semiconductor industry means demand for AMD's processors should remain healthy through 2021. Most importantly, AMD believes it is gaining market share against Intel in the CPU market.

During the Q1 earnings call, AMD called out several key areas that point to more growth in the near term. Management expects continued demand for notebooks powered by its Ryzen Mobile 5000 series processors. It also expects the ramp up in production of its next-generation Instinct GPU for data centers to drive revenue growth in the second half of the year.

Both Tencent and AMD are trading nearly 20% off their 52-week high, which could make this a good opportunity to add these growth tech stocks to your investment portfolio.