Please ensure Javascript is enabled for purposes of website accessibility
Log In Help Join The Motley Fool
Free Article Join Over 1 Million Premium Members And Get More In-Depth Stock Guidance and Research
By Billy Duberstein - May 23, 2021 at 10:00AM

Tencent is investing more of its profits this year into big growth opportunities.

Shares of Chinese internet giant Tencent (TCEHY -1.52%) traded down after it reported its first-quarter numbers last week. Although results were strong, with revenue up 25% and net profit up 22% by non-International Financial Reporting Standards, investors wary of China's recent anti-monopoly crackdown probably needed a bigger beat to assuage those fears.

In addition, Tencent's management forecast heavy stepped-up spending this year, which means the company's margins will edge down and profit growth will be somewhere between zero and that 22% seen last quarter, according to management.

However, instead of fearing this scenario for the highly profitable Tencent, shareholders should be celebrating the news. 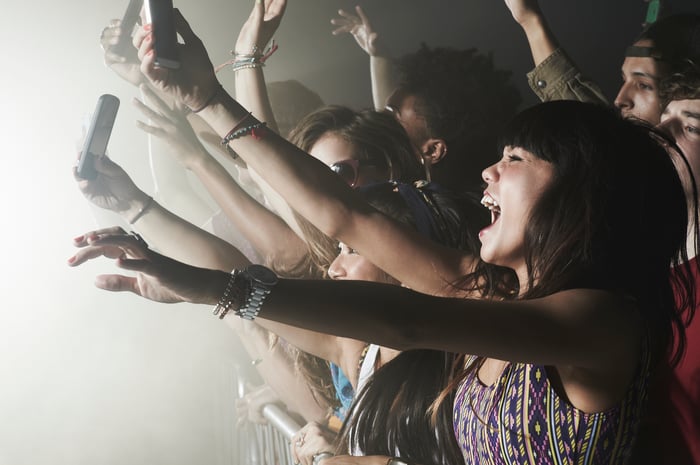 Tencent has the world's largest video game empire, its 1.242 billion-user WeChat social media platform is the largest in China, and it's also the owner of the largest Chinese video and music streaming platforms. Tencent is also one of the two major digital-payment and cloud platforms in the country, neck-and-neck with Alibaba (NYSE: BABA). It's already so large, that some may think it may be hard to keep up top-line growth.

However, that view may be short-sighted. China's rising middle class creates a formidable tailwind, and Tencent's deliberate approach to monetization has allowed it to keep up consistent strong growth for a sustained period.

As we look into the future, we see expanding opportunities in the various verticals in which we operate, enabled by technology innovation and increasing acceptance of digital solutions among users and businesses. As a result, we are stepping up our investment in areas including business services and enterprise software, high-production-value games, and short-form video. In addition, as a technology company serving a broad base of users and enterprises, we recognize our social responsibility and the opportunities to create significant social value through innovations. We believe that our recent strategic upgrade and establishment of a Sustainable Social Value Organization will allow us to make an even more positive impact to the society, and usher in a new phase of development for Tencent.

That's a lot of expense Tencent is undertaking, with uncertain or negligible immediate payoff, so it's not a surprise to see some investors selling the stock. However, long-term investors in Tencent know that the stepped-up investment isn't a big reason to worry. Quite the opposite.

On cloud services, it shouldn't be a surprise that Tencent is spending big. The market for cloud infrastructure, platforms, and software-as-a-service is huge, and early movers with leading services are likely to win big in the future as they box out would-be competitors. There are high barriers to entry on the cloud, which is capital and technology-intensive, and Tencent will have to contend with its big main rival, Alibaba, in that race. With the pandemic having accelerated digital enterprise trends, it's no surprise to see cloud leaders spending to capitalize on the opportunity.

Second, as the industry leader, Tencent has keen insights into the trends affecting all different segments of the massive $150 billion video gaming market. On the conference call with analysts, President Martin Lau said:

[T]he resources required to capture the opportunities are larger than ever. First, mobile devices are extending the total addressable market for games, which was further boosted by the stay-at-home period. We believe emerging genres and development with developers will further expand the market. Second, game players are becoming more discerning and quality sensitive. High-production value, innovative, and cross-platform games can attract and retain large audiences to an extent not previously possible. Thirdly, Chinese game developers are attaining early success in global markets. We believe we're already in the early stages of capitalizing on these trends.

Finally, on short-form video, everyone knows Tencent is up against stiff competition versus first-mover ByteDance, the parent company of TikTok, or "Douyin" as they call it in China. On this front, Tencent is integrating its Weishi short-form platform with it subscription-based Tencent Video, to help hone its algorithms. That should help improve targeting and content recommendations across both platforms.

Tencent is also creating a new video infrastructure within WeChat, while also investing in tools for content creators to make high-quality videos. Rather than a focus on entertainment, management says it is looking to promote higher-quality, differentiated, and "nutritious" instructional short videos rather than just the short-form entertainment associated with TikTok.

Why investors should have faith

Investors should be skeptical when any company steps up spending amid heightened competition, but Tencent has earned the benefit of the doubt. The company has built itself into the largest company in China through smart investments, targeting the right markets, and doing right by customers for decades. It's also why Tencent has largely managed to avoid some of government fines and punishments directed at other rivals.

Even the social-responsibility initiatives may not pay off in the near term, but management correctly sees the bigger picture. Stepped-up social investment should help cement Tencent's brand for a new generation of customers and investors concerned about environmental, social, and corporate governance, and it should keep it in the good graces of the government -- an important task these days. Lau elaborated:

You don't really sort of, you know, every step of your way calculate what is the individual gain in some of the movement that you make. So I think, you know, that's sort of, you know, our overall belief when you build up an organization, if you do the right things, good things will happen. On a more granular basis, I would say, you know, if we actually sort of leverage our technology and leverage our products to deliver bigger social good, I think, you know, overall, we'll be better received by our users, or by our customers, by the government, and by our employees.

Who knows how much Tencent's social responsibility donations will save it in future government fines or overregulation? Or how many customers might choose Tencent's short-video platform or cloud over the competition, thanks to these initiatives? Or if a gifted software engineer chooses Tencent over others, thanks to this corporate culture?

This sort of qualitative investment in Tencent's brand, along with the philosophy of doing right by all stakeholders, sometimes at the expense of short-term profits, should be music to the ears of Foolish long-term investors.

I've chosen to invest in Tencent through its largest shareholder, but Tencent's stock itself also looks attractive on its own today after the sell-off. It remains the best-run company in China in my eyes, which makes it a contender for best in the world.