Find out what these companies are doing right.

Many stocks have seen huge gains on no news at all, as short-term traders focus on tactics like short squeezes to send shares of unlikely stocks into the stratosphere. However, some stocks have actual fundamental reasons for gains, and that helped Fastly (FSLY 4.89%) overcome a big challenge and J.Jill (JILL 1.59%) and Chico's FAS (CHS 2.02%) post gains after earnings.

Fastly deals with an outage

Shares of Fastly climbed more than 5%. The stock's gain was somewhat surprising, given that the provider of edge computing services went through a brief interruption in its services, adding to some of the challenges the company has faced in recent months.

Reports from around the world of websites that were down showed just how critical Fastly's internet-enhancing services have become. News sites like CNN and The Guardian, some community discussion and social media services, and even government websites reported outages. Fastly quickly responded with a fix to remedy the situation, but many users are still concerned that problems might persist or new issues could come up.

Fastly has gotten punished along with many other high-growth stocks in 2021. Of course, some of that is reasonable, given the stellar performance that the edge computing specialist had in 2020. Yet the declines have also pushed Fastly and other growth stocks low enough to entice some bargain-seeking investors to consider buying shares.

The fact that Fastly's stock rebounded so quickly shows that people rely on its services too much to discard, even after a major event. That bodes well for the company, as well as investors looking at the stock. 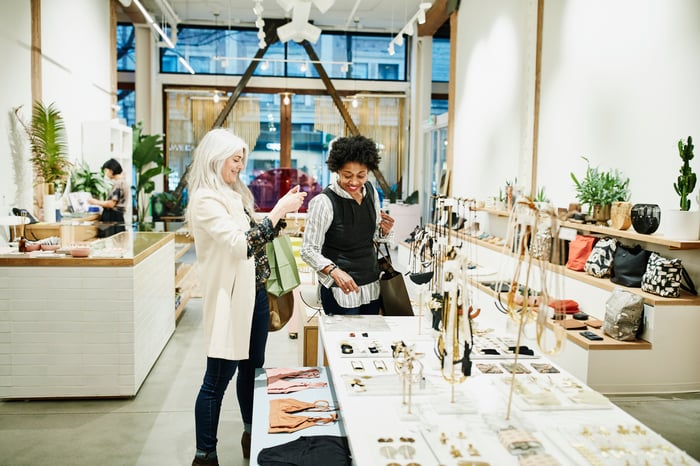 Elsewhere, a couple of retail stocks climbed after announcing positive earnings. J.Jill climbed more than 4%, while Chico's almost managed to reach the 4% mark, as well.

J.Jill rebounded nicely from the pandemic-affected period a year ago. Sales climbed 42% in the first quarter, compared to year-earlier levels, with direct-to-consumer sales rising at a 33% pace. That shows customers are returning to stores, and J.Jill managed to reverse a year-ago loss with adjusted earnings of $0.20 per share. Even though the retailer chose not to issue guidance for the future, shareholders seemed relieved to see J.Jill make progress toward a full reopening.

Meanwhile, Chico's saw similar gains. Revenue overall jumped 38%, including a 65% rise at the company's Soma store concept. The retailer reported that a new emphasis on quality and higher styling values have shoppers excited about its product lineup, and it's also upbeat about its future. Although it declined to issue full guidance, Chico's believes that sales should rise 28% to 34% in fiscal 2021, with greatly improved profitability metrics, compared to 2020.

Retailers were among the hardest-hit stocks during the early stages of the pandemic, so it's not surprising to see them start to recover as the economy reopens. To get back to pre-pandemic levels, though, both J.Jill and Chico's will have to build more forward momentum and keep demonstrating their comeback potential.

Why Wednesday's Stock Market Drop Might Be Just the Beginning