Please ensure Javascript is enabled for purposes of website accessibility
Log In Help Join The Motley Fool
Free Article Join Over 1 Million Premium Members And Get More In-Depth Stock Guidance and Research
By James Brumley - Jun 8, 2021 at 8:45AM

The retailer's new home-grown streaming TV stick is just the latest entry on a list of products that are disruptive, including to the company's suppliers.

If there were any doubts that Walmart (WMT 1.85%) was serious about cultivating its own consumer electronics brand name, those doubts were just wiped away.

The world's biggest brick-and-mortar retailer recently -- and perhaps inadvertently -- unveiled an Android-powered 4K-capable streaming stick sold under its "onn" label. It comes in two models, with the 1080p-capable version costing just under $25, while the UHD/4K Android-powered device selling for $30. Both go on sale this week.

With just a passing glance, these new products are not a remarkable development. But take a step back and look at the bigger picture. This is the fourth major consumer electronics product using Walmart's onn label to make its way to store shelves just since 2019, in addition to several dozen onn-branded electronics accessories. More than that, the new streaming-TV dongles fire a shot right across the bow of yet another Walmart supplier of nearly identical goods.

No rival retailer or consumer electronics company can ignore this brewing competition any longer. 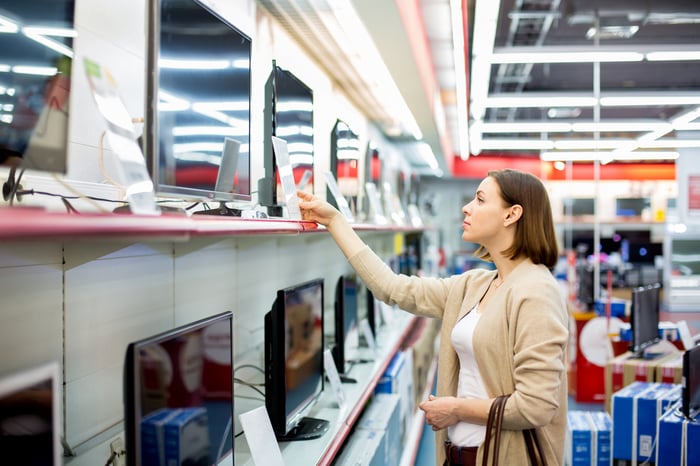 The onn portfolio continues to grow

The new streaming sticks in question take dead aim at Roku (ROKU 3.92%), which sells similar streaming sticks at prices $5 to $10 higher than Walmart's latest entry in its private-label consumer electronics lineup. Alphabet's (GOOG 2.36%) (GOOGL 2.39%) ChromeCast devices, as well as Fire TV sticks from Amazon (AMZN 2.07%), will also have to justify their higher price compared to the lower-cost alternative.

Were it just this streaming-television hardware, no big deal. But it's not just this device. Walmart introduced onn-branded tablets in early 2019, added onn televisions to its inventory later that year, and now sells a variety of onn goods ranging from keyboards to SD cards to speakers to printer cartridges, and more. The addition of streaming television simply rounds out the portfolio.

Reading between the lines, Walmart is serious about building out this home-grown brand. And well it should be.

A trillion-dollar market at stake

Estimates vary somewhat from one source to the next, but most researchers agree that worldwide annual spending on personal electronics currently clocks in at around $1 trillion per year. Steady single-digit percentage growth should pump that figure up to something on the order of $1.5 trillion within the next few years. Clearly, there's lots of revenue at stake.

Walmart's got more at stake than its rival retailers, however.

It comes as no surprise to learn that Amazon enjoys a greater share of the U.S. (and the world, for that matter) e-commerce market than Walmart does; Amazon is essentially an online-only retailer. What is a bit surprising, however, is that even though Walmart ultimately generates more retail sales than Amazon, eMarketer estimates that Amazon is responsible for slightly more than half the United States' total online sales for computers and consumer electronics. E-commerce data repository e-commerceDB pegs Walmart's share of the country's online consumer electronics market at a much more modest 13%. 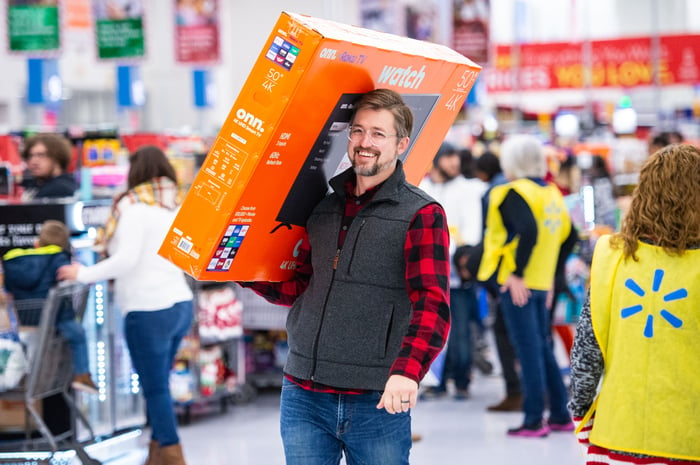 Things are even less encouraging when adding brick-and-mortar sales back into the mix. PYMNTS.com reckons that between 2014 and 2018 -- the year before Walmart launched its onn private-label line -- the retailer's overall share of the U.S. electronics market slipped from more than 9% to 6.6%.

Given this trend, Walmart's home-grown foray into the business makes sense.

Amazon need not sweat just yet. Reselling wares manufactured by an established brand name is one thing. Building up a new brand name is another, particularly in a highly competitive market like electronics. Amazon also has the advantage of being a well-established source for consumer electronics.

Apple (AAPL 2.14%) need not worry, either. There's always a market for premium products like the iPad. It's unlikely anyone ready to spend several hundred dollars for such a top-end tablet would be impressed by a similarly sized onn tablet priced at less than $100. Walmart's house brand is clearly aiming at the value end of the pricing spectrum.

It's a market, however, where Walmart has little to lose and lots to gain, not just at Amazon's expense, but also at the expense of Panasonic and Samsung. Both make television sets no longer just sold at Walmart, but now competing with Walmart's own TV brands. Ditto for Roku's streaming sticks, as well as Alphabet's ChromeCasts. At the very least, the onn brand is becoming disruptive. In a few years, it could be a legitimate profit center. Both bolster the already-firm bullish case for Walmart.