Please ensure Javascript is enabled for purposes of website accessibility
Log In Help Join The Motley Fool
Free Article Join Over 1 Million Premium Members And Get More In-Depth Stock Guidance and Research
By Billy Duberstein – Updated Jun 9, 2021 at 10:17AM

While newer coins may garner lots of headlines, don't ignore the original cryptocurrency, which is becoming widely adopted by institutions.

The cryptocurrency space has been abuzz in recent months, with prices spiking to begin the year and then dropping sharply, new coins consistently coming to market, and heightened speculation about digital currencies potentially replacing traditional banking services and card networks.

While cryptocurrencies present interesting opportunities and potentially huge upside, there are also big risks. Cryptocurrencies could become a new kind of financial platform and an alternative to fiat currencies, but unlike stocks of businesses, cryptos don't produce anything. So while a stock's intrinsic value can be thought of as the present value of all future cash flows, any sort of intrinsic value for cryptocurrency is more nebulous; it will basically be worth what the supply and demand in the market dictates that it's worth -- which could be a lot, or nothing.

For all those reasons, if you are willing to take the plunge into cryptocurrencies, don't bet any more than you can afford to lose. But if you're going to speculate, one coin should definitely be at the top of your buy list. 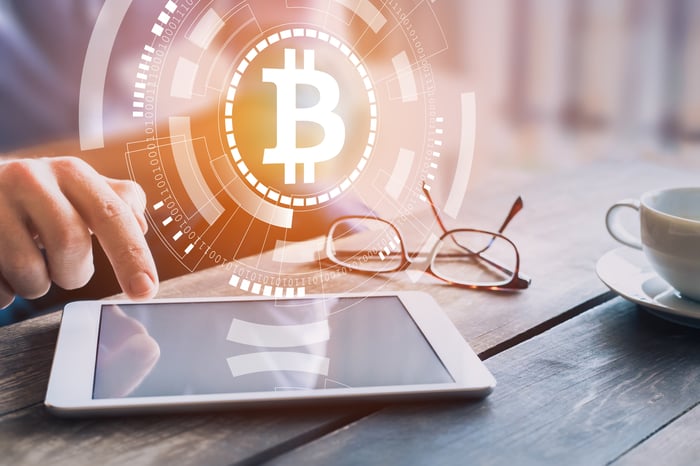 Bitcoin: the OG cryptocurrency is still the safest bet

Since cryptocurrencies are relatively new, a basket approach may be best, but I definitely think the first and largest holding in any crypto basket should be Bitcoin (BTC 822.93%).

Why bitcoin? For the same reason Amazon.com became a dominant internet company, while many other potential competitors fell by the wayside: Bitcoin is a first-mover.

A first-mover has a tremendous competitive advantage in any industry in which there are powerful network effects. A network effect is when a platform becomes more valuable as more people use it. Think of the leading social networks, or Amazon's e-commerce marketplace: Sellers want to go where the buyers are; buyers want access to the site with the best selection and lower prices. By getting an early lead, Amazon has become a dominant force in e-commerce. Facebook continues to dominate social media in a similar way because of this first-mover status and terrific execution.

If cryptocurrencies are going to be worth anything in the future, it will take a critical mass of people and institutions believing a certain crypto platform has worth, either as a medium of exchange or as store of value.

In this regard, bitcoin is far, far out in front of other coins.

Companies, banks, and even governments are buying into Bitcoin

Bitcoin greatly increased in value in the beginning of this year, as a critical mass of companies, governments, and institutional investors began to allocate a significant amount of capital to bitcoin. Fintech firm Square (SQ -3.79%) bought some bitcoin back in October 2020 and again in February. Tesla bought bitcoin with its own corporate cash back in February to much media buzz, and it initially said it would accept bitcoin payments, only to reverse course in May because of bitcoin's energy footprint. Perhaps the biggest bitcoin enthusiast among corporations is MicroStrategy, which not only began buying bitcoin last August, but has borrowed hundreds of millions in high-yield debt to buy even more, just in recent days.

Also in the first quarter, large U.S. bank Morgan Stanley became the first large U.S. bank to allow access to funds that trade bitcoin.  Last month, Goldman Sachs published a paper officially naming bitcoin as an investable asset class, reversing its prior position, while also setting up a cryptocurrency trading desk. Even BNY Mellon, the nation's oldest bank, said it would begin financing bitcoin and other digital currencies some time this year.

Finally, at a conference this past weekend, President Nayib Bukele of El Salvador said he would be introducing a bill to the country's legislature to make bitcoin a legal tender in El Salvador, which would make El Salvador the first country to take that step. Bukele also said the country was partnering with Strike, a crypto digital-wallet company, to build the company's digital currency infrastructure.

Needless to say, bitcoin appears to be the first digital asset that these institutions are recognizing as a viable asset or currency. While there could be more cryptocurrencies that make it to this level of adoption, it's clear bitcoin has a pretty big early lead.

Jack Dorsey is all in on bitcoin

Speaking of Square, its founder and CEO, Jack Dorsey, is a dedicated bitcoin evangelist, to the exclusion of other digital currencies. Just this month, Dorsey said Square was considering making a hardware bitcoin wallet, and that if he thought the bitcoin ecosystem needed him, Dorsey would leave Square and Twitter to work on bitcoin.

The wind is at bitcoin's back

While many investors and commentators like to highlight some of the innovative properties of new types of coins, bitcoin's architecture is fairly innovative, too, and also has a robust developer community around it. For instance, bitcoin developers recently developed Sovryn, a decentralized finance (DeFi) application based on the bitcoin side chain RSK. DeFi had been thought by many to be the exclusive realm of bitcoin competitor Ethereum (ETH 191.70%), but the bitcoin blockchain ecosystem appears to be flexible enough to also house DeFi applications as well.

With a flexible platform, a big first-mover advantage, and a critical mass of institutions and entrepreneurs like Dorsey getting exclusively behind it, bitcoin should definitely be the novice's first crypto purchase, and it should probably be the largest allocation among any crypto "basket" you're looking to purchase.

Why Bitcoin, Marathon Digital, and Hut 8 Mining Are Rising Today