Please ensure Javascript is enabled for purposes of website accessibility
Log In Help Join The Motley Fool
Free Article Join Over 1 Million Premium Members And Get More In-Depth Stock Guidance and Research
By Jim Halley – Jun 15, 2021 at 8:32AM

With safety concerns allayed, the company is ready to restart clinical trials of key therapies.

Pioneering biotech bluebird bio (BLUE -8.19%) has resumed clinical trials for its blood disorder gene therapies after getting clearance from the U.S. Food and Drug Administration (FDA). The stock is up more than 10% over the past five days in response, and the FDA's move bodes well for other gene therapy companies.

In February, two patients in separate studies using the company's lentiviral vector (a type of gene-therapy delivery system) came down with suspected cases of blood cancer. After further review, bluebird bio said that multiple independent analyses found it was unlikely either diagnosis was linked to the company's BB305 lentiviral. The FDA, after looking at the company's analysis, agreed, and last week the agency lifted the embargo on the trials.

This means that bluebird can go back to selling Zynteglo (a therapy to fight blood disorder transfusion-dependent beta-thalassemia (TDT)) in Europe, where it already has European Medicines Agency approval, which makes it more likely the drug will be approved in the United States. It also means that the company's phase 3 trials of LentiGlobin to fight sickle cell disease (SCD) and elivadogen autotemcel to fight cerebral adrenoleukodystrophy (ALD, a genetic condition where the myelin sheath that covers nerve cells in the brain is damaged, causing behavioral and neurological symptoms), can continue as well. 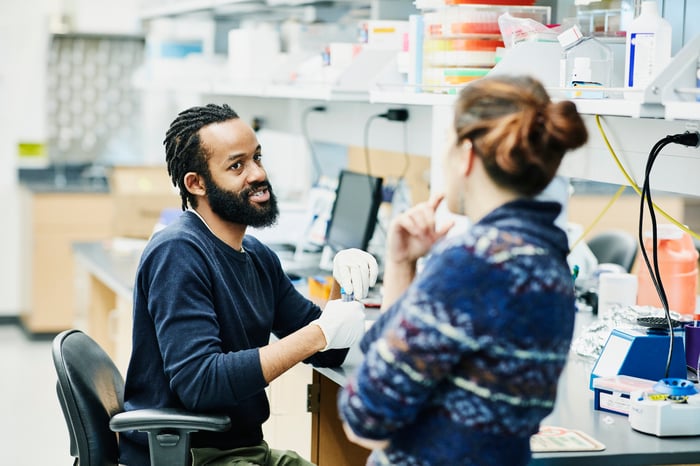 Lifting a cloud from bluebird

The company has big plans for Zynteglo, LentiGlobin, and elivadogen autotemcel because they have the potential to cure, not just treat, lifelong diseases. If the drugs can be found to be safe as well, it could be a huge deal.

The Centers for Disease Control and Prevention (CDC) estimates that 90,000 to 100,000 Americans have SCD, which causes misshapen red blood cells that die early. This can cause strokes and lead to infections. TDT is much rarer, affecting roughly 1,000 people in the United States.  The blood disorder is characterized by severe anemia requiring lifelong regular blood transfusions to maintain healthy levels of hemoglobin, a protein in red blood cells that carries oxygen from the lungs to the body's cells and returns carbon dioxide to the lungs. ALD is also rare, affecting one in 21,000 males born in the United States.

Adding in another wrinkle

Investors looking at bluebird bio must factor in a major complication. Management has stated that they plan to split the company into two by the end of the year, with one company, BLUE SGD, being focused on the company's severe genetic disease therapies and the other, BLUE ONCO, concerned with its oncology portfolio. The point is to streamline each company to make it more efficient. Not knowing how the stock split will work for investors does make it harder to invest. Of the two resulting companies, I see more short-term benefit in BLUE SGD because it could have as many as three new therapies hitting the market this year.

What this means for other gene-editing companies

The FDA's decision to allow the clinical tests to proceed is good news not just for bluebird, but for other companies that produce lentiviral vectors (such as ThermoFisher Scientific or Lentigen Technology)  and companies that use them to deliver gene-altering therapies (such as Novartis and Bristol Myers Squibb). The lentiviral vector is derived from the RNA retrovirus of HIV-1. It is handy as a gene transfer method because of its ability to infect nondividing cells as well as dividing cells. Simply put, it uses the evolutionary advantages that viruses have to infect cells and then sends genetic payloads into the cells' gene expressions.

One of the main concerns about lentiviral vectors, however, is off-target results. In several studies, researchers have found an increased risk of leukemia in patients who received gene therapy using lentiviral vectors.

The FDA's recent decision to allow the clinical tests should allay some of those concerns. If anything holds back gene editing therapies over the long run, it'll likely be their high cost -- both to develop, and consequentially, to the consumer. One estimate puts the typical development of a gene therapy at $5 billion, and those costs are passed on to consumers. An extreme example is Novartis' Zolgensma, an approved gene therapy designed to treat spinal muscular atrophy. At $2.1 million per treatment course, it's the most expensive therapy in the world.

The hope is that insurance companies will look favorably on the long-term savings of potentially curative therapies compared to the costs of patients who may need lifelong blood transfusions or other medical procedures.

Looking long-term at bluebird and others

bluebird bio is still a clinical-stage biotech company with little revenue and certainly no profits, so investing in it brings a great deal of risk.

However, the potential for the company, particularly with several phase 3 trials in place, offers a nice reward should any of the therapies pan out. There is a lot we still don't know about the safety of gene editing, but the $920 million Novartis made from Zolgensma last year, an improvement of 155% year over year, is a blueprint for bluebird and others going forward, showing that gene editing can bring high-level returns.

These 2 Stocks Carry a Lot of Risk, but Their Upside Is Huge