Please ensure Javascript is enabled for purposes of website accessibility
Log In Help Join The Motley Fool
Free Article Join Over 1 Million Premium Members And Get More In-Depth Stock Guidance and Research
By Travis Hoium - Jun 15, 2021 at 9:46AM

These shares aren't for the faint of heart.

The space industry is a high-potential, high-risk investment opportunity for investors willing to take the leap into some volatility. In the last year alone, the stock of Virgin Galactic Holdings (SPCE -0.56%) has jumped 300%, then fallen 75%, and more than doubled from recent lows. Investors who have held on for the ride have done well, but it hasn't been easy.

More than even the highest flying growth stocks on the market, this is a boom-and-bust kind of investment right now. If Virgin Galactic succeeds, it could reshape the way we think about space. But if it fails, the company could end in disaster. Right now, I think it's worth the risk. 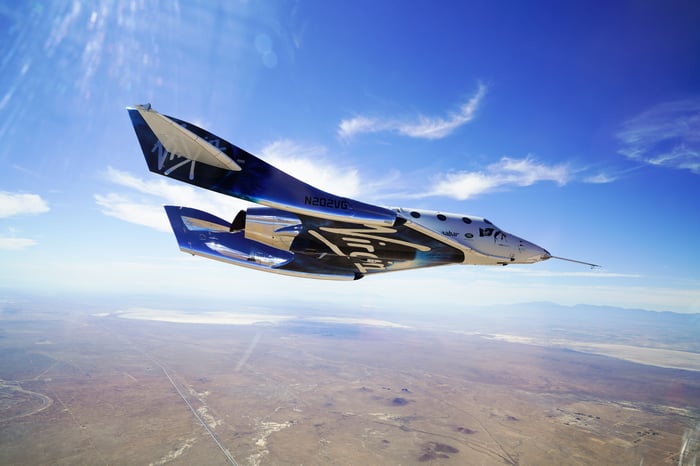 Before we get too far into Virgin Galactic's opportunities, it's important to point out that this is a pre-revenue company. It is burning cash in anticipation of generating revenue from research and from customer tickets for a quick trip into space, but it hasn't launched commercially yet. 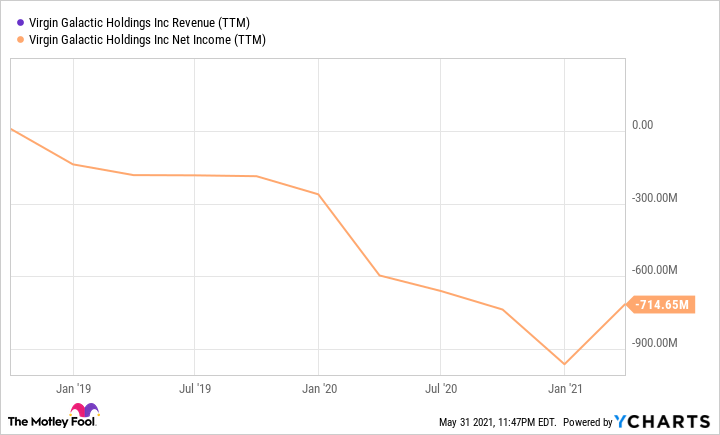 Being a pre-revenue company isn't bad, but it shows just how early it is in its development.

Building a new market in space

The bullish case for Virgin Galactic is that it'll redefine how we think about space. For as little as $250,000, anyone can travel into space once commercial flights begin. That sounds like a lot of money, but think about how unattainable space seemed only a decade or two ago. Now, it just takes a big checkbook to get there. The flight is only a few minutes long, but it's a once-in-a-lifetime experience that has already attracted over 600 reservations.

Management thinks that when operations are fully ramped up, a spaceport like the company has built in New Mexico will be able to generate $1 billion per year in revenue. Build a few spaceports around the world, and suddenly valuing the company at $8.7 billion (its market capitalization today) doesn't seem so crazy.

High-speed travel is next

In development is a Mach 3 aircraft that could take high-speed travel to a new level. While the current spacecraft being tested is meant for tourism, a Mach 3 aircraft could make global travel more efficient, reducing the flight from Los Angeles to Tokyo from 12 hours to three to four hours. And with a capacity of 9 to 19 seats, it would seem more like a flight on a private jet than the failed Concorde, which had a capacity of 92 to 128 passengers.

We don't know if space tourism or mach-speed travel will succeed but imagine if they do. If thousands of people fly into space each year and it's commonplace to see videos of celebrities or wealthy people in a weightless atmosphere, it has the potential to shape how we view space tourism. At the same time, Virgin Galactic's design of reusable rockets could allow it to reduce costs to make space tourism possible to those willing to spend around $100,000 on a ticket. And that could truly change how we view space. That's the kind of disruption that would drive big gains for investors.

Virgin Galactic is a buy, with risks

The investment thesis for Virgin Galactic is pretty simple: Virgin Galactic could disrupt the way we think about visiting space and Mach-speed travel. Management thinks it can complete 400 space flights per year, generating $1 billion in revenue per spaceport, with the potential to build dozens of spaceports around the world. Long-term, the spaceports could also house mach-speed aircraft. If Virgin Galactic succeeds, the company could open up multibillion-dollar markets that don't exist today.

As big as the opportunity is, the risks are hefty as well. A failure in testing or product development could sink the company. Today, I think the reward outweighs the risk, and a decade or two from now we'll all know of someone who has visited space. That potential shift in how we think about the universe around us makes this a company I'm excited to own, and follow, into the future.