Please ensure Javascript is enabled for purposes of website accessibility
Log In Help Join The Motley Fool
Free Article Join Over 1 Million Premium Members And Get More In-Depth Stock Guidance and Research
By Bram Berkowitz – Jun 16, 2021 at 6:29AM

In recent weeks, overdraft fees have been under scrutiny and analysts believe banks are going to face more pressure going forward.

Bank overdraft fees have been coming under increasing criticism from politicians and other organizations, who say penalizing users for not having enough money in their accounts overwhelmingly hurts a more financially vulnerable population. Recently, Ally Bank announced that it plans to get rid of overdraft fees, becoming the first major bank to end the practice.

With more pressure expected on the industry, now is a good time for investors to take a look and see how much overdraft fees contribute to the top and bottom lines of major banks. 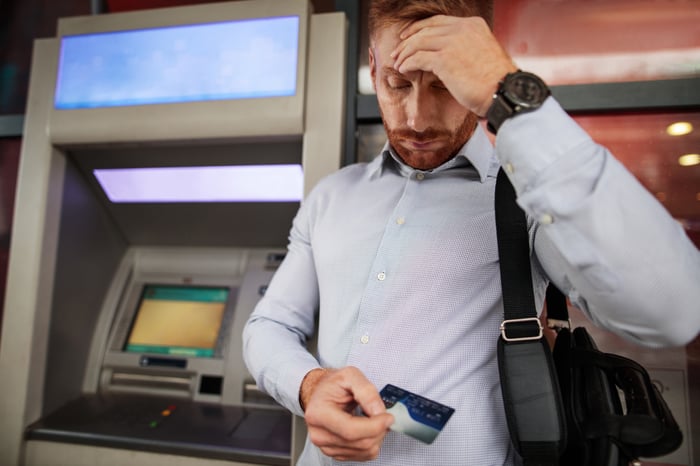 Significance of overdraft fees to profit and revenue

Customers incur overdraft fees when they make transactions that exceed the amount of money in their accounts and the bank has to cover the difference. This is a subtle distinction from insufficient funds fees, which are charged when a customer's check or electronic transaction is rejected. For the sake of simplicity, some people say "overdraft fees" to refer to both, and this article will too.

Clearly, overdraft fees are not a large part of total revenue at the largest U.S. banks. JPMorgan Chase collected the most overdraft fees of the four large banks in 2020, and overdraft fees still only made up 1.2% of its total revenue. JPMorgan also has been making more revenue from its fee-based businesses than its lending businesses in recent years, so I am sure that when the practice of overdraft fees eventually goes away, the bank will not feel too much of an impact from the lost revenue.

Not meaningless, but not significant

Overdraft fees clearly result in some noticeable revenue when you consider that a small percentage of tens of billions of dollars is still a lot of money. But clearly for the four large U.S. banks, they are not significant enough to make or break an investment decision. Even in some of these regional banks, while I don't love seeing overdraft fees make up 5% of total revenue, overdraft fees do not constitute good revenue. Banking is a relationship business, so when banks are charging their customers fees, it's likely going to hurt the relationship with that customer and put future business at risk. If losing 5% of bad revenue can make or break an investment decision, then it probably wasn't a very good investment in the first place.

That said, when investing in bank stocks, be mindful of how much revenue is coming from overdraft fees. There are some smaller banks where overdraft fees are a bigger percentage of revenue than even 5%, which does start to get hard to ignore -- especially if the practice comes to an end sometime in the not-too-distant future.