Please ensure Javascript is enabled for purposes of website accessibility
Log In Help Join The Motley Fool
Free Article Join Over 1 Million Premium Members And Get More In-Depth Stock Guidance and Research
By Bram Berkowitz – Jun 11, 2020 at 7:00AM

The Center for Responsible Lending found that large U.S. banks collected the bulk of total overdraft-related fee income in 2019.

This report is important because it shows the extent to which overdrafts and NSF fees affect banks' bottom lines. Now that there is some political momentum to get rid of this income stream, which bank stocks would be most heavily affected if legislation changed their ability to collect it? 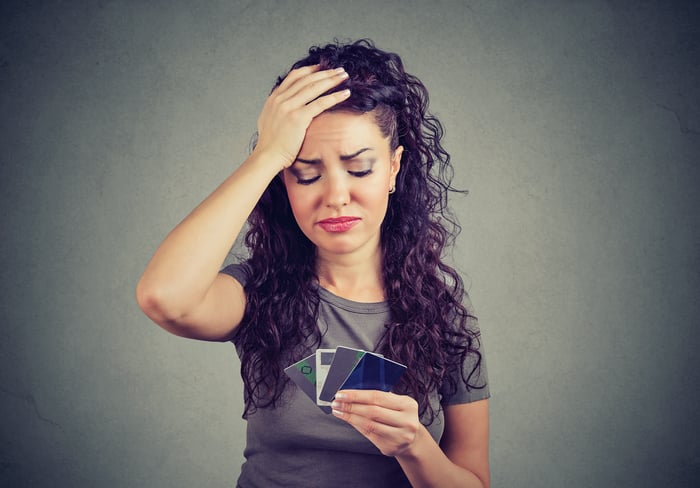 Effect on the bottom line

For the top 20 fee-charging banks in the U.S., including many of the largest banks in the country, overdrafts and NSF fee income in 2019 collectively made up a little bit less than 2% of total income, according to the report. So it's not a a huge source, but it's not exactly nothing, either, when you consider that we are talking about billions of dollars.

One thing I will point out about the data is that it doesn't include these banks' holding companies -- just the bank subsidiary. For instance, the report lists Citibank, the consumer division of Citigroup. Citibank has $1.45 trillion of the $2.2 trillion in assets currently controlled by Citigroup. This makes a certain amount of sense, considering these overdraft-related fees are likely to only be found in the consumer bank division of a company, and not in, say, the investment bank division.

But even though overdraft-related fees only make up a small percentage of total income, they collectively make up close to 6% of all non-interest income at the 20 largest banks. This is somewhat significant because the Fed's benchmark lending rate, near zero, makes it more difficult to generate income from loans, and since low rates do not appear to be going anywhere soon, non-interest income is likely going to be very valuable for the foreseeable future.

The CRL cited several attempts by lawmakers to eliminate overdraft fees. In late March, as the coronavirus pandemic threw the economy into turmoil, U.S. Sens. Cory Booker (D-N.J.) and Sherrod Brown (D-Ohio) filed a bill to temporarily eliminate overdraft fees until the coronavirus pandemic subsided. Prior to that, in August 2018, the two senators introduced legislation to permanently get rid of overdraft fees on debit card transactions and ATM withdrawals, among other related provisions.

And according to the CRL, there is public support -- at least for the temporary ban of overdraft fees during the coronavirus pandemic. Over three-fourths of Americans in an April survey supported the measure, including 84% of Democrats, 76% of Republicans, and 68% of independents. Additionally, a recent Bankrate survey shows that African-American and Latino respondents paid more in monthly banking fees, which include overdrafts, than respondents of other races. Given the growing call for racial equality and a more inclusive financial system, I think it is possible that a law prohibiting overdraft fees could pass at some point, or maybe the banks will alter the practices themselves.

Which banks make the most from overdraft-related income?

The CRL report breaks down how much in overdraft and NSF fees the 20 largest fee-charging banks collected in 2019, and there really is a wide spectrum. For some of these banks, overdrafts and NSF fees make up a very small portion of non-interest income, while for others it can get close to 40%. Here are the largest five banks for overdraft and NSF fees when you look at it as a percentage of total income. Remember, the CRL report only includes income from the subsidiary bank, so total income could be larger for the actual holding company.

As you can see, Regions Bank relies on overdraft-related fee income the most, at 5.57% of total income. Interestingly enough, none of the largest U.S. banks, like JPMorgan Chase or Bank of America, made the top five. Sure, TD Bank is part of a company that has more than $1 trillion in assets (Toronto-Dominion Bank), but it looks like the CRL study just looked at the U.S. division.

Now, looking at it from the other side, here are the five banks of the 20 largest fee-charging banks that rely the least on overdraft-related fee income as a percentage of total income.

Again, it's pretty interesting how some of the largest banks by assets in the U.S. rely the least on overdraft-related income. I think these numbers are even smaller when you look at total income of the holding companies, because the larger banks tend to make even more income outside the subsidiary banks than larger regional banks.