Please ensure Javascript is enabled for purposes of website accessibility
Log In Help Join The Motley Fool
Free Article Join Over 1 Million Premium Members And Get More In-Depth Stock Guidance and Research
By Ryan Downie - Jun 18, 2021 at 8:30AM

Is it time to buy Zoom stock on the dip, or is it smarter to invest in an index fund representing all of Nasdaq?

Zoom Video Communications (ZM -6.24%) was one of the darlings of the pandemic stock market. People needed dependable remote communication solutions for both work and social functions, and Zoom stepped up to fill that void with secure video conferencing services.

It's obvious how investors became optimistic about the company, but the stock's been on a wild ride over the past 18 months. Before you commit to a potentially volatile stock, you might want to consider if buying an index fund with relatively high growth potential, such as the Nasdaq 100.

Let's take a look at both and see which might be the better buy at the moment. 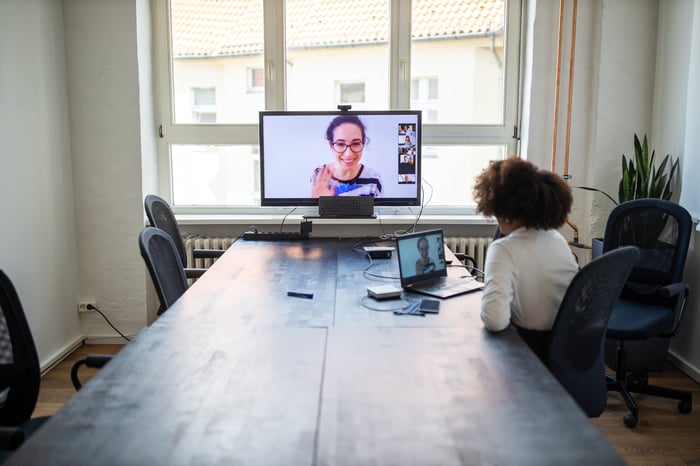 Zoom has been a roller coaster

The negative effects of the pandemic have resulted in genuine tragedy for people all over the world, but some companies actually managed to do well as a result of the changes the pandemic forced on society. Providers of video conferencing software, for instance, became a vital tool for overcoming the logistical hurdles of social distancing.

As a result, Zoom Video stock gained a ton of attention and leaped upward in price throughout 2020 and into 2021. As efforts to beat the pandemic began to succeed and people came to grips with the pandemic, the inflated valuation of several tech stocks -- including Zoom -- started to look a bit over-aggressive. This caused investors to move capital to other stocks that had been beaten down over the past year, and it brought Zoom's price down significantly. 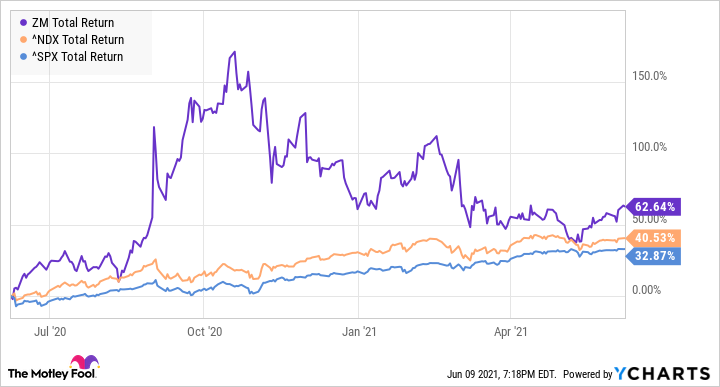 Zoom is a classic growth stock that's enduring more volatility than major indexes. There are some pros and cons to an investment like that, and you should make sure to consider the trade-offs before adding this stock to your portfolio.

Zoom fired up investors over the last year while churning out impressive financial results. People have needed video conferencing to an unprecedented degree, and that's resulted in phenomenal growth. The company's revenue climbed 191% year over year in the most recent quarter. Zoom is also expanding its presence in larger accounts. It now has 2,000 accounts that bring in at least $100,000 in revenue per year. That's nearly triple the number from one year ago. It also reported an 87% increase in the number of customers with 10 or more employees. There are now 500,000 of these customers on its platform.

Zoom has built a strong brand in a growth industry. The company is also increasing its market share in larger business customers, which tend to have higher switching costs and better retention rates.

What's not so great about Zoom

Zoom doesn't come without its drawbacks, however. The company's economic moat is narrow to non-existent, in many analysts' opinion. Its direct competitors include Microsoft and Alphabet, which is always worrisome. It's also fair to expect smaller disruptors to join the industry with improvements upon the products offered by incumbent market leaders. Competition is therefore a major long-term risk that won't go away.

It's fair to assume that work-from-home has received a permanent bump. Investment in the required technology, along with the normalization of remote work practices, likely means that the economy never go back to pre-pandemic norms. However, many businesses are becoming more eager to return to offices and get their employees collaborating in person again. As a result, Zoom might face weaker demand for the next year or two, and it will be nearly impossible to replicate the growth achieved over the past 18 months.

Even if Zoom's fundamentals continue to impress, it's still a very volatile stock with an aggressive valuation. Its forward P/E ratio is over 80, its enterprise-value-to-EBITDA ratio is over 100, and it trades at nearly 25 times book value. In short, a lot of successful future growth is already assumed in the price of the stock. If a few quarters of bad results start to jeopardize that narrative, it has a long way to fall.

The aggressive valuation also exposes the stock to risks associated with monetary policy. When the Federal Reserve raises interest rates, it will probably cause some volatility in the stock market. Equities are likely to endure a brief bear market when interest rates rise, as capital moves toward other asset classes. Concerns about inflation and chatter among economists suggest that the Fed will be forced to curtail monetary stimulus as soon as late 2021, so Zoom might have a tough spell ahead of it, regardless of its financial results.

Zoom versus the Nasdaq

The Nasdaq 100 is heavily skewed toward large-cap tech, so it actually shares some of Zoom's characteristics. The index has been somewhat more volatile than the market as a whole, and its largest constituents with high valuations are also being influenced heavily by monetary policy concerns. However, the Nasdaq provides a more diluted and less aggressive version of those traits.

The Invesco QQQ Trust (QQQ -1.14%) is the most popular ETF tracking the Nasdaq 100. The fund has a trailing P/E ratio of 39 and price-to-book just above eight, so its valuation isn't nearly as extreme as Zoom's.

Zoom ultimately provides more upside than any major index, but it comes with considerably more risk. That includes higher volatility as well as company-specific risk that could materialize if Zoom struggles with an evolving competitive landscape. This is the typical trade-off between portfolio diversification and concentration in individual stocks.

The vast majority of people are better off owning the whole Nasdaq 100, though Zoom could be a great high-upside investment if your bases are covered elsewhere in the portfolio. In this case, there are serious long-term risks inherent in the stock that are too great to ignore. There's no problem whatsoever with investing in Zoom if you like the company, but it's not the type of stock you want to own without having diversified positions to balance it.

4 Billion Reasons to Get Excited for Zoom Stock

This Company Is a Cash Machine, and It's a Long-Term, Stable Tech Stock