Please ensure Javascript is enabled for purposes of website accessibility
Log In Help Join The Motley Fool
Free Article Join Over 1 Million Premium Members And Get More In-Depth Stock Guidance and Research
By Patrick Bafuma - Jun 20, 2021 at 6:12AM

Beyond its lofty price tag, there are other impediments to big sales of aducanamab that the market largely ignored this week.

Media discussion about newly approved Alzheimer's disease treatment Aduhelm (aducanumab) has focused much attention on its high price tag and questionable efficacy. But the drug, which was developed by Biogen (BIIB -0.94%) in partnership with Japanese pharma Eisai (ESALY -1.74%), has additional hurdles and risks that went largely undiscussed.

Biogen is charging approximately $56,000 for a year's worth of doses, so given that there are 30 million Alzheimer's patients worldwide -- 1 million to 2 million of them in the U.S. alone -- Aduhelm need not achieve significant market penetration to be a winner. Yet despite its sizable potential market, there are three less-discussed reasons why sales of the drug may still fall short of expectations.

Aduhelm must be administered to patients via one-hour monthly infusions. Because this is a recurrent intravenous (IV) therapy, patients will have two options: Have an IV placed every time they go for treatment, or undergo placement of an infusion port -- a device implanted under the skin to which medical professionals can easily and rapidly attach a new IV. Getting an infusion port often requires a separate visit to the hospital for placement by a specialist, sometimes under sedation. 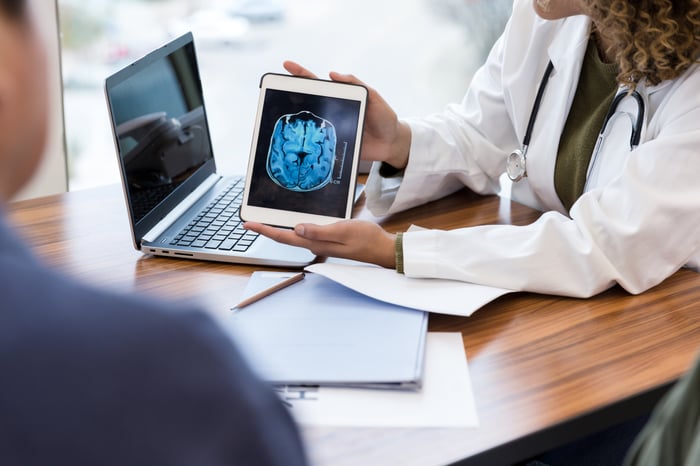 Beyond the fact that the need for IV access will be an issue for patients, there's also the question of where those treatments will take place. Infusion centers are not designed for the memory care patient population, and local neurology offices are unlikely to be financially prepared to stockpile doses of such an expensive treatment.

Home visits by skilled nurses are one potential option. A few years ago, a pilot program in Australia tested in-home infusions for patients receiving another Biogen drug, Tysabri. That test proved successful, but such a solution would be more time-intensive in terms of medical personnel.

A much more palatable option for all parties would be if an intramuscular or subcutaneous shot were to be developed. But there is no indication yet from the companies that they are working on such a version of Aduhelm.

While much of the spotlight has been on the price that Biogen is charging for the drug itself, there are additional costs and bottlenecks to be considered. Patients receiving Aduhelm will require multiple advanced imaging scans in their first year of treatment. Among them is an amyloid PET scan, which can detect the buildup of certain plaques thought to play a role in the development of Alzheimer's disease. And while those scans -- which cost approximately $4,000 to $5,000 apiece -- can aid in the diagnosis of Alzheimer's, Medicare and Medicaid don't currently cover them. (Biogen is publicly advocating for the government health insurance plans to begin covering amyloid PET tests.)

Then there are the MRIs. The FDA labeling for Aduhelm is quite clear that patients should have an MRI before beginning monthly treatments, and again prior to the seventh and 12th doses. This creates added hoops to jump through in terms of getting prior authorization from health insurers, scheduling, and getting to additional appointments. That's not to mention the financial impact -- the minimum cost of a brain MRI is about $1,600, and they can run to upwards of $8,000.

In short, treatment with Aduhelm will carry a lot of extra costs beyond its high sticker price, and those can really add up over time.

Beyond all the hurdles mentioned above, there's also the potential for adverse events to consider. Amyloid-related imaging abnormalities, or ARIA, are most commonly seen as temporary swellings in areas of the brain. Usually, they resolve over time. Sometimes, they don't. And sometimes that results in detrimental bleeding in the brain. In clinical trials of aducanumab, ARIA occurred rather frequently -- in up to 41% of patients, with 24% of them developing symptoms (most commonly headache, confusion, dizziness, and vision changes). Not only that, but 8% of patients had some form of increased confusion or disorientation -- twice the percentage who displayed those symptoms in the placebo arm.

So what happens when a patient develops ARIA? More MRIs. More medical workups for increased confusion. More delays in care. Potentially more hospitalizations and adverse outcomes for patients already at risk of delirium. And likely, discontinuation of the drug.

Biogen stock has soared by over 40% since the FDA approved Aduhelm, adding more than $20 billion to its market cap. But at this point, healthcare investors may want to sit on the sidelines and watch as the situation with this pharma unfolds.  Sales of its other drugs are declining. If Biogen is able to get significant numbers of patients onto Aduhelm and maintain them on it, then it could become a long-term winner. But until there's some clear evidence that the company can do that -- or until a version of the treatment that doesn't require IV infusion is in its pipeline and more real-world data on ARIA is obtained -- I'm scratching Biogen from my watch list.