Please ensure Javascript is enabled for purposes of website accessibility
Log In Help Join The Motley Fool
Free Article Join Over 1 Million Premium Members And Get More In-Depth Stock Guidance and Research
By Adria Cimino - Jun 13, 2021 at 6:15AM

The coming months will offer important clues about long-term revenue.

Biogen (BIIB -0.57%) investors cheered earlier this week after the biotech company scored a major regulatory victory. The U.S. Food and Drug Administration approved its controversial Alzheimer's drug. As a result, the shares soared nearly 50% in one trading session.

Now, some investors are wondering whether it's too late to get in on the Biogen story. After all, the last time Biogen was trading at or above these levels was more than five years ago. That was before generic competition and biosimilars began taking market share away from its blockbuster multiple sclerosis (MS) drugs. Let's take a closer look at whether the latest drug approval means more sales -- and share gains -- ahead for this biotech giant. 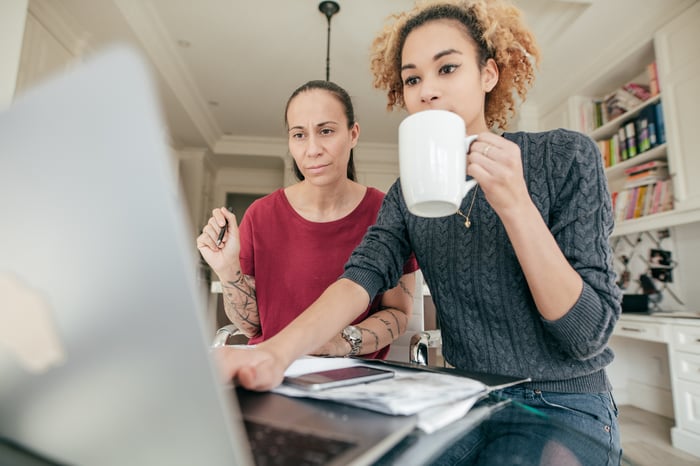 A nod from the FDA

The FDA surprised some with its decision to approve aducanumab -- to be commercialized as Aduhelm. First, the regulatory agency didn't follow the advice of its advisory committee. The committee in November voted against approving the drug. The FDA isn't obligated to go along with its advisory committees. But it usually does.

Why did the committee vote against approval? And why is Aduhelm considered "controversial"? That has to do with its late-stage development. After a futility study showed the drug was unlikely to work, Biogen ended the program. Then, the company shocked investors six months later when it revived the program. Biogen said a post-study analysis showed higher doses of the drug actually did reduce clinical decline. That's measured by daily function and cognition.

Many experts say regulatory approvals shouldn't be based on post-study analyses. And some, such as Dr. David S. Knopman, even say an additional trial should have been done -- before seeking approval. Knopman stepped down from the FDA advisory committee after the Aduhelm approval. He told Reuters he was "disappointed" with the FDA's treatment of the committee's advice. (Knopman didn't actually vote since he was a Biogen site investigator for the Aduhelm trials.)

Biogen's studies of Aduhelm aren't over, however. The FDA is requiring the company to conduct a new trial of the drug to confirm clinical benefit. That will happen while the drug is commercialized. So, Biogen can start generating revenue in the meantime. Analysts expect Aduhelm to bring in about $10 billion annually.

That kind of revenue is possible if doctors jump on board and prescribe the medication. I wrote about this recently as the biggest challenge Biogen faces in the year ahead. That's because the experts who have opposed the approval in many cases are doctors who treat Alzheimer's patients. So, this will be a point to watch in the months to come.

And that point will determine whether Biogen shares have potential to climb higher. Aduhelm is a crucial product for Biogen right now. Growth is on the decline for the company's billion-dollar MS portfolio. In the first quarter, sales of MS drugs dropped 26%. And sales of MS blockbuster Tecfidera slid to about $479 million from more than $1 billion in the year-earlier period. Sales of Biogen's other major drugs are on the decline too.

Biogen is at a turning point right now. The portfolio that brought in so much revenue in the past won't be a source of growth in the coming years. The company needs a new growth driver. Will that be Aduhelm? If Aduhelm eventually impresses doctors and patients' families, the drug could create a new and big wave of growth for Biogen. And Biogen has more than 25 drug candidates in the pipeline. It's reasonable to expect some of them may drive more revenue farther down the road.

The pipeline is what makes me positive on Biogen in the long term. But success may take a while. And we can't yet be certain that Aduhelm will lead the way. The catalyst for lasting share price gains will be sales growth from a newer product (or products) -- but right now, it's too early to say if that product will be Aduhelm.

All of this means it's not too late to buy shares of Biogen. It actually may be too early.