Please ensure Javascript is enabled for purposes of website accessibility
Log In Help Join The Motley Fool
Free Article Join Over 1 Million Premium Members And Get More In-Depth Stock Guidance and Research
By Jason Hawthorne - Jun 24, 2021 at 6:22AM

Artificial intelligence and machine learning are competitive advantages they've had from the start.

Artificial intelligence (AI) is popping up everywhere. That's because it's a competitive advantage for companies that harness its power. Like computers, the internet, and the cloud before it, many companies claim to use it. But the truly innovative companies have built their businesses on AI from the ground up. And they are quickly outpacing competitors.

Three companies that are following this path to carve out entirely new approaches to old problems are Moderna (MRNA 3.27%), Upstart Holdings (UPST -4.83%), and The Trade Desk (TTD 1.24%). Although the stock prices of all have risen sharply, market-beating gains should still lie ahead. 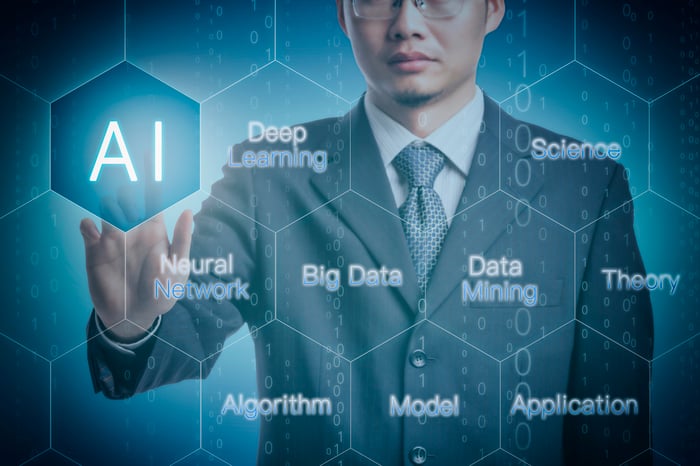 Moderna entered the public's consciousness when it became an early leader in the race to develop a vaccine for COVID-19. The company took just 42 days from getting the genome of the virus to shipping a drug candidate for human testing. That speed was by design. CEO Stephane Bancel set out to make Moderna "the first truly digital biotech company."

It has invested more than $100 million in digitization, automation, and data science -- AI and machine learning (ML) -- since its inception, and plans to double down over the next five years. It uses machine learning to optimize manufacturing processes and increase the quality of the mRNA it produces. This lowers the cost and increases how fast it can design, develop, and select new therapies for trial.

The Moderna COVID-19 vaccine is just the first treatment to bear fruit for patients and shareholders. The stock is up 965% since the beginning of 2020 and management expects it to generate at least $19.2 billion in revenue this year. The company isn't stopping there. It has 25 candidates in its pipeline, including some for solid tumors and personalized cancer vaccines. If its COVID-19 vaccine is any indication, Moderna could be on the cusp of becoming the leader in a new era of medicine. Its ability to employ AI and ML is accelerating the change.

Traditional lending decisions are typically only based on a few variables and rarely quantify risk. That leaves many consumers paying more for loans than they should or unable to obtain them at all. That's also bad for borrowers, who need to compete in a highly fragmented industry.

Upstart Holdings has created a better way to assess risk and improve credit decisions. Its decision engine isn't a manual process that has been digitized. Instead, its machine learning models -- trained on more than 1,000 variables and 10.5 million repayment events -- augment or replace the traditional process. The company is also using ML to reduce the friction borrowers experience in the verification process. In all, it has helped the company grow loan volume by a factor of 20 over the past four years.

The company mostly counts regional banks and credit unions as its customers. They're adopting the approach as a way to compete with larger financial institutions. The AI-enhanced lending has helped them increase loan volume while decreasing the average interest rate borrowers are paying. That's true for traditionally underserved demographics as well. It's a win-win, and the Consumer Financial Protection Bureau (CFPB) agrees. Using the agency's criteria, Upstart's AI model approved 27% more loan applications at a 16% lower average interest rate. The company is in year two of a "no action letter" from the CFPB -- a stamp of approval.

Lenders have signed up in droves. In the first quarter of 2021, revenue was up 90%. The company is expecting the top line to grow 157% for the full fiscal year. Some of the growth is attributable to a recent acquisition that gives it access to the $1.3 trillion auto lending industry. Until now, it was focused on personal loans. Upstart is methodically making its way through the consumer lending market using machine learning to benefit both lenders and borrowers. It's in the early innings of a disruption that could go on for decades. The numbers show it's gaining steam.

Ever since smartphones became ubiquitous, how people enjoy content has changed. The media landscape has become more digital, leading to audiences spread out across websites, streaming apps, and the like. It's led to advertisers having to work harder to reach the same large audiences they used to. The Trade Desk is helping them work smarter.

The company's self-service platform lets advertisers create and manage their ad campaigns in a way that optimizes spending across multiple channels and formats. Since the company only works with ad buyers, they are viewed as a trusted enabler -- not a disruptor -- adding value to the industry. On the company's platform, advertisers can use their own data, as well as build their own applications. Of course, The Trade Desk offers its own services, including machine learning models that optimize campaigns. The company has an incredible amount of data, and its models improve with every ad. It's a formula that since 2016 has seen revenue and the stock climb 340% and 2,000%, respectively.

The stock is currently 33% off of its highs after announcements from Apple and Google about eliminating the use of cookies -- the code on websites that identifies users and helps track them across the internet. Those only account for about 20% of data-driven ads but the Trade Desk has an answer. It created Unified ID (UID) 2.0 as an anonymized alternative and it has a lot of momentum. It made it open source, essentially donating it to the industry.

Analysts are still asking if consumers will opt in to the system. According to CEO Jeff Green, they will. And he believes the changes will ultimately prove positive for the company. With more than a decade adapting to changes in the industry, he is in the best position to know. For that reason, any sell-off in the stock is likely a buying opportunity for investors with a long-term horizon.