Please ensure Javascript is enabled for purposes of website accessibility
Log In Help Join The Motley Fool
Free Article Join Over 1 Million Premium Members And Get More In-Depth Stock Guidance and Research
By Jason Hawthorne - Jun 22, 2021 at 10:00AM

The company is using technology to distance itself from the pack.

With the advances in both software and hardware, investors are recognizing that every company is a technology company. Rather than a back office function supporting a few productivity tools, technology has become a differentiator in industries that may seem to have little to do with software and semiconductors.

In the biotech industry, Moderna (MRNA -5.06%) recognized this from the start. It was founded in 2010 with an eye on tech-enabled speed as its killer app. The company leveraged the foresight during the pandemic to deliver a COVID vaccine in less than a year. Looking toward the future, management continues to highlight how technology will be the driving force behind its success as a new kind of drug developer. 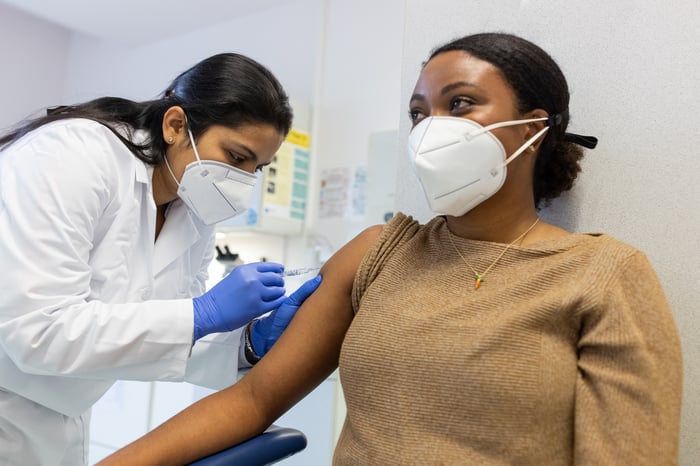 Set up for success

In its initial 2018 filing to go public, Moderna's ambition was to become a platform for drug development. That's different from most biotechs that raise money to tackle a particular disease. The company even built its Norwood, Massachusetts facility in 2018 as a fully integrated, digital facility capable of every process that converts raw materials into finished vials for an administration site. Thanks to manufacturing automation, management estimates 10 million doses per year could be manufactured there.

If the proof is in the results, Moderna's speak for themselves. The biotech took only 42 day from sequencing the SARS-C0V-2 genome to shipping a drug for the phase 1 trial. However, the Moderna COVID-19 vaccine isn't the only drug benefiting from the company's use of technology.

For its personalized cancer vaccine (PCV), it is able to take a biopsy, sequence the tumor's genome, then design, manufacture, and administer the drug all in a few weeks. Since 2018, the speed of this process has come down 40% while the cost has dropped 65%. Similarly, the cost to produce its vaccine for cytomegalovirus has fallen 69% since 2019.

Yet another application is Moderna's use of AI. The company is able to predict virus mutations -- like those in SARS-CoV-2 -- as well as model the behavior of proteins and enzymes. This essentially accelerates the process of evolution so researchers can select appropriate candidates for further development. Again, this streamlines steps and accelerates the process.

A framework for the future

CEO Stephan Bancel wants to see those types of examples in everything Moderna does. Citing pockets of AI expertise surrounded by leaders who have never used it, the company is establishing an AI academy. The goal is to leverage the technology to accelerate learning throughout the entire enterprise. It's part of the Bancel's commitment to reinvest profits from the COVID vaccine back into the business. Traditional drugmakers should take note.

In the first quarter of 2021, spending on research and development was up four times what it was in the same period a year ago. The spending on digital, automation, and AI is projected to be $170 million. That's almost three times what it was last year and more than six times what it was in 2019. Bancel is taking advantage of the COVID windfall to extend the company's technological advantages into areas like clinical trial operations and adverse event analysis. With $8.2 billion of cash on the balance sheet at the end of March, and agreements for hundreds of millions of doses of its COVID vaccine stretching out years, Moderna has a lot of ammunition.

In 2020, the company's technology advantage shone bright. As it invests more to accelerate automation and AI, the gap between its scientific productivity and traditional drug developers is set to expand. From the beginning, Stephan Bancel seemed to know what Moderna's secret weapon would be, and now he's reloading.