Please ensure Javascript is enabled for purposes of website accessibility
Log In Help Join The Motley Fool
Free Article Join Over 1 Million Premium Members And Get More In-Depth Stock Guidance and Research
By Jon Quast - Jun 25, 2021 at 8:33AM

New consumer preferences are wind in the sails for many fitness companies, but Under Armour appears to be missing the boat.

Shares of exercise apparel company Under Armour (UAA -2.83%) (UA -2.49%) are currently sitting 60% below their all-time high reached in 2015. The stock has dramatically underperformed the market during this time, and the business struggled in 2020 with the pandemic too. But now with vaccinations increasing, could it finally be ready to turn the corner and create value for its shareholders?

As we'll see, I don't believe Under Armour is positioning itself for success. This is because it doesn't appear to be playing to its strengths in an important emerging secular trend. 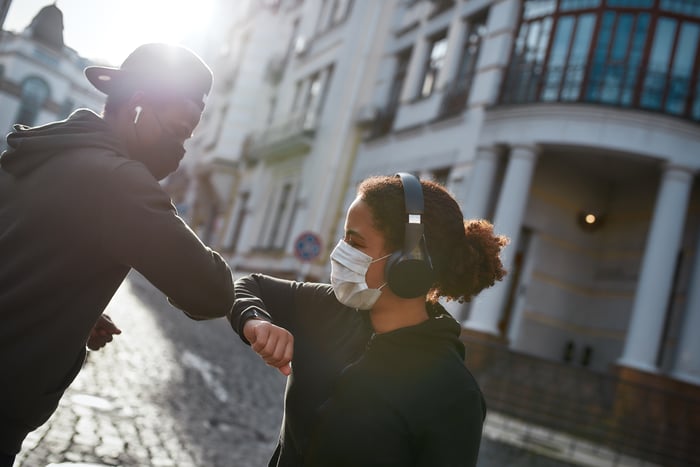 Where the vision falls short

When buying stocks, there are many things to think about, including business models and valuations, but investors shouldn't overlook secular trends. Not every company is positioning itself equally to benefit from shifts in consumer behavior, and I believe this applies to Under Armour.

The company struggled in 2020. For the year, revenue was down 15% from 2019, and it recorded a massive net loss of $549 million. That said, almost all apparel companies struggled because of the pandemic. Therefore, I'm not going to fixate on last year's challenges. Rather, I'd like to focus on one of the only things that worked well for Under Armour in 2020: connected fitness.

The company sells running shoes that connect to its MapMyRun app. With this platform, users can track their stats and connect with other users. Early in the pandemic, this might have been the only high point of the company's business. For example, in the second quarter of 2020, the number of customers who completed their first connected workout was up 150% year over year.

It's more than running shoes. Connected fitness is a profound consumer trend that must be a big consideration when fitness companies form their business strategies. For example, some people believe Peloton Interactive has been successful simply because the coronavirus closed brick-and-mortar gyms, but I don't believe that's right.

Consider that Peloton's revenue was up 99% in fiscal 2018 and 110% in fiscal 2019 -- both periods before the pandemic. I believe the key to its success is how the company's products incorporate social interactive technologies into an otherwise solo exercise experience, which is proving to be what consumers have increasingly wanted for years.

For this same reason, I believe Nautilus was simply a pandemic winner: Its sales fell in 2018 and 2019 before spiking in 2020, demonstrating that the coronavirus was indeed the primary catalyst. But because connected fitness is a long-term consumer trend, Nautilus is astute to now emulate Peloton. The former is actively developing more connected-fitness features into its hardware to sustain its newfound success. And you could say lululemon athletica is leaning into the connected-fitness trend as well with its acquisition of MIRROR -- a good move.

By contrast, instead of leaning into this growing opportunity, Under Armour is largely pivoting away from it. In December, the company sold its MyFitnessPal platform for $345 million. MyFitnessPal was the largest part of the connected-fitness segment of its business. And it's apparent connected fitness isn't a prioritized part of its strategy, considering MapMyRun revenue will now be lumped together with plain ol' "other" revenue.

Here are the meager goals

Under Armour's stated goals for 2021 are to simply get its business back to where it was previously. It's projecting double-digit year-over-year revenue growth in 2021, taking it back to its 2019 figure at around $5.2 billion. And the company hopes its operating margin can reach double-digit levels long term, also what it generated in previous years. For what it's worth, management said its business is now set up to break even around $4.7 billion in annual revenue, so its revenue goal should help it achieve the profitability it's targeting.

To be clear, getting its business back to previous levels is good. It's just not an inspiring vision to get excited about. Perhaps I would feel differently if Under Armour stock were trading at a discount. However, the chart below suggests the market is already pricing in this recovery. 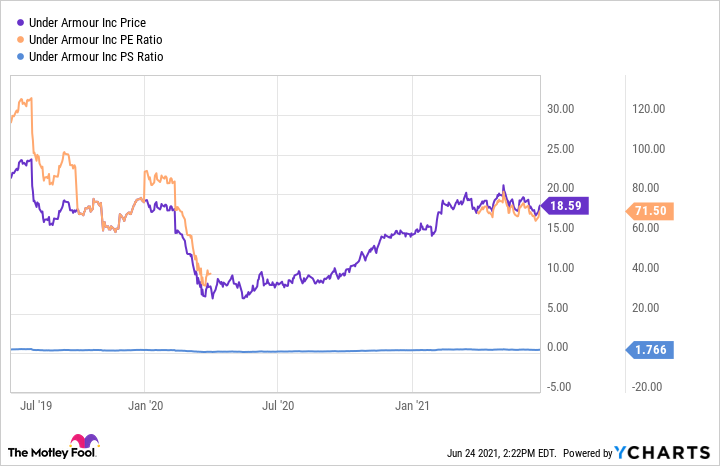 Under Armour already trades in line to slightly above where it traded for much of 2019. Therefore, this isn't even a short-term value-stock opportunity. If you buy the stock today, you're counting on its business returning to what it once was and also expecting it to reach new heights.

Given its long history of underperformance, I'm not sure I'm ready to believe that the business is on the cusp of doing better than ever. Furthermore, given it's not doubling down on connected fitness now, I don't think it's positioning itself for market-beating performance, either. For these reasons, I remain on the sidelines with Under Armour stock.