These oil stocks could produce a gusher of profits as crude prices continue rallying.

Bank of America recently made a bold prediction. The banking giant believes that supply and demand imbalances in the oil market will push crude prices up to $100 a barrel by next year. The bank isn't alone -- big oil executives also believe oil prices could top $100 a barrel as the global economy roars back to life amid tightening supplies.

That scenario would undoubtedly be a boon for oil stocks. With that in mind, we asked some of our energy contributors what oil stocks they believe are the most compelling buys as oil prices head toward triple digits. Here's why they think Occidental Petroleum (OXY 0.06%), Marathon Oil (MRO 0.63%), and Devon Energy (DVN 1.69%) have some of the best upside potential to triple digit oil. 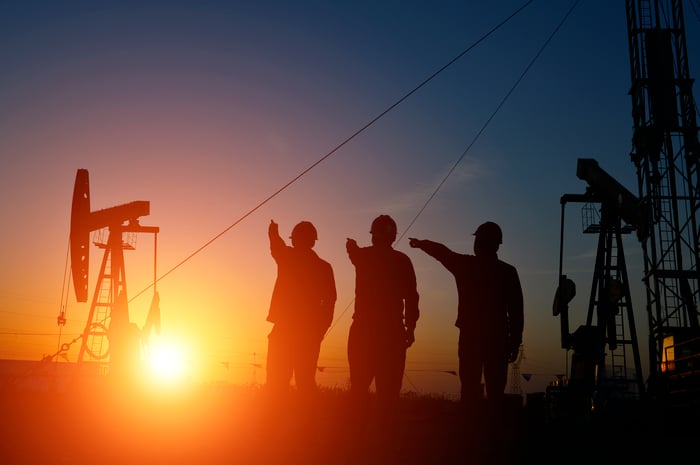 Reuben Gregg Brewer (Occidental Petroleum): I wouldn't call Occidental Petroleum a buy and hold type of energy stock, given the self-inflicted wounds it suffered during the 2020 oil downturn. In fact, the takeover battle for Anadarko Petroleum that it won over Chevron (CVX 0.14%) bordered on the side of hubris. And it left the company ill-prepared for the pandemic-driven drop in oil demand and prices.

And yet, as oil rebounds, with some suggesting that $100 a barrel is a real possibility, more aggressive investors looking for a way to play such a commodity move might still be interested. There's two reasons for this. First, as an oil driller Occidental Petroleum will clearly benefit from a big rise in this key commodity. But the bigger reason is that such an increase will make it easier for management to deal with the lingering impacts of the Anadarko deal, notably its still heavily leveraged balance sheet. 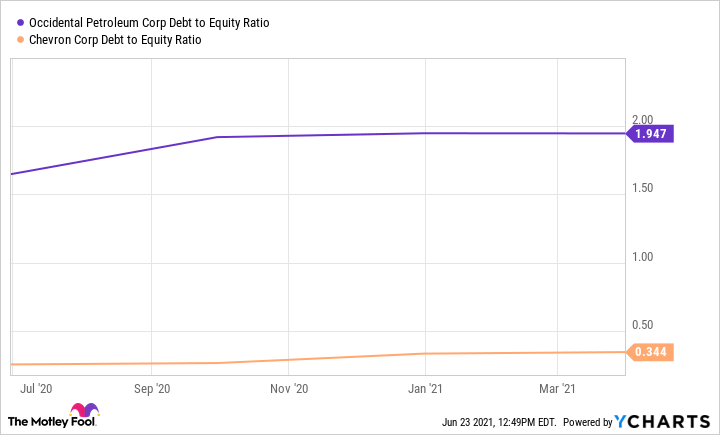 So, there's the direct top- and bottom-line benefit here (which all energy companies will likely see) and the follow-on effect of an improving financial structure. Either one alone would likely get investors excited, but both together could lead to a complete reevaluation of the company's future -- for the better this time around. The Anadarko misstep should probably keep conservative investors away, but more aggressive types might view Occidental, warts and all, as something of a leveraged bet.

Neha Chamaria (Marathon Oil): Commodity prices don't just drive Marathon Oil's revenue and cash flows, but they're also the single biggest deciding factor behind the company's capital spending and capital allocation plans, which is why the ongoing rally in crude prices is great news for Marathon Oil. Importantly, crude is hitting two-year highs even as I write this, but Marathon Oil stock is still trading below its 2019 level.

Consider this: Marathon expects to generate free cash flow (FCF) worth $1.1 billion this year at an average WTI crude price of $50 per barrel. At $60 a barrel, the company could generate as much as $1.6 billion in FCF! With crude having already surpassed $70 per barrel as of this writing, Marathon should therefore be able to generate even higher cash flows and use the extra cash to pay down more debt and reward shareholders with bigger returns. As of the end of the first quarter, Marathon had already repaid $500 million in debt and was targeting another $500 million debt reduction this year. It also raised its quarterly dividend by 33% in Q1.

A higher oil-price environment, in fact, should set Marathon up for solid growth for years to come, considering it could generate FCF worth nearly $5 billion over the next five years at an average crude price of only $50 per barrel. And it isn't just oil prices. While flexing production as per market conditions, the company is also tightening its grip on costs, and aims to cut its production and general and administration expenses combined by nearly 30% this year versus 2019 levels. With management prioritizing the dividend and debt reduction, Marathon shareholders have a lot to look forward to as long as oil keeps rising.

The company paid its first variable dividend this past March based on its fourth-quarter cash flow. It distributed 50% of its excess cash, which worked out to $0.19 per share. That was almost double its fixed quarterly dividend of $0.11 per share. The company will make its next variable payout at the end of this month. While it's only paying out 48% of its excess cash this quarter, at $0.23 per share, it's 13% above the previous quarter's rate and more than double its base quarterly rate. Driving that increase was the improvement in oil prices from an average of $42.65 a barrel in the fourth quarter to $57.87 in the first quarter.

With oil prices continuing to rise -- they're close to $75 a barrel right now -- Devon's variable dividend payments should grow even bigger. If oil does indeed hit triple digits again, Devon could pay a monster variable dividend. That potential windfall of cash payments makes Devon an oil stock that investors won't want to miss as oil prices race toward $100.