Please ensure Javascript is enabled for purposes of website accessibility
Log In Help Join The Motley Fool
Free Article Join Over 1 Million Premium Members And Get More In-Depth Stock Guidance and Research
By Dan Caplinger - Updated Jun 28, 2021 at 10:17AM

Some might be surprised to see income-paying stocks among the ARK Invest founder's high-growth picks.

Cathie Wood has become an investing sensation in recent years. As the founder of the ARK Invest family of exchange-traded funds , amazing returns in 2020 gave her a reputation for finding little-followed high-growth companies early in their existence and riding them to big long-term gains. Investors in her ARK Innovation ETF (ARKK 4.19%) and other funds have reaped the rewards.

Given Wood's emphasis on high-growth sectors of the market, you might be surprised to learn that some of her choices for fund holdings actually carry impressive dividend yields. For most growing companies, returning capital to shareholders through dividend payments takes a backseat to reinvesting available money back into the business to grow it further. Nevertheless, below, we'll take a closer look at some of ARK Invest's high-dividend holdings to see why they're appealing both to growth and income investors. 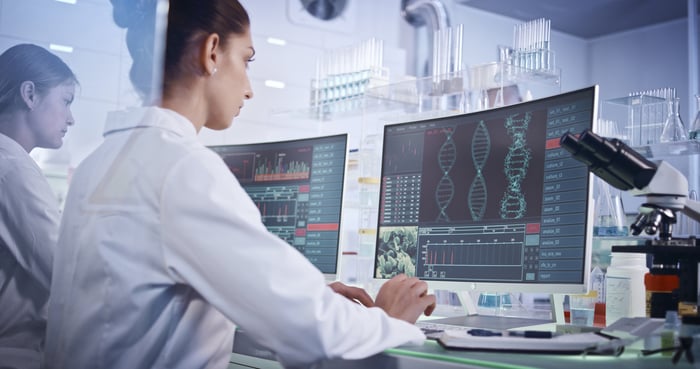 AbbVie (ABBV 0.37%) is perhaps the best-known dividend stock among the holdings of Cathie Wood's ETFs. The pharmaceutical company qualifies as a Dividend Aristocrat, as it has consistently boosted its annual payouts to shareholders since its spinoff from Abbott Laboratories (ABT 0.90%) in the early 2010s. Abbott itself maintained a long track record that goes back roughly half a century.

AbbVie isn't a huge holding for Wood, but her ARK Genomic Revolution ETF (ARKG 3.61%) has about $60 million invested in the pharma company. That's roughly 0.66% of the fund's total assets.

With a market capitalization of $200 billion, AbbVie is big enough to make strategic acquisitions of significant companies in key areas that Wood sees as having high growth prospects. Those include long-read genomic sequencing, multi-cancer screening, and cell and gene therapies. AbbVie has already done considerable research and development on experimental cancer drugs using genomic analysis, and promising results suggest the company will make even more of an effort to move in that direction. Meanwhile, investors benefit from a dividend yield topping 4.5%.

Novartis (NVS 0.12%) is also appealing to growth and income investors alike. The stock currently pays a dividend yield of 3.5%, but like AbbVie, the pharmaceutical company is looking into promising therapies that it hopes to use to come up with generations of future treatments to keep sales climbing over the long run.

Novartis is also a higher-conviction pick for Wood. You'll find its shares both in the Genomics ETF and in the flagship Innovation ETF, with total holdings combining to a nearly $380 million investment in the Swiss drugmaker. It's a top-10 holding in the Genomics ETF, making up more than 3% of total assets.

Novartis has done considerable work in the drug discovery realm, with efforts to use technology to build a digital data science platform. That makes the company somewhat of a pick-and-shovel play for Wood, as innovations that Novartis develops might end up proving useful to the other genomics-focused companies in which her ETFs invest.

Lastly, Takeda Pharmaceuticals (TAK 0.92%) plays a significant role in Wood's genomics-related positions. She's invested more than $250 million in the Japanese company, giving it a nearly 3% position in the Genomics ETF. It also boasts a dividend yield of nearly 5%, putting it in the upper echelon even among income investor-friendly pharma companies.

Takeda isn't a household name for many U.S. investors, but the company has concentrated its efforts lately on strategic acquisitions to bolster its R&D and drug pipeline capabilities. The Asian pharma giant has worked with major COVID-19 vaccine makers like Moderna (MRNA -0.37%) and Novavax (NVAX 2.80%) on the manufacturing and commercialization front, and it has also built up a stable of candidate treatments for cancer, liver disease, and other illnesses.

Of particular importance to Wood might be Takeda's leukemia drug Iclusig, as it fits well with her overall themes in the space. Takeda stock has lost significant value in recent years, and that makes Wood look a bit out of character as a buyer on attractive valuations as well as growth prospects.

Get paid with growth stocks

Most of the stocks you'll find in Cathie Wood's ARK Invest funds are plowing every penny of cash flow they get back into their respective companies. However, even dividend investors can find some attractive picks among Wood's favorites. Those seeking income would do well to take a closer look at Takeda, Novartis, and AbbVie.

3 Ways to Become a Millionaire Making Money in Your Sleep

The 3 Best Dividend Aristocrats of 2017