Please ensure Javascript is enabled for purposes of website accessibility
Log In Help Join The Motley Fool
Free Article Join Over 1 Million Premium Members And Get More In-Depth Stock Guidance and Research
By Anirudh Shankar - Apr 24, 2021 at 5:28AM

You might want to consider adding this company to your portfolio.

The Japanese pharmaceutical giant Takeda Pharmaceuticals (TAK 0.50%) is a name a lot of investors may not be familiar with. When we think of big pharmaceutical businesses, companies like Johnson & Johnson, Merck, and Pfizer usually come to mind first. Takeda has spent the last few years working with a very underwhelming pipeline of drugs, and has used its research and development (R&D) downtime to expand its presence outside of Asia through acquisitions and partnerships. I think that Takeda will be able to differentiate itself by bringing new drugs to market in a unique strategy by unveiled by management in a recent investor presentation.

The stock is currently off its all-time highs by more than 45%. However, in recent guidance, the company established some very ambitious goals for the next few years, such as releasing many new drugs to market, reducing debt, and shoring up its balance sheet. This will drive growth for Takeda and its investors. 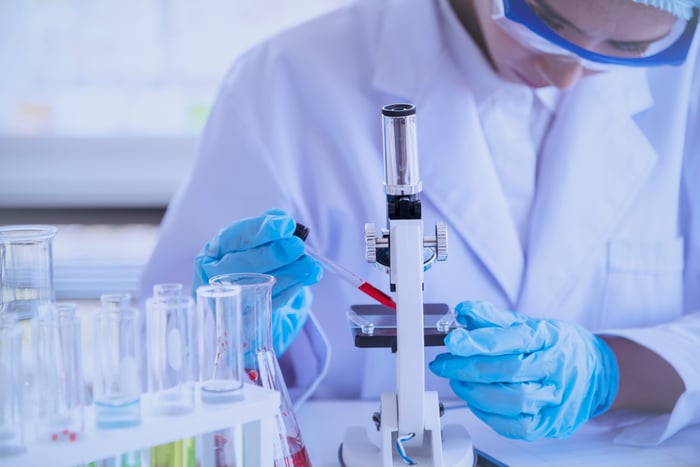 Trading 50% off its highs

Founded in 1781 but incorporated in 1925, Takeda is currently the largest pharmaceutical company by market cap in Asia, sitting at a valuation over 5.5 trillion Japanese yen (JPY), or roughly $50 billion. The company operates in different segments like metabolic disorders, neurology, inflammation, and oncology.

Recently, though, the stock has fallen off its all-time highs of around $30 a share and now sits at about $17. The problems for the company go back to 2014, when Takeda bid to acquire Shire Pharmaceuticals to avoid tax, as the company was tax domiciled in Ireland. After struggling to produce a strong pipeline, Takeda was looking to make an acquisition to drive future growth and made a bid to take over Shire while also being able to reduce their corporate tax burden.

A deal was reached in 2019, when Shire accepted Takeda's bid for about $62 billion. However, Takeda also had to take on Shire's debt, which would value the $62 billion deal at around $80 billion. The market did not take kindly to the deal, and the increased debt Takeda had to take on. Its interest-bearing debt as of March 31, 2019, shortly after the Shire deal, had increased nearly six times in a year to 5.75 trillion yen. Another reason for the major sell-off in the stock is the fact Takeda was selling assets to build up its cash position after these moves.

The current and future pipelines for Takeda look very promising. Management is focused on R&D and innovation through its wave tier system for releasing drugs. Wave one, which targets near-term growth, will bring 11 new molecular entities to market and have a pipeline for 15 more potential drug approvals through 2024. Takeda is also supporting global access to three different COVID-19 vaccines, currently working with Novavax, Moderna, and IDT Biologika to support manufacturing and commercialization.

Wave two of the pipeline supports 30 programs targeting illnesses like liver disease and multiple cancers with the potential for approval from 2025 into the future. Management decided to take this approach to lessen developmental cost, offer a faster track to registration, enhance patent protection, and reduce risk by partnering with other companies.

Although Takeda has numerous drugs on the market, three are driving sales for its 15-plus products. In its fiscal year from April 2019 to March 2020, Entyvio, Immunoglobulin, and Vyvanse delivered revenues of $3.2 billion, $2.76 billion, and $2.535 billion, respectively.

A major concern for investors has been Takeda's massive debt levels after the acquisition of Shire. However, management has maintained a commitment to significantly reducing the debt over the next few years. Takeda currently has a net debt-to-EBITDA (earnings before interest, tax, depreciation, and amortization) ratio of 4.7 following the acquisition. Generally, when looking at companies and their balance sheet, we would ideally want net debt-to-EBITDA ratios of less than 3.0. The lower the ratio, the higher the probability that the company is able to pay off its debts. If a company has a ratio higher than three, that might serve as a warning signal that the company may not be able to pay off its debt in the future.

Takeda's net debt-to-EBITDA came down to 3.6 as of the end of 2020. In its recent financial guidance, Takeda management is committed to bringing this ratio down to 2.0 by 2024. This would significantly reduce the company's leverage and free up room for share buybacks or increased dividend payments..

Buy in with the smart money

One way we can gauge possible deals in the market is to look at what the big money is doing -- notably, what the renowned investors are buying up. Cathie Wood is one such investor who has eclipsed the market the last few years in total returns through her investment strategy and vehicles like the ARK Invest ETFs. Looking at her last quarterly filing, Wood continues to accumulate Takeda stock: Her ARKG fund bought another 1.215 million shares in January..

Now, this might have something to do with Takeda getting U.S. Food and Drug Administration approval for the leukemia drug, Iclusig. However, what we can take away from this recent buy is that now might be a great opportunity to pick up Takeda shares while they're still trading on the cheap. The company still trades at almost half of what it was three years ago, and boasts a 4.23% dividend yield to keep investors satisfied until a move toward the upside comes.

Novavax Partners With Takeda to Sell Its Coronavirus Vaccine in Japan