Kinder Morgan's (NYSE:KMI) dividend raise, solid 2021 first-half performance, and excellent full-year guidance are all signs its business is performing well. At the same time, the company has done an excellent job paying down debt and improving the quality of its balance sheet. Lower debt means less interest and leverage, making Kinder Morgan a healthier company than in years past.

Let's take a look at the company's balance sheet to determine if its newfound financial health makes it worth buying now. 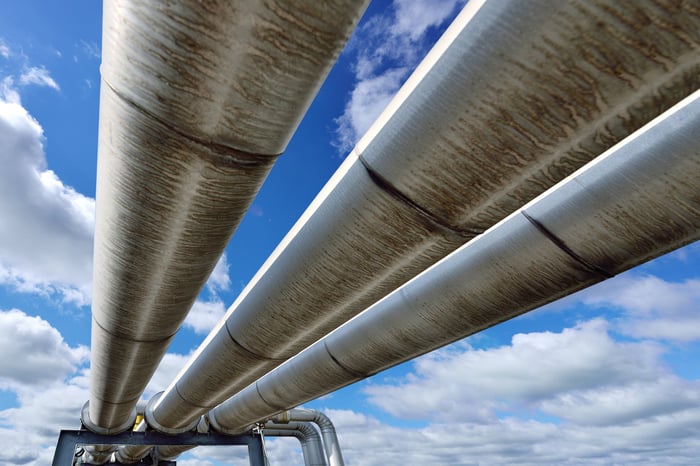 When oil and gas companies get in trouble, it's usually due to too much debt. Yes, lower oil and gas prices play a role, but financially responsible companies find a way to keep cash reserves on hand so they can ride out the downturns. Kinder Morgan was hit hard by the oil and gas crash of 2015. The pain was amplified because Kinder Morgan overextended by taking on too much debt. Strained to make ends meet, it was forced to slash its dividend by 75%. Since then, Kinder Morgan has been in the process of reinventing itself, which starts by getting its balance sheet back in order.

Fast forward to today, and Kinder Morgan carries an investment-grade credit rating from Moody's. In June, Moody's concluded that Kinder Morgan's free cash flow (FCF) supports its ability to "modestly deleverage" over time. Kinder Morgan has gradually increased its dividend over the last few years. Today, it pays $0.27 per share per quarter, representing a high yield of 6.2% for the year.

In the table above, it's clear to see that Kinder Morgan has been gradually reducing its net PPE, total assets, and long-term debt. Strong FCF generation has supported the company's ability to pay down debt, but Kinder Morgan has also sold off quite a few assets. For example, it sold shares in Pembina Pipeline stock to help pay down debt in 2020 and early 2021. Last year, Kinder Morgan issued $2.25 billion in new senior notes and repaid $2.2 billion in senior notes -- effectively leaving its long-term debt position nearly unchanged. But aside from 2020, it's generally been using cash to pay down debt.

At first glance, it may seem that Kinder Morgan's business is worth less than it was a few years ago -- but not all assets are created equal. Rather, Kinder Morgan has been trimming what doesn't work and keeping the assets that can generate positive FCF. 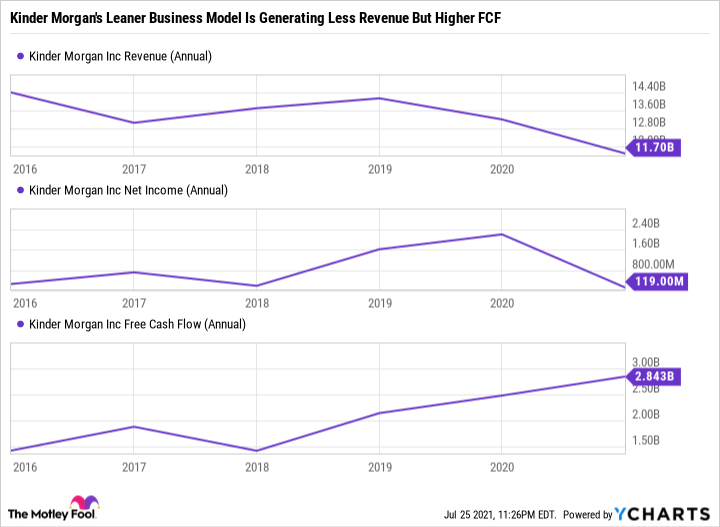 As a result of selling assets for a loss or writing down the value of existing assets, Kinder Morgan's net income has been all over the place. And given that its business is leaner, it isn't all that surprising to see revenue trending down. However, these two metrics aren't really Kinder Morgan's focus. Rather, the company has repeatedly stressed its emphasis on increasing FCF. And to its credit, it's done just that.

Kinder Morgan's long-term goal is to maintain a debt-to-EBITDA ratio of 4.5. EBITDA -- or earnings before interest, taxes, depreciation, and amortization -- is a useful financial metric for determining business performance independent of some accounting factors. It's particularly relevant to Kinder Morgan since the company measures its performance mostly on its cash flow and not its net income or revenue. Specifically, debt-to-EBITDA can be useful because it shows a company's debt relative to how much it's earning. Therefore, if Kinder Morgan begins earning a lot more money, it could still have a lower debt to EBITDA ratio even if its debt were to increase. On the contrary, it could lower its debt to EBITDA ratio by paying down debt even if earnings are also declining.

At year-end 2020, it finished with a 4.6 debt-to-EBITDA ratio but reduced it down to 3.8 at the end of the second quarter largely due to ongoing debt reductions and strong EBITDA generation for the first half of the year. Investors can follow Kinder Morgan's debt-to-EBITDA to gauge the overall health of its balance sheet.